Narrowing It Down Using The X

As I have mentioned before, every few months I review the newest autosomal matches on my many Family Tree DNA kits to see which are the best candidates to investigate further with GEDmatch. Maybe a third of those respond to my inquiries and of those perhaps one or two, maybe three, will show anything useful. On this last round, I sent out about eighty-five inquiries and was surprised how many people got back to me in the first forty-eight hours. This is the story of one of these.

The match is a woman named Donna who was adopted and is looking for information that might lead her to her birth parents. One of her two matches with my families was this, a quite ordinary segment of 16 cM with seven Pikholz descendants.

Jean, Sarajoy, Judith and Amy are my sisters. Uncle Bob is my father's brother. Roz is my second cousin on my grandfather's side. Marshal is my double second cousin - our grandfathers are brothers and our grandmothers are sisters. The seven matches triangulate; they all match one another. So this looks to be pretty straightforward. This segment comes from either my great-grandfather Hersch Pikholz or my great-grandmother Jutte Lea Kwoczka.

But this segment is from chromosome 23, the X.The chromosome that never passes from father to son.

But that cannot be right either. Uncle Bob would have to have received the segment from his father, which is clearly impossible. Uncle Bob received this segment from his mother. That option works for my sisters and for Marshal, but Roz has nothing to do with my grandmother's Hungarians and Slovakians. The Pikholz and Kwoczka families lived in the Tarnopol area of east Galicia. 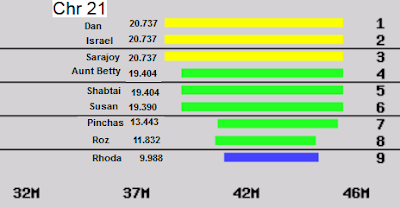 If this sounds familiar, it should. Three and a half years ago, I discovered a segment shared by two supposedly unconnected parts of my families, one being my grandmother's Hungarians and the other the Galicianers on the non-Pikholz/Kwoczka side of the family of my cousins Rhoda, Roz and Pinchas.

I have since found about forty strangers who share this segment with matches of anywhere between twelve and twenty centiMorgans. I wrote all of them, but have not gotten any firm leads on how, when and where my two families connect. It is a good ways back, as the families have been in the same places since the mid or late 1700s, but it's recent enough to preserve this 20+ cM segment intact.

I have also written about this segment of chromosome 21 here, here and most recently here.

My guess is that the same ancestor who gave us the segment on chromosome 21, gave us the newfound X segment, though I cannot prove it. Until now, I have had seven surnames to work with, five from the Hungarians and two from the Galicianers. Of course there was no reason to assume that the common ancestor actually used one of those seven names - if he (or she) used any at all. But they were starting points.

Now, we know that two of those lines are completely irrelevant. The X cannot be from my third-great-grandfather Lasar Bauer or his wife Rosa Lowinger, because it could not have been passed to Cousin Shabtai Bauer. One of the forty "strangers" has a Bauer ancestor, so that was a candidate for chromosome 21. But it cannot be for the X.

The others are still possibilities simply because we do not have other known descendants of those families who might share the segments in question. We can neither confirm nor eliminate them. Here are the earliest known ancestors in each family.

On the Hungarian side:

Salomon/Yehoshua Selig STERN ~ 1805-1862, son of Izak Leib of Paks could have received this segment from his unknown mother.

Jakob GRUNWALD of Perkata whose daughter was born about 1806 could have received the segment from his unknown mother.

On the east Galician side:

Shimon Leib ZWIEBEL, ~1825-1910, son of Isak, from the Tarnopol area, could have received the segment from his unknown mother.

Ester Chava LEWINTER, ~1831-1907, from the Tarnopol area, could have received the segment from either parent. She is Shimon Leib Zwiebel's wife.

I would love to see some tests from any of these families. Zwiebel is probably the easiest place to start.

It feels like progress. I'll certainly notify the forty-odd strangers.