This blog is dedicated to my mother's first cousin Ethel Rosenbloom Klavan, the daughter of Uncle Hymen. Her fourth yahrzeit is this Thursday, 12 Kislev. It is one of my self-imposed kaddish days.

The disappearance of Julius Lichterman
My maternal grandmother Sarah Rosenbloom Gordon arrived in the United States before the First World War. She had been born and raised in Borisov - Russia then, now Belarus - as had her siblings and probably at least one of her parents. She died when I was eleven and we never had any meaningful conversation. And she never talked to her children about the past.

Her three younger full-siblings preceeded her across the ocean. Her unmarried sister Rachel Leah (Rosa) died the tenth of December 1910 (2 Kislev), according to her death certificate at age twenty-five . We think she was a bit younger. She was not married and had no children.

Another sister Shayna Liba (Sadie) was married to Julius Lichterman (Uncle Hymen referred to him as Zisal and the Lichtermans confirm that this is their Julius, the son of Joseph and Nechama.) She died the first of May 1916 (28 Nisan) and the death certificate says she was twenty-three. She was certainly in her late twenties. There were no children.

As I say, we know she was married to Julius Lichterman but the death certificate - which says "married" - has no space for spouse's name. Nor is there a space for "informant," though surely that would have been Julius.

After Sadie died, Julius disappeared. No one knew what happened to him. His own Lichterman family said he was so distraught at the death of his wife that he broke off contact with everyone, never to be heard from again.

My grandmother's brother, Chaim Benzion (Hymen), was the youngest and I knew him fairly well. Most of my discussions with him about family history were together with his daughter, Cousin Ethel Klavan.

It is my opinion that there was some sort of cousin relationship between the Rosenbloooms and the Lichtermans and I discussed the two families together here and here.Therefore I am interested in Julius as a family member, not just as an in-law. The Lichtermans said they were from Borisov, but were probably from a nearby town and when my grandmother arrived in the US, she said she was going to her cousin, who was married to Julius' sister.

The Rosenbloom sisters were active in revolutionary circles back in Russia and my own theory was that after their side won, Julius went back to what he expected to be the new socialist paradise. But I have no evidence of this. 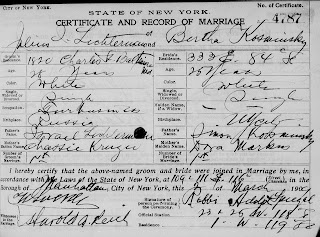 In the course of my research, I have never located a marriage record for Julius and Sadie. The indispensible New York City Italian Genealogical Group site (searched by Steve Morse's site) has a marriage of Julius I. Lichterman and Bertha Kosminsky in 1909. But he is someone else, as we see in the actual marriage record.

Julius Lichterman as Joseph Davis
I looked up Julius Lichterman on the immigration and naturalization pages at Ancestry.com and found fifteen entries.  Several refer to a man born 1877, naturalized in Pennsylvania, crossed the border at Niagara Falls in 1914 and was married to Bertha. That would be the man in the previous paragraph, although the ages are not quite the same.

Others appear on undated naturalization index cards in New York and Pennsylvania with no informaation. Not good for much.

One is for a man born in 1883 in what Ancestry's transcribers call "Barieve." He crossed the border from Mexico to California in 1945. The age sounds right and the birthplace looks like a bad transcription of Borisov.


He is indeed from Borisov. He is also known as Joseph Davies. (His signature looks more like Davis.) He was entering the US "to resume residence" at an address in Los Angeles. It seems to say that he was in California from 1909, though I cannot make out the actual location. "To resume residence" sounds like he had been away for some time, not on a vacation or business trip.

Is this "our Julius?" Well, for starters in seems unlikely that our Julius was in California from 1909 while his wife lived in New York until her death in 1916. But he is from Borisov and the age is right. On the other hand, perhaps he was in California when she died and that could explain why "mother's name" on his wife's death record was written in a different hand, probably later.

This Julius Lichterman died in Los Amgeles of 27 April 1949. He is listed in the California death index twice, once as we know him and once as Joseph Davis. (Not Davies.) The Social Security number is the same in both entries.

The death certificate tells us nothing at all, though it confirms both names. 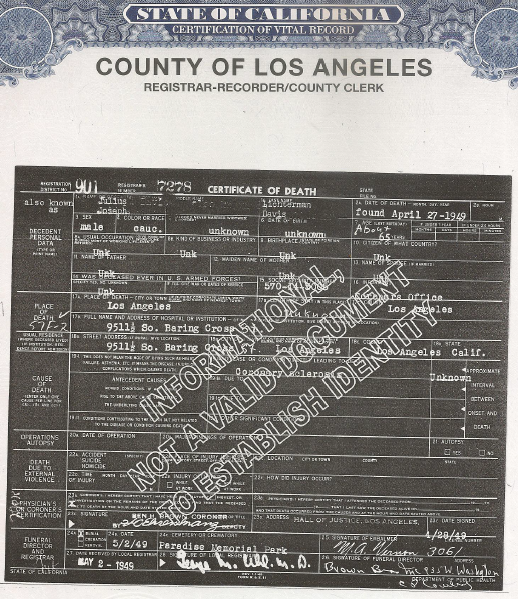 We ordered the SS-5 from Social Security - thanks to Galit Aviv for helping with both these documents. All they could give us was the Numident version, not the original inn his own hand..

I am not sure how to proceed. He seems like a loner. I expect that neither the cemetery nor a probate search would help.

It all looks so mysterious. Perhaps he was working for an intelligence agency or something.

I have more important fish to fry.