My grandfather died on the ninth of First Adar - that's Monday evening - sixty years ago. He has been dead almost as long as he lived.

Everyone thought I was too young to go to the funeral, or even the unveiling - something I resented until, well forever. He had had a serious heart attack just before I was born and there was some concern that I would bear his name, but happily he recovered. He kept the extra name "Chaim" that was added during the illness.

In the end, it was a "cerebral vascular accident." Twelve hours from onset until death. I knew without anyone's telling me.

Sometime in the 1940s, my grandmother's mother moved in with them, until her death in 1950.

My father and Aunt Betty both went to their weddings from that house.

The family lived in Zalosce, east Galicia, and my grandfather's first seven siblings (four of whom survived childhood) were born there. Maybe the next two as well, but Zalosce birth records are available only through 1890, so we are not sure. My grandfather, the youngest was born in Bogdanowka, in house 95, on the holiday of Hoshanna Rabba, during Sukkot.

Within a few years, the family began it's multi-stage migration to the Pittsburgh, where his father's sister had settled in the 1880s. My great-grandmother came last with the three youngest children, not through Baltimore or Ellis Island like the others, but through Montreal and the St. Albans Vermont border crossing. 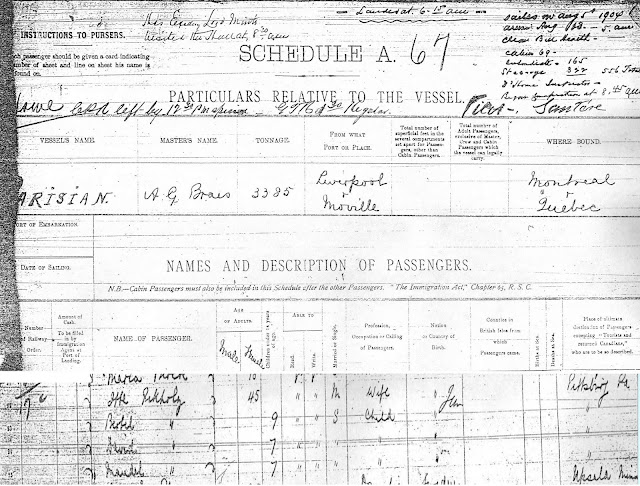 My grandfather was in the wholesale grocery business on Miller Street with two of his brothers, Uncle Joe and Uncle Dave, a business which closed when Uncle Joe turned sixty-five. I remember being there.

The children of the three brothers (the eldest, Uncle Max, had no children) were close in age and that and the business connection made my father's generation and mine closer with them then with the three sisters' children, who were older. (Not to mention that my grandfather and Uncle Joe married sisters!)

My grandfather had first cousins in Pittsburgh on both sides of his family, but the family connection didn't survive much after that first generation - until I began doing genealogy. 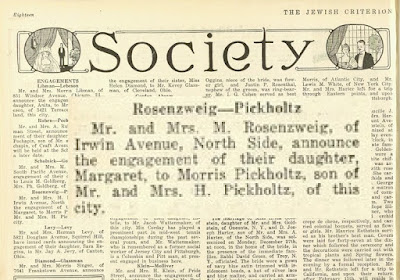 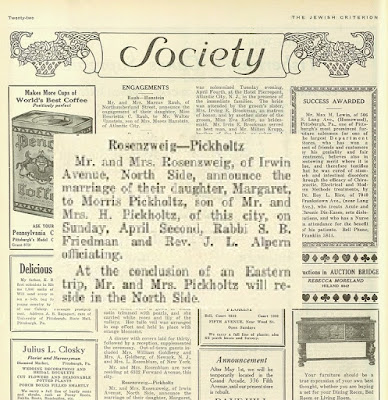 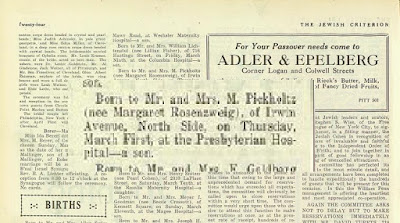 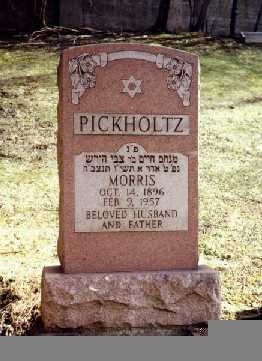 Housekeeping notes
I am speaking here in Israel in English - 16 March 2017, 7:30 – IGRA, Beit Fisher, 5 Klausner Street, Raanana
Lessons in Jewish DNA: One Man’s Successes and What He Learned on the Journey

I have had four proposals accepted for the IAJGS Conference in Orlando 23-28 July. No times or dates yet. But if anyone wants me to speak in the US before the Conference, now is the time to speak up.

And for the attention of any program chairs (or anyone who knows program chairs), I'll be available in the US late April-early May of 2018. Another bar mitzvah in Chicago.