Chromosome mapping
Two years ago, I had my first interaction with chromosome mapping, when I sat with Kitty Cooper in Salt Lake City. Kitty had developed a chromosome mapper, in which she could see which segments of her own DNA came from each of her ancestors. I liked this, of course and blogged about it here. The meager results looked like this: 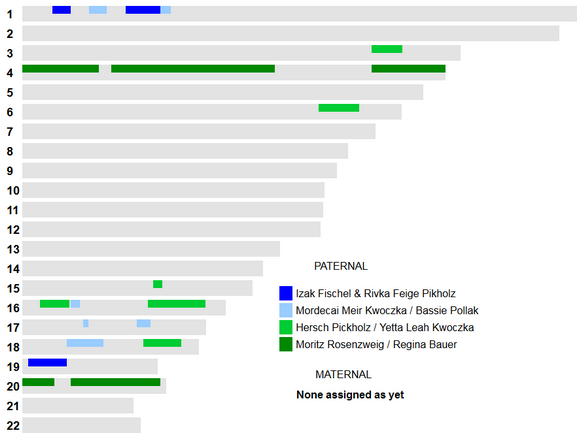 I didn't take this any further even as more family members tested, because I was more interested in the reverse - reconstructing the ancestors. But I knew it was something I should get back to and maybe four months ago, I actually put it on my to-do list.

The graphics aside, the theory behind chromosome mapping is fairly simple. If I have DNA that matches that of the descendants of my great-great-grandmother Rivka Feige from her first husband, then both they and I must have gotten those segments from Rivka Feige. In fact, five such descendants have tested and I match four of them, with a total of seventy-four segments. Fifteen of those segments are five cM or more and four are between 9.65 cM and 17.95 cM. (I am using 5 cM as a minimum because that is the default on the Family Tree DNA chromosome browser.)

Two of those segments are shared by more than one of the cousins.
I should be wary of the small segments, of course, and I must be aware that there were marriages between Pikholz family members during that period, so some of those matches may have come to both them and me from someone else.  I am, however fairly confident that the seven largest segments - 7.93 cM and greater - are from Rivka Feige. These.

I am going to do this from scratch, with tweezers, not using Kitty's mapping tool. I'll deal with the graphics later.

So I went to my paternal grandmother, where I have a bit more to work with.

To make sure that the smaller segments are not stray bits that came from someplace else, I looked at them vis-a-vis my four second cousins on that side (on the left) and (below) Uncle Bob and Aunt Betty.

Well, we know for sure that Debbie's two smaller matches are not from my mother's side. These look good for Zelinka.

Then I looked at my definite, documented Zelinka fifth cousin, Cindy. I have only two small segments of 7-8 cM with her, plus thirty under 5 cM.

The four second cousins don't match either of them nor does Debbie but Uncle Bob matches both and Aunt Betty matches one.

These are probably Zelinka segments, but I say that with something less than full confidence.

The only cousin on Nana's father's father's Rosenzweig side who is comparable to Cyndi and Debbie is my fifth cousin Miki, but I do not have a match with him according to FTDNA. What I do have is a nice set of matches with my half second cousin Fred. His only Jewish DNA is from his grandmother, Nana's half sister. So my matches with Fred are almost certainly either Rosenzweig or Zelinka.

Fred matches me (above) on only twenty-three segments altogether, ten of them over 5 cM and five of those 9.33-14.49 cM.

Aunt Betty and Uncle Bob (left) match him on eight of the ten. I saw no point in checking Fred's matches with the other second cousins.

Nana's mother side
On Nana's mother's side, all we have to work with besides the second cousins (without Fred) is my father's second cousin Shabtai. Nana's mother's parents are Bauer and Stern and we have no way to differentiate between them. Both sides are from Hungary - the Bauers from Apostag and later Kunszentmiklos and the Sterns from Kalocsa. 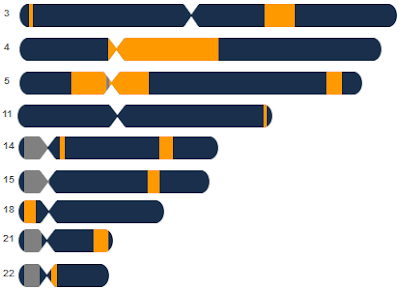 Marshal, Lee and/or Susan match eight of the twelve, but only four of the six large ones. None of them share the 19.53 cM on chromosome 18 or the 17.03 at the right end of chromosome 5. Below on the right, we can see that Aunt Betty and Uncle Bob also have only eight of the segments that I have with Shabtai, demonstrating that my father received some Bauer/Stern DNA that his brother and sister did not.

The Kwoczkas
Then there is the matter of my father's paternal grandmother's Kwoczkas. My great-grandmother had two brothers. One has a grandson - Bruce - who has tested. The other has a great-grandson and a great-great-grandson - Pinchas and Ben, uncle and nephew. I have eighty-four matches with these three, twenty-five over 5 cM. 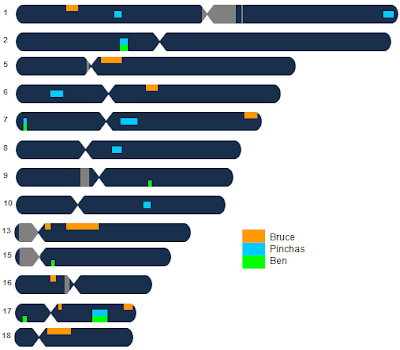 Of those twenty-five, ten are 10.49 cM or more. The four largest and two others are with Bruce. Three other matches of the top ten are with Pinchas and Ben's is identical with one of those three. The other fifteen are 7.71 cM or less and I think I'll ignore them for now.

Here are the remaining nine. No need to count Ben's which matches Pinchas. But I am going to move this comparison to a GEDmatch browser because there are more people are involved. (FTDNA's chromosome browser can take only five kits at once.)
So those matches that I have with the descendants of my great-grandmother's brothers are shared pretty liberally and convincingly by other descendants of my great-grandmother.

This is both partial and needs review. Expect to hear more on this in the coming weeks.

"Tip of the Iceberg"
A couple of weeks ago, I wrote about the inquiry into the possibility that the Skalat Pikholz Y-DNA goes back to Iberia. Our project administrator Rachel Unkefer spoke about the project in Seattle. You can see her presentation "Tip of the Iceberg" here. Very near the end, there is a reference to a red map pin which may be moving soon. That's us.

I met him once when I was fourteen and once when I went to see him in Miami three years ago. Regular readers will recognize his name as he was one of the first to test for our project.
Posted by IsraelP at 12:12 AM