I gave seven lectures before Seattle - six of them were "Lessons in Jewish DNA - One Man's Successes and What He Learned on the Journey."

My second night in the US, I spoke at Congregation B’nai Shalom in Buffalo Grove Illinois. The turnout was not large but included a few notable people in the audience. Two were from my school days - one my best friend from second-sixth grade with his wife. We've been in touch the last few years. Another was in my high school class; we didn't have much to do with each other then, but we have had some correspondence the last few years because his uncommon surname is the same as someone in my step-children's family. 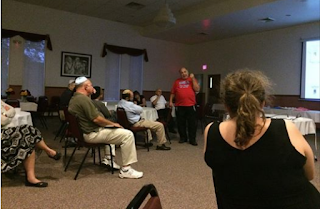 Another attendee was Victor Weisskopf who came out from Skokie. He was the first non-Pikholz to join my project at FTDNA, based on numerous matches with us. I mention him in one of my closing slides as someone whose most recent common ancestor with us is almost certainly in the pre-surname period - 1750 or 1720 or 1690.

In Part One, I mentioned the Pikkel descendant who may show that we came to Galicia from Sub-Carpathian Hungary. The man I had been after for a Y-DNA test did not show up ("I know who I am") but his wife and son were there and the son tested in Buffalo Grove. I'm looking forward to his results in another month or so.

I was staying at my sister's and although she was out of town, her older son was in the audience. 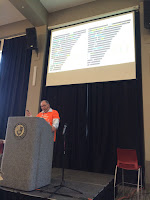 During GRIP, I spoke Wednesday evening. This was obviously a much more knowledgeable audience, though many of the GRIP students have no DNA background at all. (Imagine that!!) We used the main assembly area, as we did two years ago, and it was well received, with good questions afterwards, some book sales and many kind words the next days. I wrote at length about GRIP in Part Two of this series.

The audience included Aunt Betty and Uncle Ken and also my friend Tammy Hepps who has been in Pittsburgh for several years writing the history of Jewish Homestead.

The following Sunday, was the fast of the seventeenth day of Tammuz but it takes more than a hot day with no eating or drinking to keep me from a podium. In this case, it was the JGS of Maryland in Baltimore, where I had given my first DNA talk last year. This time their president Lara Diamond had me speak on "Beyond A Reasonable Doubt: What We Know vs. What We Can Prove," which has next to nothing about DNA.

While we were setting up, two women walked in, looking shall we say out of place. "Hi, I'm Wendy" said the younger one. My last blog before leaving home was about Wendy whose mother Carolyn matches thirty of my kits and she was hoping I could help identify Carolyn's father. Wendy is a serious and knowledgeable researcher and they - um - fit right in with the audience.
Also in the audience were my second cousin Beverly and her daughter Miriam. For those keeping score, that's at least one documented family member at each venue. The turnout in Baltimore was larger than anywhere on this trip aside from GRIP and the first Seattle presentation. (Good for you, Baltimore.) 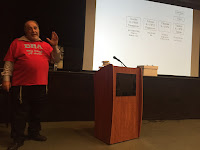 The following evening was the Fairfax Genealogical Society at the JCC of Northern Virginia. (In Part Two, I explained the genesis of this particular meeting.) Almost all of the fifty-odd seats were filled, though there was some expectation of more people from JGS of Greater Washington.

The audience included an old school-days friend from Pittsburgh and my second cousin Sam, Beverly's brother.

I was preceded by a comprehensive survey of the genealogy holdings of the local library.


I had picked up a rental car when I arrived in Pittsburgh from Chicago and it served me well for nineteen days. By this time, I had had only one semi-long drive, the Friday afternoon from Pittsburgh to Baltimore. (Remember, I am no longer used to American distance driving as all of Israel is not that big.) After Fairfax, the drives were longer; Tuesday afternoon to Rachel and Dan in Charlottesville (See Part One), then Thursday to Charlotte.

The early-evening meeting was sponsored by the Charlotte Mecklenburg Library and the Levine-Sklut Judaic Library, where I had set to meet a woman named Gay to discuss her matches with my families. It was a small audience, about thirty people, not as well-versed in genealogy as I had expected.

It was also the only venue where I had no family members. My Charlotte third cousin once removed was out of town.

I was to spend the night near Columbia South Carolina (more on that in Part Five) so this was my one night drive. My daughter was concerned about my night driving, citing some memories from when she was young. It was uneventful, even though about half the drive (it seemed longer) was dark back roads.

Sunday I spoke for the Triangle Jewish Genealogical Society in Durham. In fact that was the centerpiece of that whole part of the trip, the reason I went in that direction to begin with. Last summer, I had discovered a new Pikholz branch headed by a woman named Sheva Pikholz Weinstein whose children were born in Nemerow (Podolia) in the 1890s. A granddaughter lives in Durham and I had been trying to communicate with her daughter about the family and of course to get a sample of her DNA. It was my theory that Sheva is a sister of Necha / Nellie Rochester of Kansas City and California. One of Nellie great-granddaughters has tested but her matches are weak and the family is pretty much orphaned within the Pikholz structure.

So when I began putting this trip together, I decided to go to Durham to meet the mother and daughter in person. They came as did a second daughter (and husband) and the mother's DNA is now in the lab in Houston. As far as family information goes, their knowledge is sparse and they could not give me contact information for cousins, but I'm taking this one thing at a time. 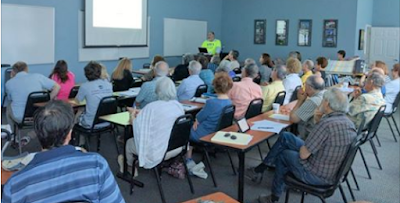 The turnout was excellent considering that it's a small group. They say that they never had thirty-seven people before. I added the story of Debbie Long to my presentation as she is the founding president of the local JGS. Debbie, who is a fourth or fifth cousin of mine on the Zelinka side, was not present, but we caught up with each other in Seattle.

The Durham audience was one of the best I have had, with many good questions and much discussion both before and after

Monday I drove to my cousin Linda in northwest West Virginia. (More on that in Part Five.) 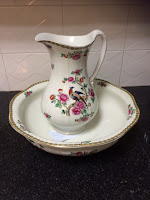 I was using Waze to get around and it worked very well, though occasionally sent me on more scenic routes than I would have chosen on my own. Such was the case between Durham and West Virginia, as Waze took me up Route 52 through Mt. Airy. But that was obviously meant to be.

Soon after crossing from North Carolina into Virginia, something possessed me to stop at a roadside antique shop. I had never been inside one before. While looking around, something large caught my eye. It virtually called to me and said "buy me." So I did. The manager wrapped the two pieces of porcelain very carefully and I put the basin into my suitcase and the pitcher into my hand luggage. I am happy to report that both arrived home safely and now stand on a small table in the dining room.

Sometimes driving is a chore, but on this entire trip I quite enjoyed it. I never turned on the radio and mostly sang. A lot of it I made up on the fly, both words and music. Hours and hours of singing solo in the car, for the better part of two weeks. Glorious!

After two days of catching up with myself at Mitch and Linda's house, I made my last significant drive, setting out mid-morning Wednesday to Cincinnati. I decided I could manage without Waze until I got closer and ended up seeing more of Kentucky than I had intended.

My final pre-Seattle lecture was at noon Thursday at the Genealogy and Local History Department of the Public Library of Cincinnati and Hamilton County. This was my smallest turnout and a significant part of the audience was library staff.

As I was setting up, I was very surprised to see Jeannie McClenahan Cecil, whom I had met a few months earlier in Jerusalem. Jeannie is a definite DNA cousin who had driven down from Spencer Ohio, three and a half hours away.

Also in attendance was my first cousin Ed, Aunt Betty and Uncle Ken's son. He is the one who initiated the contact with the library. So Jeannie and Ed are also DNA cousins and I enjoyed being able to introduce them.


The audience included the Director of the Cincinnati Hebrew Academy and one of his science teachers.

My Southwest flight to Seattle was scheduled to leave Dayton at 8:20 PM with a short stopover at Midway. The incoming flight was late but they turned it around quickly and we made the connection. We, being me and my luggage.

Part Five, the last of this series, is here.
Posted by IsraelP at 8:32 PM