A Joint Post with Lara Diamond of Lara's Jewnealogy

Dorit and Evelyne
Last week, Dorit sat in my office learning about DNA match analysis. Dorit has tested her mother Evelyne (nee Berger), her mother's sister and a few other relatives and has the benefit of another of her mother's family (Jason) who manages a few kits on his own. (Dorit's father's family is Moroccan and of less interest, at least for now.)

Dorit's tests were done with Family Tree DNA (FTDNA) as were some of Jason's and some of them have been uploaded to GEDmatch.

We went over the basic tools offered by FTDNA for autosomal analysis and looked at some GEDmatch tools as well. In the course of looking at Evelyne's matches in the GEDmatch Tier1 "Matching Segment Search" tool, I saw some segments that match any number of friends of mine in the world of DNA. And, of course, since all European Jews are related to one another multiple times, it cannot be otherwise.

(GEDmatch is free except for a few items in Tier1 which require a donation.)

Among those matches were several with the family of my friend and colleague Lara Diamond, who shows up on GEDmatch as less than four generations away from Evelyne. 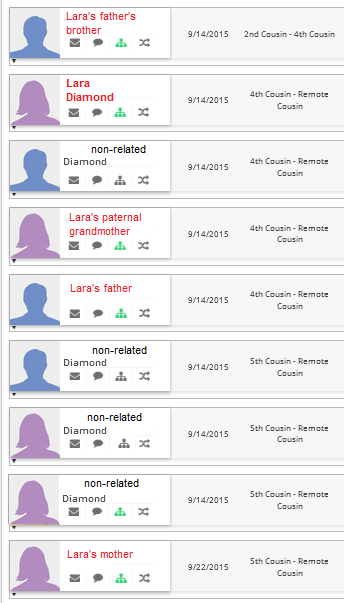 I cannot keep track of all of Lara's family, but I did have a look the list of Evelyne's nine matches with people named Diamond. You can see them here on the right, edited to eliminate the personal names.

Five are Lara's family, marked in red. In addition to Lara herself, we see her father, paternal grandmother and uncle. And also her mother, who is not known to be related to Lara's father..

So Evelyne is related to Lara through both of Lara's parents.

Five matches is just what a FTDNA chromosome browser can handle so I opened one for Evelyne and lined up Lara's five matches: grandmother, uncle, father, Lara herself and her mother.

I left the threshold at the default 5 cM and the results look like this. (I am displaying only those six chromosomes where there are two or more of Lara's family on the same segments.) I added to the display the sizes of the segments in cM. 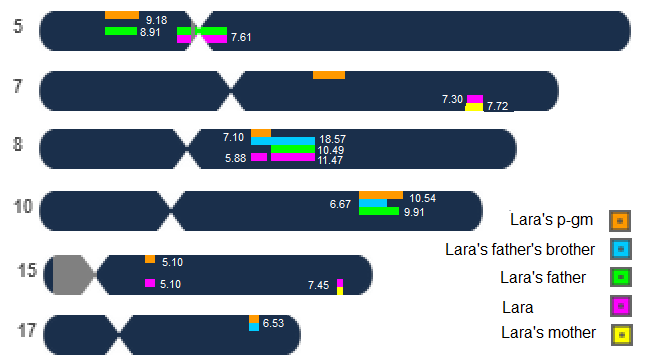 The two matches on chromosome 5 show segments from both paternal grandparents. On the left, Lara's father and grandmother have similar segments - clearly her father received this segment from his mother. On the centromere Lara and her father have an identical segment which is not from the grandmother, so it must be from the grandfather.

On the right ends of chromosomes 7 and 15, Lara has segments which are clearly from her mother.

Chromosome 8 shows a large segment (18.57 cM) where Evelyne matches Lara's uncle, but less than half of that matches the grandmother. In fact, the grandmother, the uncle and Lara herself all have the same starting point (64,372,741) and the uncle, Lara's father and Lara's second segment all have the same end point (85,095,990). The grandmother's segment ends at the same point where Lara's second segment begins (70,702,700). So clearly, the uncle has two adjacent - or nearly so - segments, one that he received from his mother and one from his father.

But it's not so simple
But this raises another question. How did Lara inherit her segment on the left from her grandmother if her father doesn't have it as well?

The same question comes up on the left side of chromosome 15 where Lara and her grandmother have identical segments of 5.1 cM, but her father does not. I ran that question on the ISOGG Facebook group and Blaine Bettinger made the (obvious!) suggestion to lower the threshold. Here is what came up: 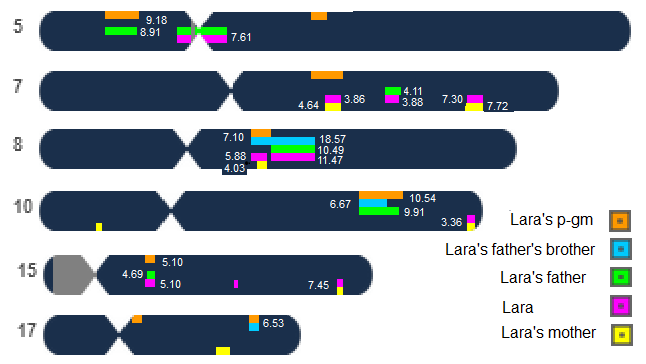 Lara's father has a match on chromosome 15 which is slightly smaller than those of his mother and daughter and the excess bits appear to be Identical By State (IBS) rather than properly hereditary. So far, so good.

The eight of Diamonds
But that does not resolve the anomaly on chromosome 8, where Lara still has a segment in common with her grandmother, but not with her father. (There is a school of thought to simply discard all the small segments of this sort, under the IBS banner, but I am not comfortable with that until it proves unavoidable.)

Lara's match with Evelyne is not from her paternal grandmother but from her mother.

Let's drop the threshold from 3 cM to 1 cM and see what happens.

Here we see that Lara's mother has three very small segments that did not appear before. The third of the three is 2.73 cM and it seems clear that Lara received those two right-most segments from her mother, with a bit of IBS detritus in between.

If we look at the same set of matches for Lara's family with Evelyne's sister,

the segments in question are very similar to the matches with Evelyne, but Lara's mother's match appears more complete.

My purpose here was to illustrate for Dorit the complexities of endogamous DNA, which the matches between these five members of Lara's family and Evelyne (and her sister)  show nicely. It is not my purpose here to figure out the multiple common ancestors shared by these two families. Perhaps we can do that later.

But let me give the floor to Lara, who will introduce her other family members into this analysis.
Posted by IsraelP at 1:30 AM