The family
I introduced the family of Berl Pfeffer and his wife Lea Pikholz when I wrote about their son Leo the Spy three years ago and revisited them here a couple of months ago.

Lea is one of two known daughters of Simon Pikholz and his first wife Dwore Waltuch. After Dwore died at age twenty-three, Simon married her younger sister Chana, who ended up in the US, as did her four adult children.

As for Lea and Berl, they had twelve children, nine in Kopicienice in east Galicia and the last three in Czernovitz where Lea died in 1913. When Leo went to the US in 1923, the passenger list names his closest relative as his father Berl, in Vienna. Vienna doesn't seem to have a death record for him, so he may have gone elsewhere.

One of the grandsons of Taube saw my post about Leo and that was the first I knew of Taube aside from her birth record. He filled in some of the other details. Of the twelve children of Lea and Berl, four died in childhood, five others grew to adulthood and had no children. Dwore lived a troubled life in the US with her son and we do not know what became of them. That left Taube and Joel.

I never saw a birth record for Joel, but his daughter Berta in Mexico City filed a Page of Testimony for him in 1999. Later I found Joel's Czernovitz marriage record to Mota Salter and Berta's 1912 birth record, also in Czernovitz. I had not been able to find anything further, but Taube's grandson told me that she had two children.

Amalie
A Tel-Aviv attorney I work with from time to time phoned me some weeks ago and reported that she saw an index reference to a Custodian of Abandoned Property file in the name of Amalie Pickholz.The file was from 1984.

I had first seen Amalie's name when the Central Zionist Archives accidentally allowed me to look at some Pikholz files in their basement. One of those showed that in 1962, Leo had written to the Jewish Agency in Jerusalem asking about his sister Amalie, who it turns out was living in Rumania. At some point she acquired or deposited assets in Israel, perhaps intending to come here later. Or perhaps she had lived here for a time. It was those assets that the Custodian of Abandoned property would have held.

The attorney had no idea what kind of assets were involved. It could be anything from a small bank account to a large building or a plot of land. Potential heirs would have to document what happened to all of her brothers and sisters, who had children, who their heirs would have been and where they are today. The assets would have to be substantial to make it worthwhile.

Additional inquiries revealed that Amalie had a deposit of cash of 1090 Israeli Sheqels, about $300. So much for that.

Berta
But it did remind me that I had a loose end regarding Joel's daughter Berta. I knew her name as Bertha Federmann from the Page of Testimony and I had the 1999 address as well. 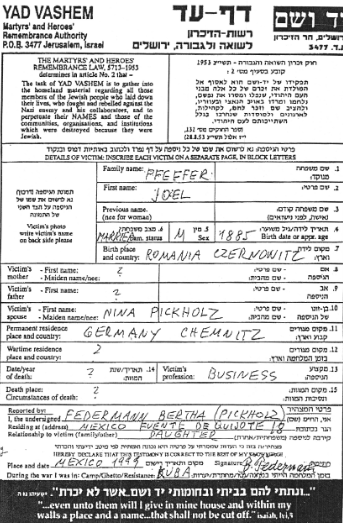 Another Yad Vashem document tells us:

Joel was murdered in the Shoah.

This information is based on a Deportation list found in List of the Jews deported from Belgium - Jewish Museum of Deportation and Resistence (sic)  at Mechelen / Malines.

I also had downloaded Joel's 9 November 1885 Kopicienice birth record from JRI-Poland, identifying his parents as we knew them to be.

A few years ago, I wrote to the address in Mexico that Bertha had given in 1999 but received no reply, nor was she to be found in the Mexican telephone directory. I made some efforts to find a death record or a cemetery entry, but I got nowhere and, being easily distracted, I left it for another time. At this point, I did not know the name of Mr. Federmann, Bertha's husband.

"Another time" came as a result of finding Amalie's $300 and I turned to the discussion groups at JewishGen where I learned that many Mexican death records were to be found at familysearch.org. There were two - Berta and Szaja Chaskiel. 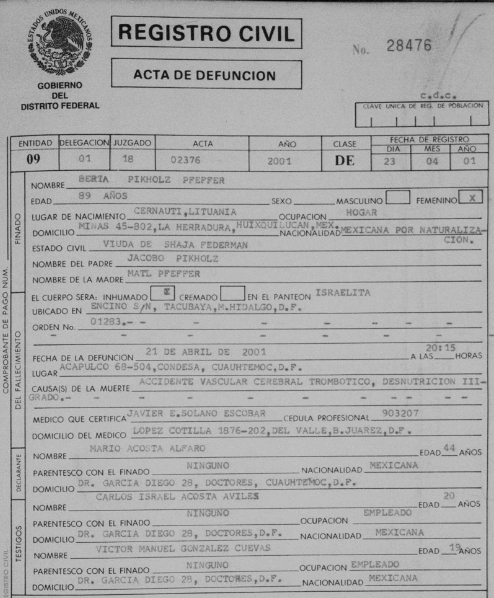 Berta Pikholz Pfeffer died at age 89, having been born in Cernauti Lituania, a naturalized citizen of Mexico, widow of Shaya Federman, daughter of Jacobo Pikholz and Matl Pfeffer. She died at 8:15 PM on 21 April 2001 in Acapulco. The informant and witnesses were not related to her.

On that day, 8:15 was after sundown so her date of death in the Jewish calendar is the twenty-ninth of Nisan.

I do not know why Berta herself calls her father's wife "Nina" on the Page of Testimony. Her name is listed as Matl everyplace else, including Berta's birth record. Perhaps it was a nickname. More likely she was a second wife, not Matl at all. I'll have to look into that some time.

Cernauti is Czernovitz, but it is definitely not "Lituania," no matter who ruled and how the map was drawn.

Her father is listed as Jacobo rather than Joel and I assume that is an error, as every other document calls him "Joel." 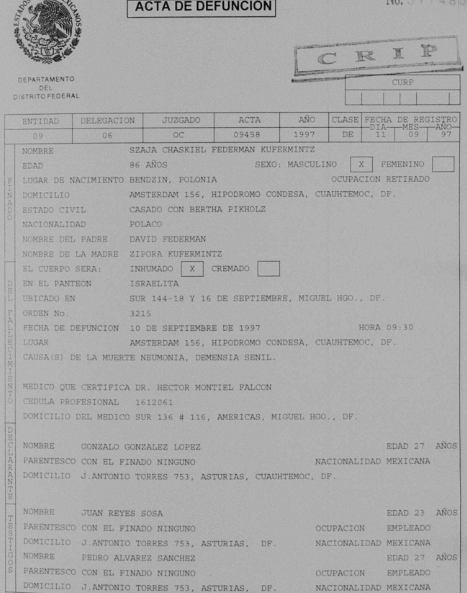 Her husband Szaja Chaskiel Federman Kupermintz died at age 86. He was born in Bendzin Poland and his nationality was Polish. Berta Pikholz is named as his wife. His parents are David Federman and Zipora Kupermintz. He died at 9:30 AM, 10 September 1997, which is the eighth of Elul. Here too, the informant and witnesses are not family members.

One of these days I'll see if I can get cemetery photos and track down the children.

Housekeeping notes
My 26 January talk for the Jewish Genealogical Society of Connecticut will be at Temple Sinai, 41 W Hartford Rd, Newington. They haven't set the time yet.
Posted by IsraelP at 5:25 AM