Adventures at the Population Registry

Two and a half years ago, I posted a piece about the obstacles erected by the Israeli Population Registry with regard to vital records - particularly death records.

Here is a new story. I was contacted last summer by a firm of international probate genealogists in London regarding a man in Israel who was named as an heir in the will of a woman in England. I had done work for this firm before. My contact there knew the name of the Israeli man and his address in a Tel-Aviv suburb as of 2012. I think she had written him and had gotten no response.

I was able to report that this man had been born in 1922 and I had the names of his parents and his identity card number. I further found that he was a widower and I located addresses for his two children. (He may have had more - I just found the two, a son and a daughter.)

But he no longer had a phone listing, so I considered that he might already be dead. He was not however in the database of the Burial Society of Greater Tel-Aviv, so if he was in fact dead, he was not buried in one of the six Tel-Aviv area cemeteries.

I wrote to London with all this information and gave my contact the addresses of the son and daughter, as well as my invoice. The addresses were a few years old and neither was in the online phone directory.

In mid-October she reported hearing nothing from either of them.

The Ministry of Justice maintains an online database of probate files so I had a look there. Not every death involves a probate, but in this case, I found him. The probate file had his name and identity number and was opened at the request of his son, whose name I already knew. The file was opened on the third of December 2014 and closed on the sixteenth of February after the state expressed "no interest." There was a will and the probate directed that it be honored.

It did not list a date of death. It did however say that the existence of the probate file was announced in the Yediyot Aharonot newspaper on the seventh of December 2014.

My contact explained that the date of death was critical. Her deceased is a cousin of the man in Israel. If she predeceased him, then his children would receive his share. But if he predeceased her, they would receive nothing and his share would revert to the estate. The cousin in England had died on the eleventh of November 2014, so it was not obvious who died first.

She needed a death certificate. My experience has been that the Population Registry has been more and more difficult about giving death certificates to people who are not "first degree relatives." Apparently the law allows them to give a certificate to anyone with "a legitimate interest" but they often choose to interpret that in the narrowest of ways.

I went to the library and pulled up the newspaper on microfilm. The announcement by the Justice Ministry had four columns of tiny print, showing the name, date of death, probate file number and the name of the person who had opened the file. I could see the man's name, but could not make out the numbers which comprised the date of death. Nor could any of the younger eyes in the library. 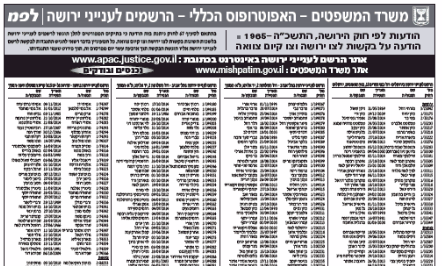 You can, no doubt, see the problem. Enlarging just makes it even more illegible.

I phoned the probate people in the Ministry of Justice and they told me that the date of death is 6 October 2014, which is a month before the cousin in England. But they would not give it to me in writing. I could probably find a copy of the death certificate in the probate file, if I had power of attorney and wanted to make two trips to Tel-Aviv.

The Population Registry suddenly felt more promising. I checked with them on the phone and they said that if the folks in London gave me power of attorney, there would be no problem going to their office downtown and getting a death certificate on the spot. In English. This was, in fact, something I had done a few years earlier, so I knew it should work that way. But the clerks in the office have also been known to say that they would not give a death certificate to anyone but the person named.

My contact in England sent me a power of attorney and about a month ago I wasted a morning of my life at the Population Registry in downtown Jerusalem. The first clerk didn't know what to do and she sent me to another clerk named Halutzi.

Halutzi told me in no uncertain terms that I had come to the wrong place.


a. They have never ever ever issued a death certificate in English

b. They can only give a death certificate to a person with a legitimate interest which can only be his children. even in a case where the children have no interest at all in settling this inheritance. Even if I have power of attorney from England. Even if the British power of attorney had been written in Hebrew. Even though the death certificate had no information that I didn't already know and the crucial part of which had already been published in the newspaper by the Ministry of Justice.

c. The Population Registry does not serve foreigners.  I should tell my British friends to try the Consulate.


Of course, the fact that I had, in fact, done this before carried no weight. Nor did the fact that they had told me on the phone that there would be no problem.

I went back to my office and sent a fax of complaint and requesting a solution. A week later I sent another and later a third. Then I phoned. And I phoned again and eventually got to a supervisor named Itzik.

Itzik said I should go back down and demonstrate that I have a legitimate interest. And I said "Why will he listen this time?" and the supervisor said "If you are not the son, he won't."

Before deciding I'd have to go to Tel-Aviv to see the probate file, I tried one more thing. The newspaper. Maybe they could give me a better copy of the Ministry of Justice announcement. 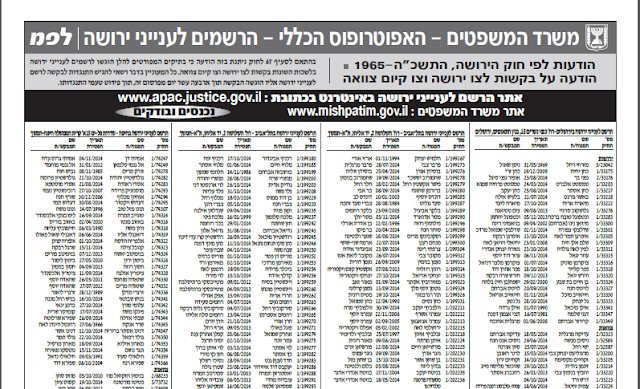 Much better. Cost about ten dollars. "Please," I wrote to my contact in London,"tell me this will be sufficient."


Jewish Genealogy Society of Connecticut, 26 January. Time and place to be determined.

I am also scheduled to speak on 13 April, here in Petah Tiqva. That one is, of course, in Hebrew.