Who Is This Samuel?

A few weeks ago, I began a blog about AGAD records with these lines:


A couple of weeks ago, I received a note from Rita, a Skalat Pikholz descendant in the US. She had just seen her mother's 1912 birth record in JRI-Poland, without a link to an actual scan. She wanted to know about getting the actual record.
With that she opened a door for me which - while not exactly overgrown with shrubbery - was a bit rusty.

Then I went on to discuss AGAD and its records. But Rita's mother's birth record has a story of its own.

Malka Chana was born to Chaja, the daughter of Leib and Ryszi Pickholz on 13 September 1912. The family has always known her date of birth to be one day earlier, but this sort of thing happens not infrequently. On the far right, the father is named as Szymon Figur. But here is where it gets strange. 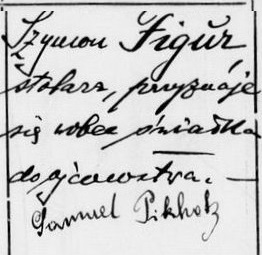 This, on the right, is where the father confirms his paternity.

Szymon (pronounced "Shimon") is the Hebrew equivalent of Simon. That is not a signature. The signature is below and it says "Samuel Pikholz" not "Szymon (or Simon) Figur."

We know that sometimes the signature is of the person himself, which this does not appear to be.

Sometimes the father is not present when the record is made and someone else attests to the father's paternity. In this case, Szymon went to the US before WWI on the Rijndam and his wife and daughter followed only after the war,

but he sailed on 12 July 1913 from Rotterdam, so that would not explain anything.

His closest relative in his country of origin is his wife Clara (Chaje) in Kozowka.

The person he is going to in the US is his Bril (brother-in-law) Louis Feier (Feuer).


So it's definitely the right man on that ship.

And besides, Chaje has only one brother - Shoil - and has no uncles or cousins named Samuel. Nor is there a Samuel in the family of Old Nachman Pikholz, which we have determined with the help of DNA to be closely related. So who can this be?

Did Szymon Figur suddenly adopt his wife's surname as his own? That happened from time to time, but Szymon Figur is never seen as Pikholz anyplace else. And although we say that spelling doesn't count, it's odd that if he took his wife's name, he was signing as "Pikholz" while the same document shows Chaje's parents as "Pickholz."

And although we know that Szymon was known as Sam in the US,
there is no reason to think that he began calling himself Samuel or Sam while still in Europe. That would have been very unusual, as Samuel is not a secular name like Markus or Herman.

In fact, when he went to New York ten months after this birth record, he was clearly going by Simon Figur. No Samuel and no Pikholz.


So we are kind stuck here. My instinct is to say that Szymon Figur signed his name as Samuel Pikholz, but I am far from convinced. I have not opened a new "Samuel Pikholz" in my database. Maybe something will turn up, though I cannot imagine what.

Housekeeping notes
On 1 December at 10 AM Pacific Standard time, I am to be interviewed about my book "ENDOGAMY: One Family, One People" on "A Savory Spotlight" with Sherry McNeal Savory and Tina Sansone. You can hear it in real time at http://www.latalkradio.com/content/savory-spotlight and there are podcast links on the left of that so you can listen later.

My winter speaking tour is coming together slowly but nicely. It will include a presentation at the prestigious New England Historic Genealogical Society in Boston on 27 January at 6 PM. My thanks to Jay Sage for setting that up.

Anyone who has access to FORUM - the quarterly of the Federation of Genealogical Societies - can see an excellent review of my book by Julie Cahill Tarr in the Fall 2015 issue (volume 27, issue 3). I hope to get their permission to post it here and elsewhere.
Posted by IsraelP at 3:28 PM