All My Foreparents is pleased to host Lara Diamond, President of the Jewish Genealogical Society of Maryland who blogs at Lara's Family Search and will serve as an Ambassador at RootsTech in February. Take it away, Lara!


Inspired by Israel Pickholtz's post comparing the amount of shared DNA in his endogamous family--and the different amounts with cousins between siblings--I decided to look at my own family's DNA matches.

Two Supkoff cousins also tested--Pat, a second cousin of my mother and uncle, and Ben, a second cousin once removed to all three, both descendants of Yeshaya and Zlata Tzipra (nee Sanshuck) Supkoff (formerly Zubkis).

Pat is descended from Yeshaya & Zlata Tzipra's son Louis:
Ben is descended from their daughter Frances.  Note that Ben is doubly related, as his great grandmother Frances Supkoff married her first cousin Ben Supkoff, son of Yeshaya's brother Yossel.
And lastly, a third cousin once removed of my mother and uncle, Jonathan, tested; he is an Eizikovics cousin, related on my maternal grandmother's side.  Note that Jonathan's great grandmother Reiza was born an Eizikovic and married one as well, and they were likely related prior to marriage, so he has an extra dose of "Eizikovic" in his ENA.


And here they are, laid out in a traditional box-chart, with those who tested in yellow. 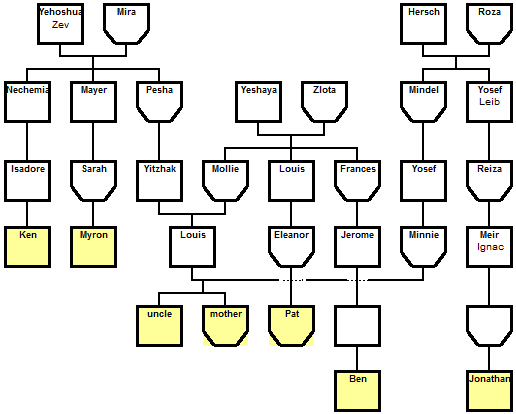 So how do all of these cousins' DNA overlap with my mother's?  (The two numbers for each person are number of matching segments greater than 5cM and total matching cM.)

My mother and her three known second cousins once removed who have tested have a wide variety of shared DNA--from Ken with whom she shares 281cM over 14 segments to Ben, with whom she shares only 128cM over 7 segments--even though he's should have an extra dose of Supkoff from his two Supkoff great grandparents.  Myron falls somewhere in the middle with 181cM shared with my mother, but divided over 12 segments.  Note that while Ken and Myron are related to my mother in the same way and have nearly the number of segments, Ken's segments are significantly larger than Myron's--giving a total more than 50% more shared cMs than Myron.

Note: Although all Myron, Ken and Ben are all 2C1R to my mother, Myron and Ken are one generation ABOVE her and Ben is one generation BELOW her. That should not matter in the kind of analysis I am doing here.

Pat, a known second cousin, shares 182cM with my mother over 9 segments.  Even though Ken is another step removed from my mother than Pat, he is a much stronger match.

And then there's Jonathan, a known third cousin once removed.  My mother shares 160cM with him, over 6 segments, a pretty strong match for that level of relative.

My uncle is obviously related to each of these five individuals in the same way as my mother.  But how do the amounts of shared DNA vary between these two siblings and the five known cousins?

Looking at the known second cousins once removed, my uncle shares less DNA with Ken than does my mother--but he shares more with Ben than she does. He shares significantly more DNA with Myron than my mother does (232cM vs 181cM)--even though Ken and Myron are both descendants of Yehoshua Zev and Mira Lefand.  His match with Pat is a better one than my mother's.

Jonathan's DNA has much less in common with my uncle than with my mother.  While my mother shared 160cM with Jonathan, a very decent match, my uncle only has 79cM in common.  Had I only tested my uncle (which was originally the case--my mother only tested in the last few months) [This is the punchline - IP], I would have discounted Jonathan of a match of much interest.

So my conclusions?  Similar to Israel Pickholtz, my Ashkenazi family has much better matches than would be expected in a typical non-endogamous family.  And as he has also stressed, testing siblings can potentially get good matches that one wouldn't have gotten with only one sibling's test.  My uncle's much better match with Myron and my mother's significantly stronger match with Jonathan show that clearly.

Thank you, Lara, for sharing your DNA experience in the critical area of siblings and differing cousins.


Housekeeping Notes
On 1 December at 10 AM Pacific Standard time, I am to be interviewed about my book "ENDOGAMY: One Family, One People" on "A Savory Spotlight" with Sherry McNeil Savory and Tina Sansone. You can hear it in real time at http://www.latalkradio.com/content/savory-spotlight and there are podcast links on the left of that so you can listen later.

I should be able to announce more of my US speaking schedule next week.
Posted by IsraelP at 6:00 PM