DID UNCLE JOE EVER LAUGH?


This week we will mark the yahrzeits of Uncle Joe and Aunt Helen - she on Tuesday 19 Sivan, he on Wednesday 20 Sivan.  Fourteen years apart.

Uncle Joe and Aunt Helen are the older brother and sister of my father's parents. They lived in the neighborhood, on Morrowfield Avenue, or as my father used to say, above the Squirrel Hill tunnel. They were married fifty-two years, from Lag BaOmer the week before her seventeenth birthday. Aunt Helen loved saying that she was married when she was sixteen. 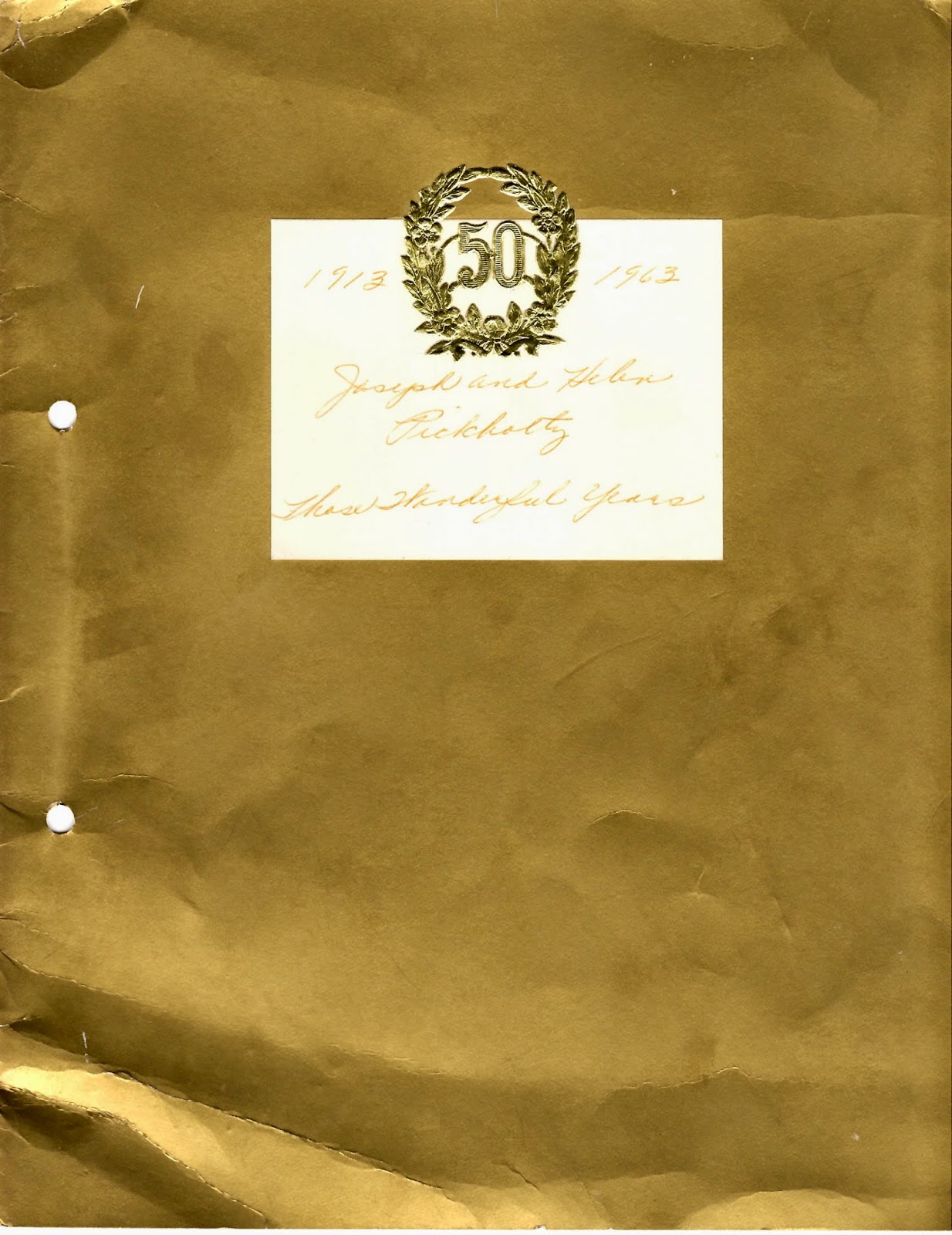 There was a big party for their fiftieth anniversary. We, of the younger generation were not invited. I was old enough to think I should have been there.

Uncle Joe was born Izak Josef Pickholz in Zalosce, east Galicia at the end of Pesach 1890, but like all our family's Isak Josefs of that period, was called Josef. His father's parents were Isak Fischel and Rivka Feige,  almost certainly both Pikholz. Rivka Feige's father was probably the "original" Isak Josef who died in 1862 at age seventy-eight.

He went to the US in 1903 with his father. Uncle Max had gone first, then Aunt Becky and Aunt Mary. His mother and the three youngest went about a year later. They landed in Baltimore on a ship called the Cassel and joined the older children in Pittsburgh, passing through countryside which looked remarkably like where they had come from.

When I began asking around a few months ago if anyone had ever seen Uncle Joe laugh, or even smile, Aunt Betty said "He must have." Well yes, he surely must have. 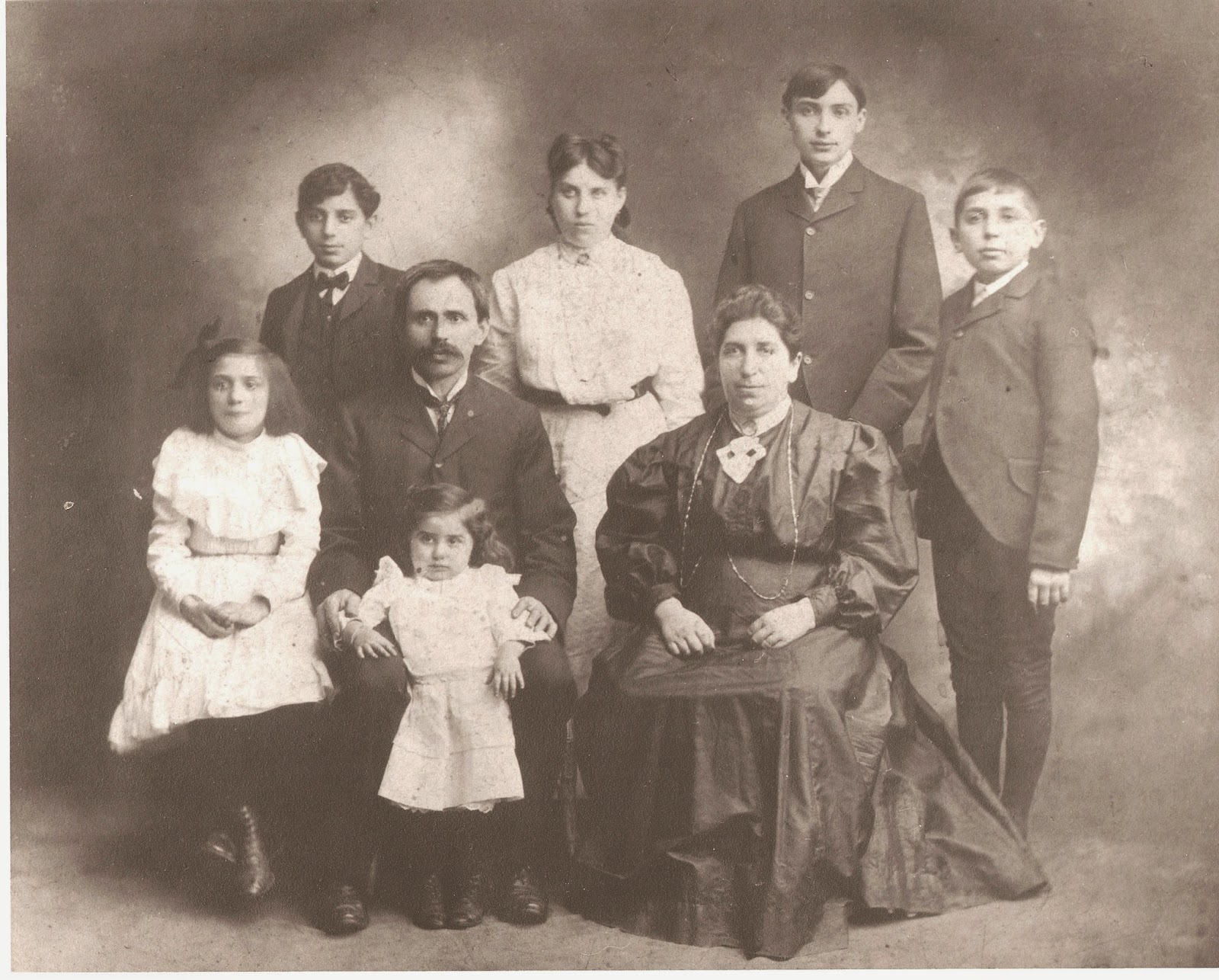 Aunt Helen was born in Budapest in 1896 and named after her mother's eldest sister Ilona Bauer, who had died in 1893 at  age thirty. She had been married to Lipot Weisel and I have no idea if they had children. Aunt Helen's Jewish name was Dobrisch and she hated it, even going so far as to instruct us that if we ever wanted to name a child after her, we should find some other way to do so.

The Rosenzweigs were fairly well off in Europe. My great-grandfather went to the US in 1901 and my great-grandmother and the children went together sixteen months later.

Aunt Helen and Uncle Joe were blessed with their only child in their twentieth year of marriage. Margie too always smiled.

There are pictures of him [Uncle Joe] smiling (from the 50th anniversary party, at least). I can only remember being at 6315 [Morrowfield Avenue] a couple of times, and they were "festive" occasions. I honestly don't recall anyone being unhappy, but I can't specifically recall looking at Uncle Joe and seeing him laugh. There were always opportunities, though, as Cousin Harry was there, too, and everyone laughed because of him.


That party was apparently not a terribly formal event, as the following pages will show.  (remember, I wasn't invited.) Thanks to Amy and Larry Kritzman for finding me a copy on short notice. 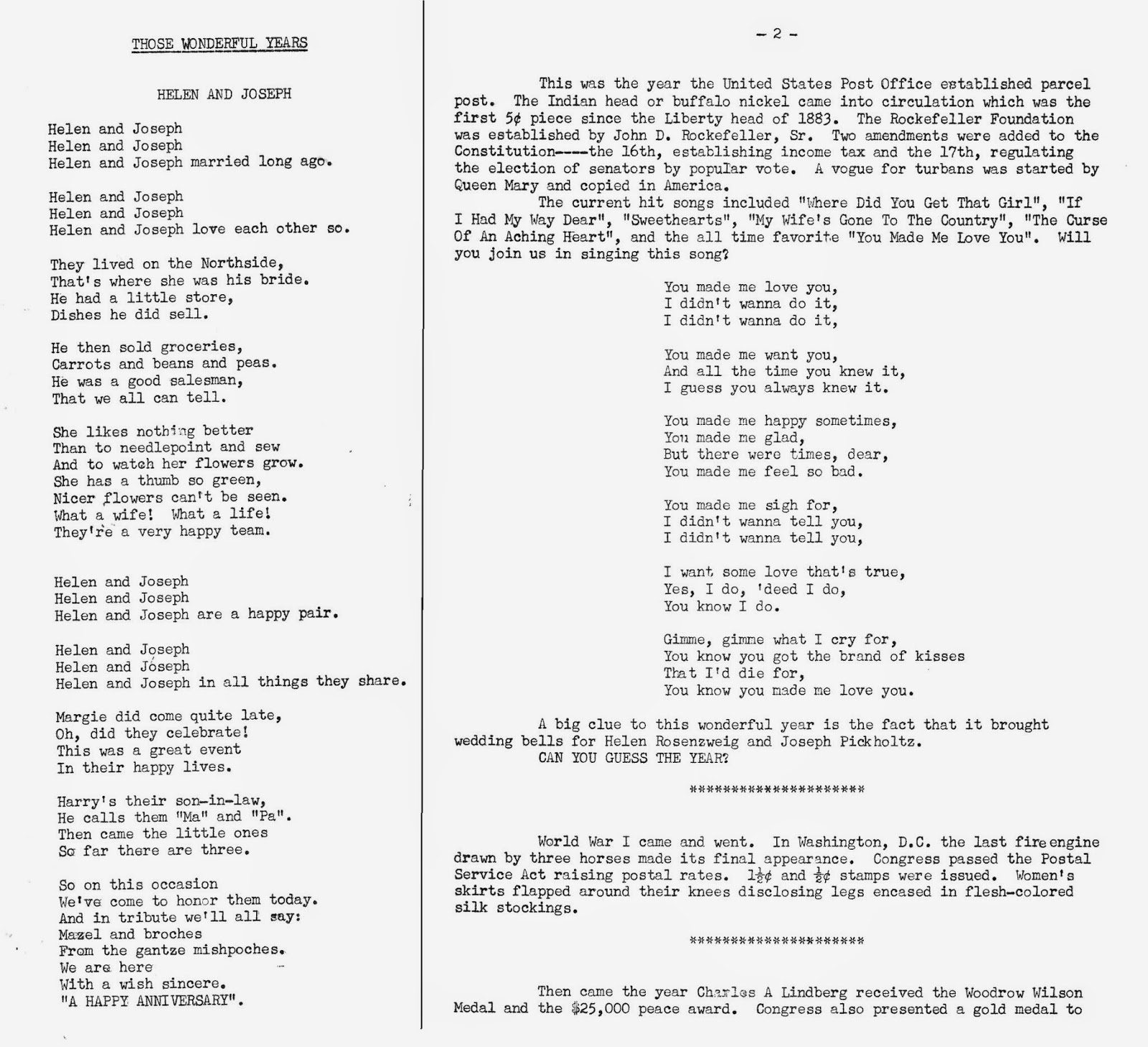 Uncle Joe was in the wholesale grocery business with his two younger brothers, Uncle Dave and my grandfather Morris. Uncle Dave was a wry and sardonic sort and I'm told that my grandfather - who died when I was nine - was the happy one, so it makes some sense that Uncle Joe, the eldest of the three, would have been the serious one. 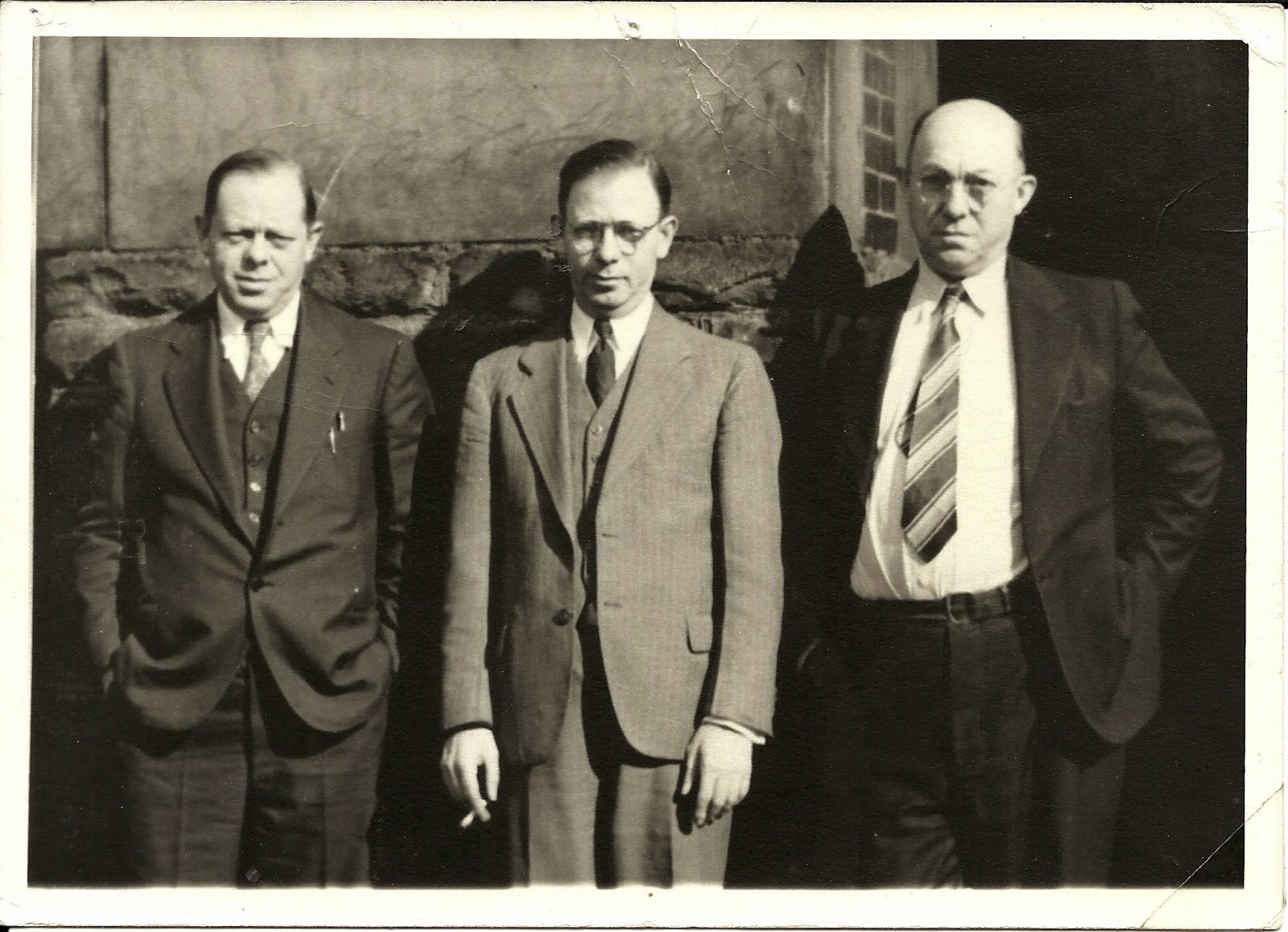 I always knew him as very thin, almost scrawny. But that was not always the case. Before his heart attack, Uncle Joe was significantly heavier, as in this 1941 picture.

They closed the business when Uncle Joe turned sixty-five.

I asked Cousin Herb - Aunt Mary's son and by far the oldest surviving cousin - how he remembered the brothers. He wrote:

I have the same recall as Betty.  He was a sourpuss.  Now, My uncle Morris a jolly one, like a happy Irishman;


Uncle Dave a gentle sweet person with a backbone to stand up for his convictions. All three melded together so well in the business, but you should have heard the arguments at the weekly Bridge or Pinochle game.

They were card players, the lot of them. Not just bridge and pinocle but also canasta. The women too.

Aunt Helen was a character. During the war she was very active in war bonds and was honored by christening some kind of warship. 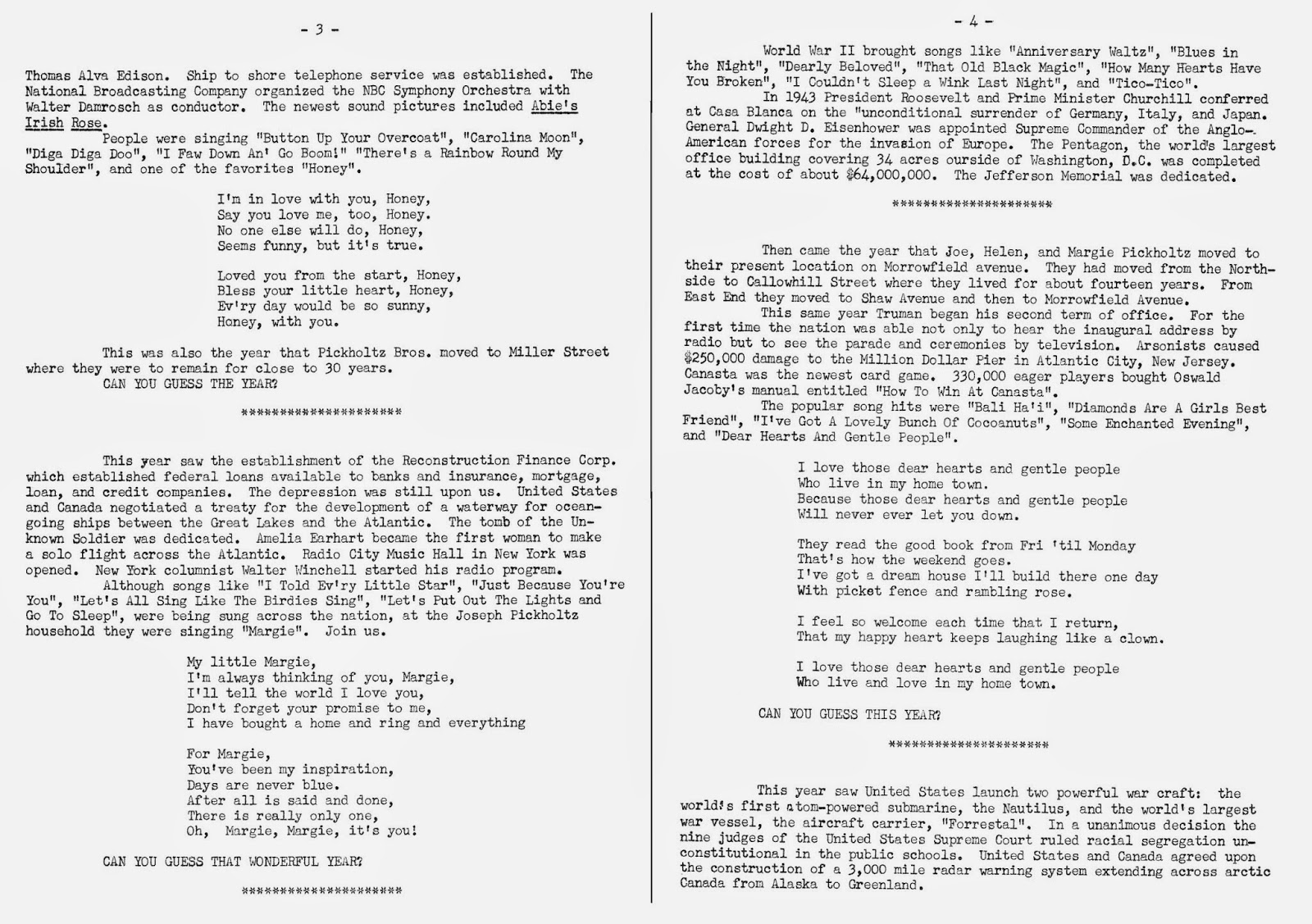 Aunt Helen was never bound by what other people thought. She would tell us jokes that she knew our parents would not have approved of ("What's the difference between mashed potatoes and pea soup?")

She would bring some cooked dish when invited, but would never say in advance. Aunt Betty would say "If you'd tell me, I'd know how to plan the meal." And there would be feigned insults all around.

The one thing which was totally predictable was birthday and Hanukkah presents. It would always be a silver dollar.

Uncle Joe  always - in my day - gave the impression that he was not completely well and my mother was always very solicitous of him. My mother also worried about how he saw us. Once he stayed with us for a couple of days and dinner one evening was left-over turkey. We were not allowed to eat the bones. Uncle Joe might think we were poor. 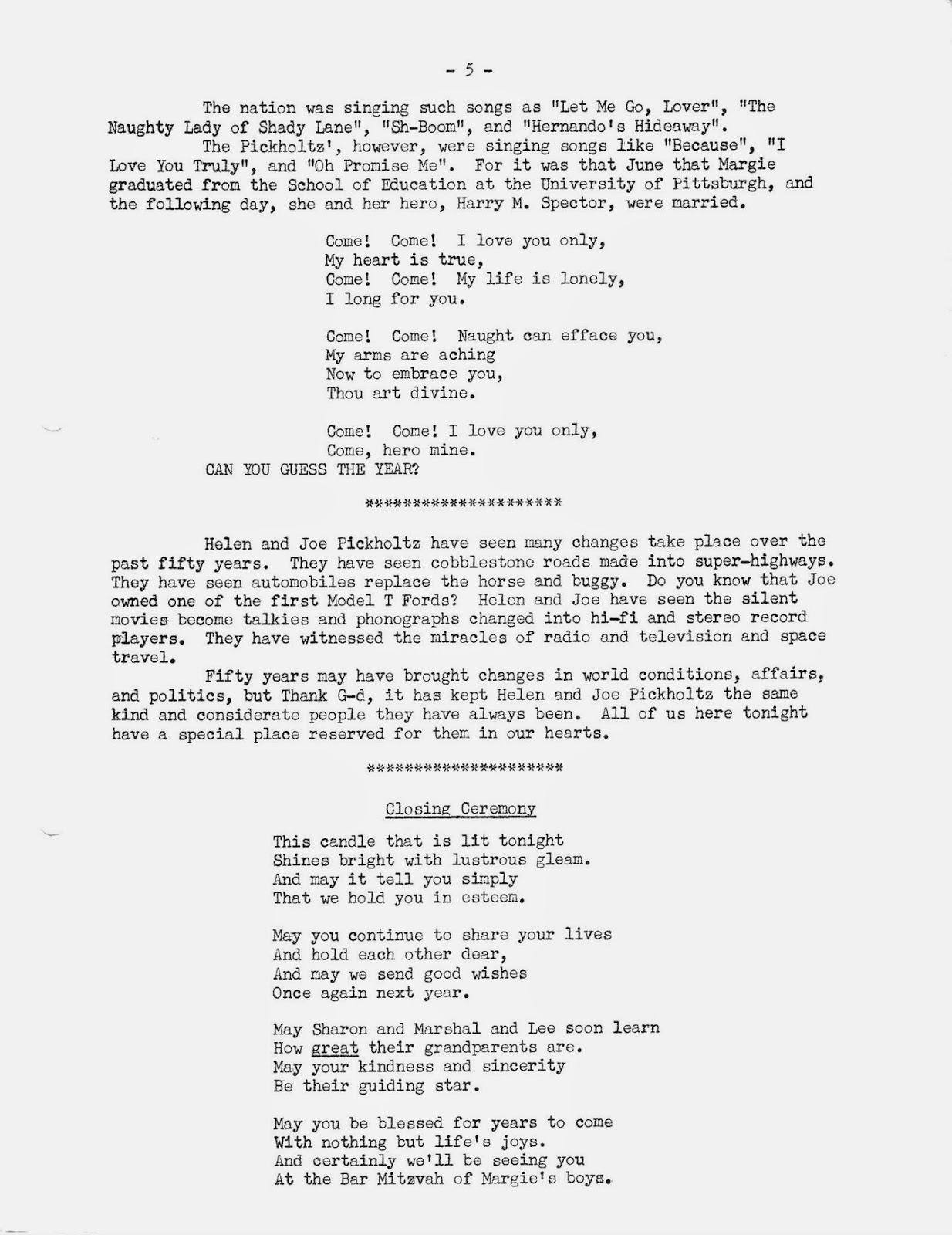 Amy suggested that perhaps because Aunt Helen "took up all the air in the room" - and she surely did - Uncle Joe was content to sit quietly and watch.

I supposed he must have smiled and laughed. But no one seems ever to have seen it.

The two couples, they and my grandparents, were close. All the way to the end.


Housekeeping notes
I have positively identified living descendants of Gabriel and Sara Pikholz of Husiatyn. Now I have to get them to talk to me. Not a simple matter. (Wait till they find out I want some DNA!)

My talk at the IAJGS Conference in Salt Lake City is one of those planned for their "LIVE!" program, so it can be seen by people who cannot attend. The panel I am participating in is also planned for "LIVE!" - the panel on Monday and my talk on Wednesday. As of now, I do not see any option to register for a single presentation. The cost for the program is $149 for the full week or $49 per day. They tell me, however, that speakers will receive free copies of their own sessions, which can be shown to family members.

In the last two weeks, six seven eight nine! family members have ordered DNA tests, including second cousins of three of my four sides.
Posted by IsraelP at 7:30 AM