DNA says We Are Fourth Cousins (Part 2 of 2)

Part one of this piece appeared last week, with the first of two examples. I am repeating the opening paragraphs here.

Bennett Greenspan, of Family Tree DNA, opened his presentation at the IAJGS Conference in Boston with something like "If we just looked at the raw data, all those of Ashkenazic Jewish descent would show up as second cousins."
This, of course, is a result of the relatively small pool of Jews in Europe a thousand years ago and the fact that for hundreds of years, most of them married within that pool. So your actual sixth and seventh cousins may look several generations closer because you have a handful of connections on your "other sides" two-three-four or more hundred years ago.
So Bennett says that FTDNA has an algorithm for its Family Finder (autosomal) test that takes this into account in order to give a more realistic estimation of cousinhood.


For comparison, they show me with forty-eight suggested third cousins.


The question is, are any of the suggested fourth cousins truly that. Let me bring two examples.
Now for the second example.

Dalia and me
I had long believed that Dalia was my fourth cousin. I'll spare you the long explanation, but my theory was this. 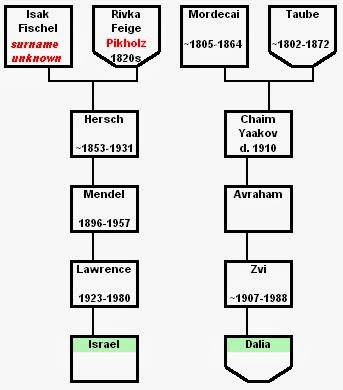 It appeared to me that the naming patterns indicated that my great-grandfather Hersch Pikholz had gotten his surname from his mother Rivka Feige and that she was a sister of Dalia's great-great-grandfather Mordecai. (Actually, it could have been the wife Taube who was the Pikholz sister of Rivka Feige, but I am trying to keep this explanation simple.)

Rivka Feige's husband Isak Fischel's surname was a mystery to me and I spent a lot of time examining Isak Fischels from all over east Galicia, looking for some clue to his surname.

This structure would have made their sons first cousins, our grandfathers second cousins and our fathers third cousins. So Dalia and I (marked in green) would have likely been fourth cousins.

Back in 2011, I did a Y-67 (male line) DNA test on the off chance that some match would prove to be from Isak Fischel's family.

When we took the plunge and began our family DNA project a year later, Dalia's nephew, Zachy, did a Y-37 test in order to compare him to other Pikholz families from Skalat. (In fact, he is a perfect match to the person I called "Y" in last week's example.)

But Zachy also matched me perfectly. That meant that the connection between Dalia's family and mine was not Rivka Feige, but Isak Fischel. The naming patterns still indicated quite strongly that Rivka Feige was a Pikholz, so my great-grandfather would have had a double dose of Pikholz DNA, one from each parent.

The calculation tool that Family Tree DNA provided showed a probability of about 93% that our most recent common ancestor was the father of Isak Fischel and Mordecai. There is still some chance that they are not brothers, but rather cousins.- and if so, we don't know whether first or second or even further. The science cannot be that precise.

In the course of our project, Dalia did a Family Finder (autosomal) test, as did several members of my close family. Her results showed her to be a "suggested third cousin" to my father's sister and a "suggested second cousin" to my father's first cousin Herb. Under the best of circumstances, they cannot be that close, as both cannot be closer than her third cousins once removed. But for our purposes, these results verify the idea that Isak Fischel and Mordecai are brothers.

Dalia's match with me is suggested fourth cousin." Perfect. Just what we wanted. I asked Bennett what he thought and he said I should definitely record Dalia as my fourth cousin based on the combination of our Family Finder results and Zachy's Y match with me.


Above is the set of matches that we have with Dalia on the seventh chromosome. Herb is the orange, Aunt Betty is blue and I am green. The purple is Lloyd, a certain-but-unproven third cousin of Dalia, an apparent descendant of Mordecai and Taube. This makes it clear that the connections we have with Dalia are all from the same source.

But it isn't really. First of all, our line has that "extra dose" of Pikholz DNA from Rivka Feige. So we almost have to be getting results that are closer than they ought to be. I guess that can explain why my aunt and Herb are a bit closer to Dalia than predicted.

But it still leaves a problem with my match with Dalia. She shows up as my "suggested fourth cousin,"  just like 341 other people. (That number has grown in the last week to 343.) Most of those are surely not my fourth cousins, but appear to be because there is DNA from several different directions. Why should Dalia be any different?

Is the fact that we appear to be fourth cousins actually evidence that we almost certainly aren't?

And it's even more complicated
Just for fun, I looked at the same chromosome #7 comparison for the same five people, but changing the person in the background. Here is what I got. 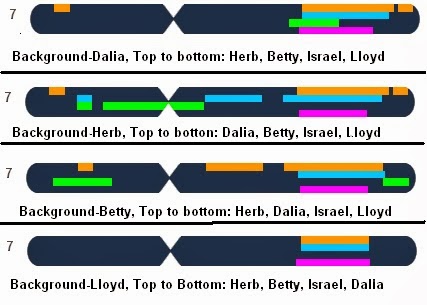 The block on the right with all the matches is pretty much the same, no matter who is the "background" - with one exception. With Dalia as the background, Herb, Aunt Betty, Lloyd and I have a nice overlap, all matching Dalia and matching one another.

These results seem to be telling us three things.
Or maybe not. European Jews have been marrying within the tribe for generations, so there are overlaps all over the place.

But clearly some of my match with Dalia comes from someplace else, other than .the last few generations of Pikholz. We only appear to be fourth cousins. Or not.

It gives me a headache.

I definitely have to learn more and I'm working on that.

2. My interview on The Genealogy Professional Podcast goes up sometime Monday.

3. Sunday, the day this  goes up, is the yahrzeit for my father's father. I had just turned nine when he died  and was not invited to the funeral. I never actually asked to go, but I really wanted to. I was unhappy with my parents for years about that. The first time I even saw his grave was seven years later when his brother was laid beside him.

I told my mother years later that I thought they had been wrong about this and she said that there were no children there (I am the eldest grandchild) and that some of the older relatives would have objected had I come.

I knew who she meant.
Posted by IsraelP at 7:30 AM