THE MATTER OF ROSA PIKHOLZ FROM TARNOPOL AND VIENNA

Next week in Florida, I'll be meeting with a number of Pikholz descendants, including the two granddaughters of Rosa. This ought to be a fairly simple story of a woman who escaped Europe with her daughter in the months before the War and settled in the United States. But there are complications, so I thought I'd lay out the story here as a way of organizing my thoughts before we meet.

Peter was born in Lwow, the others in Tarnopol or in Zagrobela, which is on the western outskirts of Tarnopol. I have no idea why they were in Lwow during that particular period.

In addition to the three unnamed sons, the youngest daughter Chaje died when she was a few days old and we have the death record.. 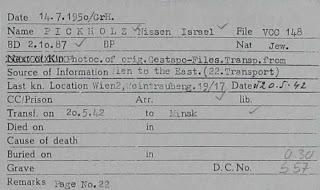 Peter died in 1916 during his military service and is buried in an unmarked grave in Vienna.

Nissen married his cousin Bassie Ruchel and was deported from Vienna in 1942 with his wife and six children. They were killed in Maly Trostinez, near Minsk.

We have a  passenger list is from 27 March 1923 (sailing date) which includes Ruchla Brandes, age 33, single, a tailor of East Galician nationality, last residence Vienna.  Nearest relative in Europe is her mother, Blime Pickholz of Vienna.  Final destination is her cousin Mr. & Mrs. Jak. Spanier, in New York.  (I  looked a bit for this man and his family a few years ago, but with no success.)

According to the manifest, Ruchla Brandes was born in Tarnopol and had previously visited the US in July 1911 and 1921, or more likely FROM July 1911 UNTIL 1921.  She intended to stay permanently in the US.  Her age is the same  as Ruchel Brandes, born in 1889 - and everything else fits nicely.

We also have the manifest for the earlier trip to the US - a July 1911 passenger manifest which includes a Rosa Pickholz, age 21 or 23, from Vienna, travelling with her cousin Bertha Silberman.  Rosa lists her nearest relative in her home country as her mother "Lime" who appears to be Blime. I have not been able to learn more about Bertha Silberman.

On the other hand...

According to the records of the Vienna Jewish community (IKG), on 16 October 1921, Leon Laufer (b. 1897, Lachowice) married Rosa Pickholz, daughter of Blime Pickholz and Abraham Brandes, born Tarnopol, 21 March 1892. We do not have a copy of the actual marriage record.

We have no birth record for this Rosa, but since there is a gap between Peter (1891) and the next birth (1895), an undocumented birth in that period is not unreasonable. But Peter was born 29 December 1891, so the 21 March 1892 birth date cannot possibly be correct..
This Rosa Laufer went to the United States with her daughter Edith in February 1939.  According to the passenger list, she was an American citizen due to her marriage 16 December 1921 to a citizen, but I have not found any immigration or citizenship record for her husband, Leon Laufer. (It is this daughter Edith whose two daughters I'll be meeting.) 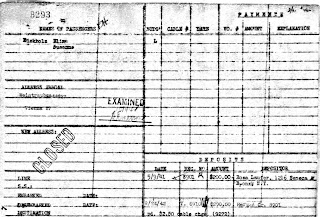 According to the passenger list, Rosa is forty-five years old, which means she was born in 1894, which makes more sense than 1892. (Note that Leon was born in 1897, so it would make more sense that his wife would have wanted to appear younger at the time of their marriage - not older.)

Once in New York, Rosa made an attempt to secure passage for her mother Blime and Nissen's eldest daughter Suzanne, but was unsuccessful. Blime died in Theresienstadt. 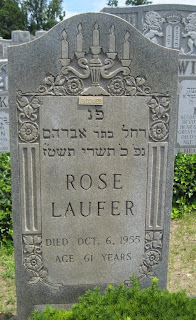 Nearly five years ago, the same month that I found living descendants of two of Blime's sisters, I found a series of Pages of Testimony that Edith (known as Dita) had submitted to Yad Vashem.

Those Pages included her grandmother Bime, her father Leon Laufer who was killed in France while on a business trip of some sort, her uncle Nissen (listed as Nathan) with his wife and five of their six children and an aunt Charlotte Rosenbaum of Vienna, with her husband and two sons. Also a few other of her father's Laufer family.

According to the Page, Charlotte was about fifty, so she would have been born about 1892. As I wrote earlier, there was a gap between the children so 1893-4 would have been reasonable. 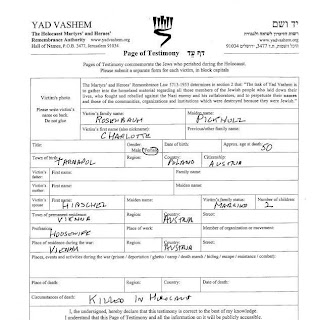 We have no Charlotte among the birth records and the only daughter other that Ruchel and Rosa is Chaje, for whom we have a childhood death record.

I spoke with Dita on the phone and she could not tell me anything to help straighten out the apparent contradictions. She had no knowledge of any other brothers and sisters that her mother might have had, aside from Nathan, Charlotte and Peter the young Austrian soldier.

Rosa lived in New York and died in October 1955.  According to her tombstone in Mt Hebron Cemetery, she was sixty-one years old, which is consistent with the 1894 birth year.

The tombstone lists Rosa's name as Rachel bat Avraham, which is a problem considering that she has a sister Ruchel who is several years older and who was last seen entering the US in 1923, and identified as "single" at a time that Rosa was already married. Edith told me that it is "not possible" that her mother had been in the US prior to 1939.


Dita herself died less than six months after we spoke so we were not able to really discuss this as I wanted to show her the documents first. I plan to visit her grave in Florida next week.

I have not ruled out the possibility that someone in this story was using an assumed identity, but I have no idea how to test that theory.

Yet another Rosa from Tarnopol born in 1892 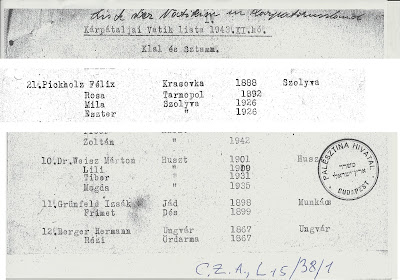 But there appears to be another. The US Holocaust Memorial Museum has a 1943 record of a Pickholz family from Szolvya (near Munkacz) who apparently tried to make aliyah.  The family consists of Felix (b. 1888, Krasovka), Rosa (b. 1892, Tarnopol) and Mila and Eszter (both born 1926, Szolvya). My guess is that Rosa is the Pickholz, not Felix, and she looks very much like she could be part of Blime's family, as we do not have other Pikholz births in Tarnopol during those years. Of course, that could not possibly be the case, but I am recording the story of this family here due to the similarities.

The Central Zionist Archives has this same record, but neither institution was able to provide further information, nor was ITS or anyone else.

The USHMM says to ask the CZA and the CZA says to ask the USHMM, as each claims it received the information from the other.. One would think that if there were forms for aliyah, the CZA would have them, but apparently not.

We know nothing about the death of Blime's husband Abraham Brandes and no one seems to mention him anywhere. It must have been before the War, as Blime appears as a widow. He could have died in Tarnopol during the period for which we have no records. I have no idea when the family moved to Vienna, but there does not appear to be a relevant death record there.

There is a 27 September 1894 death records for a Mendl Abraham Brandes in Vienna, but he cannot be Blime's husband - certainly not with a daughter Chaje born in December 1896.