At the conclusion of my presentation at the Conference last Tuesday, I showed what Family Finder (autosomal) results we had received thusfar. The close family consisting of my Aunt Betty, my father's cousin Herb and my fourth cousin Dalia, all fit together in a neat group. 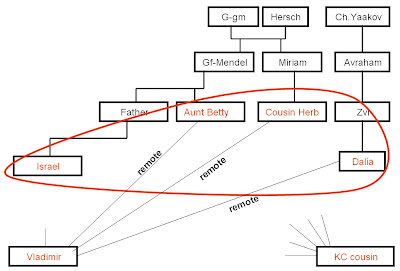 Vladimir, who I thought was a third cousin to Dalia and a fourth cousin to me, turned out to be nothing of the sort. He showed up as a "remote" (probably fifth or sixth) cousin of all of us.

The Kansas City cousin who I thought was a second cousin once removed to Vladimir showed up as no relation at all to any of us, including Vladimir.

On the other hand, Gadi of the Rozdol Pikholz families, who decided to begin a Rozdol DNA project on his own initiative, showed up as a remote cousin to all of us - including Vladimir and the Kansas City cousin. It was almost as though six generations or so ago, the Rozdol family separated from the rest of us.

That would require, of course, that the Skalat and Rozdol families are in fact from a common Pikholz source, which is different from what we had been assuming until now.

Just before the Conference - when I am drafting this - we received some additional results which I didn't include in my presentation - the Family Finder for Amos. (I discussed this family last fall.)

Amos' family is the only Rozdol family we have which leads up to a woman and we have no idea which of the male lines in Rozdol she connects to. Amos did both an autosomal test and a Mitochondrial test.

Amos came up as a third cousin to Gadi, which is reasonable. We will understand more about that once we see other Rozdol results. Amos came up as a remote cousin to my Aunt Betty but not to Herb or Dalia. This could be a matter of DNA distribution (he is actually remotely related to all of them) or it could mean he is related to her on her mother's side.

And Amos is a remote cousin to Joyce from Kansas City.

I then made my first attempt to use the chromosome browser, which shows which chromosomes are the ones that match. Here are the results. (The black background represents Amos.) 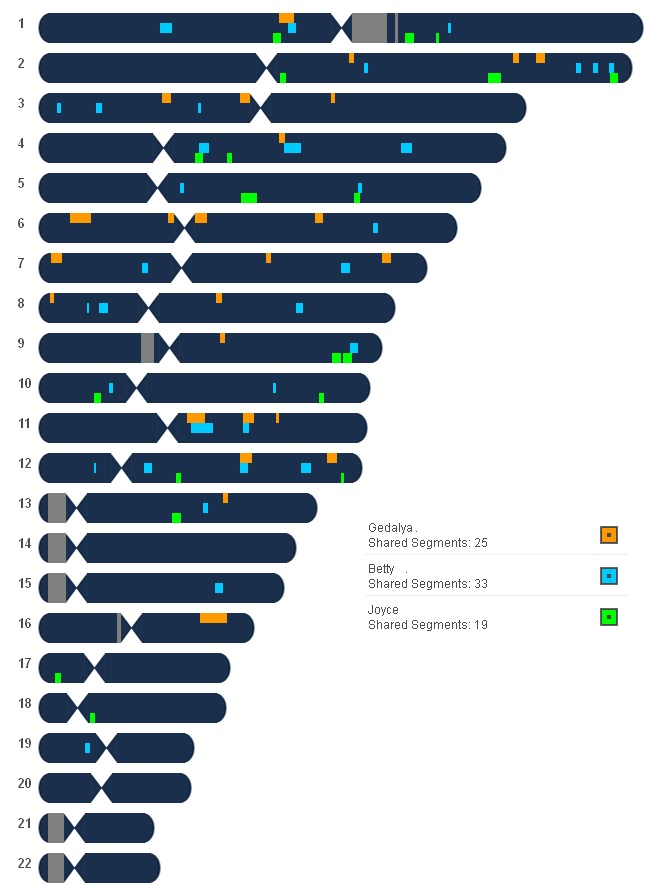 If you look at chromosomes 1, 11 and 12, you will see that Gadi (orange) and Aunt Betty (blue) have sections that match Amos in the same place. This makes it pretty clear - and I don't yet know how to do the statistics - that Amos' match with Aunt Betty is on the same side as his match with Gadi - the Pikholz side.

You can also see that in chromosomes 2 and 4, there are overlaps between Aunt Betty and Joyce. That seems to show that even though they do not have enough matching DNA to be considered a match, there is enough of a match between them and Amos that we can say they all match on the Pikholz side.

Perhaps most interesting is the fact that we now have results from two Rozdolers and both are matches with Joyce from Kansas City. Joyce has so far had no matches with Skalaters. It may be that the Kansas City family - who lived in Podolia - just east of Galicia and nearer to Skalat, is in fact more closely related to the Rozdol side.

I may just be getting the hang of this.

Oh, and one more odd thing. My second cousin once removed on my great-grandmother's Kwoczka side tested a few months ago. This is a selection of his matches. 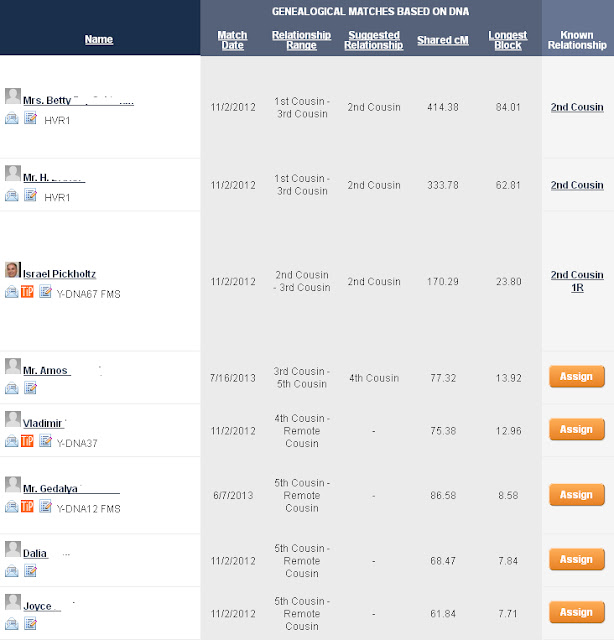 Wednesday evening, I had a meeting with Russ Maurer, a genealogist I know who has a background in micro-biology. He attended my presentation and said he enjoyed it. We discussed how much of these results are dependable and to what degree. He warned me about taking the results too seriously, which of course was the subject of my talk.

So let me make it clear. I have NOT decided that we can say for certain that the Pikholz family from Rozdol are part of our Skalat family. I am saying that I am way more open to that possibility that I was before. We'll know more as more tests results come in during the coming weeks.

An odd thing happened last week when a fellow named Vic in Skokie Illinois joined our family DNA project. I had though that it was by invitation only, but I guess not.It seems that Vic saw that he is a remote relative of several of us, so decided to join our group to see if he could learn about the relationship.

That seemed to me harmless enough, but not worth alot of my own effort. However, in speaking to him, it seems that he is a second cousin to a woman named Cynthia who is definitely of interest.

The DNA report claims that Cynthia is a second cousin to Aunt Betty and to Vladimir, a fourth cousin to Herb and a remote cousin to Dalia, Amos, the non-Pikholz Kwoczka cousin and me - but not to Joyce or Gadi.

I am not sure quite what to make of this and I think I'll wait until some more of our results come in. After all, we have results from only nne of our people and we have nearly twenty others whose test results are pending.