I suppose every language has a few surnames which become part of the local idiom, occasionally as a verb but usually as a noun or an adjective. Sometimes the name comes from a specific person, sometimes a family. 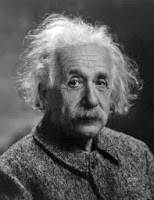 Einstein, for instance, is a synonym for "genius" and there is no need to explain why. Sometimes that would be used in a straight-forward sense, but often it's sarcastic, as in "Way to go, Einstein," which probably appears in some English-language literature, as well.

Rothschild, of course, refers to the banking family and means "filthy rich." "What am I, Rothschild?" is the Hebrew equivalent of "You think I am made of money?"

Both Einstein and Rothschild are easily understandable to a non-Israeli - even a non-Jew. No so Buzaglo and Malmilian.
﻿﻿
﻿
﻿ ﻿﻿ ﻿ Thirty-odd years ago, the State Prosecutor (and eventual Supreme Court President) Aharon Barak, was handling the high-profile case of Asher Yadlin, the candidate for Governor of the Bank of Israel, who had been caught in a financial scandal involving the ruling Labour Party. In making the point that the elites would not enjoy any favoritism that would place them above the hoi polloi, Barak said "The law for Yadlin is the law for Buzaglo," using a surname typical of Morroccan Jews.

Although the "Buzaglo principle" has undergone a few iterations over the years, the name remains the archtype for a regular guy who should have no aspirations to anything exceptional. (I always found the use of Buzaglo in that sense to be remarkably condescending, even before Barak became openly condescending to everyone. But that's me.)

Uri Malmilian played soccer for Betar Jerusalem years ago and later served as their coach. The team was good back then and Malmilian was much beloved, particularly among the Buzaglos of the Mahane Yehudah market.

I am not well-informed either about soccer nor about the goings-on in the Mahane Yehudah market, but my wife's son informs me that "Malmilian" means "very good quality" - as in "Every watermelon we have is a real Malmilian."

And then there is Pickholz.

A couple of weeks ago, I was at the National Library, where I do an occasional stint as a volunteer genealogy consultant for a program they are trying to put together. While I was there, Mrs. Elona Avinezer, the Head of the Judaica Reading Room at the National Library, showed me a website called JPress, which I had seen before, but never really worked with. JPress - or more properly Historical Jewish Press -  has interfaces in Hebrew, English and French. They have search capabilities for many Jewish newspapers in Israel and abroad, going back to the 1800s.

So I went to the Hebrew papers and looked up Pikholz. Among the results were three - from 1920, 1954 and 1960 - which used an expression which I had heard before but not for many years.

שוטה בן פיקהולץ
Literally that would be "Fool, son of Pickholz" but of course "son of" is not meant literally.

﻿
﻿
The 1920 reference is a cartoon in the long-defunct newspaper HaZefira. At the time, the only Pikholz here in the holy land was Dr. Eliezer Pikholz who ran an agricultural school in Petah Tikva (more on him in a few weeks) and it is highly unlikely that he would have been the model for this disparaging term. So my guess is that it was used in Europe. I am thinking that perhaps the trigger was the connotation of wood in the name Pikholz and that "ben Pikholz" meant something like "blockhead." Nothing personal or anything. I think. 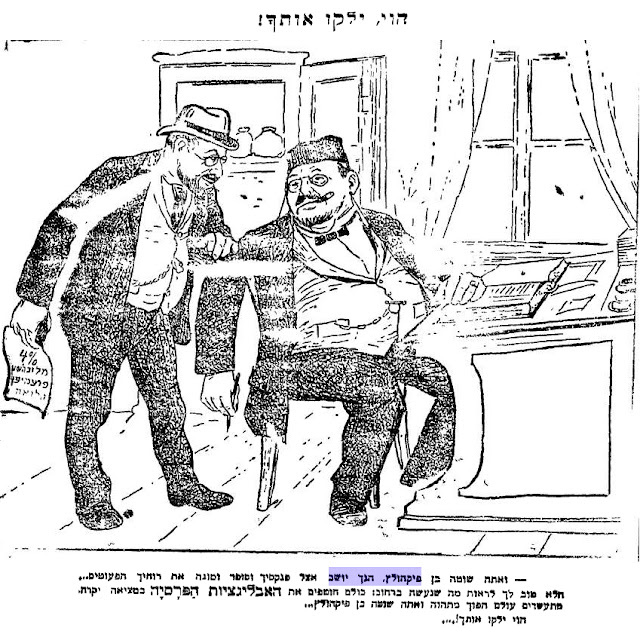 "And you are a fool-son-of-Pickholz, sitting over your notepads, counting and calculating your meagre profits. Isn't it better to see what is happening outside: everyone is grabbing the Persian oil debentures at an expensive bargain.  Getting rich in a world becoming upside-down and you, fool-son-of-Pickholz...
Oh, they will beat you!"
In the note the man is holding, it says "4% [something] premium loan"

The third reference is from a 1954 piece, also in Davar - perhaps a financial opinion column presented as a story. Two friends - Archi and Parchi (which would be like calling them Hoi and Polloi in English) - are  debating whether discovery of oil in Israel, as predicted by an American "expert," would be good for the country. At some point, Parchi calls Archi "Shoteh ben Pickholz." Everyone seemed to know what he meant.

"Blockhead" seems about right to me. But at least one Pickholz will tell you that he thinks Pickholz means "lumberjack" and the expression reflects a stereotype of a lumberjack as a person who is not very bright.
Posted by IsraelP at 7:30 AM