ISRAELI VITAL RECORDS AND THE BUREAUCRACY THAT KEEPS THEM FROM US

THE NATURE OF THE ADVENTURE (It is after all a government office)
The average Israeli knows Misrad Hapenim as the place to go for birth and death certificates, passports, name changes, identity cards and citizenship issues. These are all handled by the Population Registry. This same Misrad Hapenim deals with elections, urban and rural planning, firearms licenses, local emergency planning, foreign workers, financial oversight of municipal government  and more. Years ago, it was called "the Ministry of Internal Affairs" in English, but some years ago, they adopted the American-sounding name "Ministry of the Interior" which makes this US-born Israeli think of national parks, the Bureau of Mines, forests, Fish & Wildlife, water resources and the US Geological Survey.

As a genealogist, I occasionally I turn to them for a death record - sometimes for my own work, sometimes for a client, sometimes for an attorney who is helping a court abroad deal with an inheritance. Current policy permits the Population Registry to provide death certificates to no one but a "first degree relative" or an authorized representative.

So let's say someone in Europe dies and leaves some money to someone in Israel. But the person in Israel is dead. If the Israeli died after the person in Europe, his descendants get the money. If not, the money goes back to the estate. The European court will typically require an Israeli death certificate and will not accept a photo of the grave or a dated obituary. The attorney in Europe sends me a copy of his own authorization and a letter of appointment authorizing me to act on his behalf. I send all that to the Population Registry, together with the appropriate forms, wait six weeks, send a reminder, make a few phone calls and eventually receive the certificate by mail. There is no charge for this service.

Lately, when I phone for follow-up, they have said "Why are you doing this by mail? Just come into any of our offices and they'll do it on the spot."

MY RECENT EXPERIENCE
So in a recent case, I tried that. A woman had died in New York and she had neither children nor siblings, so the executors began looking for cousins. Two first cousins (brothers) had lived in Tel-Aviv and the executors needed their death certificates. They sent me the proper authorizations and I decided to take the applications to the local Jerusalem office to watch them "do it on the spot."

Here in Jerusalem, the Population Registry has a very busy office downtown, as well as a small satellite office in Gilo and my neighborhood is one of those permitted to use the Gilo office. But just to be sure, I called the central information number to see if the Gilo office could handle applications of this nature. The person who answered my phone call was not sure, but he went to ask the higher-ups and eventually told me that yes, I could do this in Gilo.

He was wrong. I waited in line maybe forty minutes and the clerk took my papers to the manager of the office. A few minutes later, I was back on the street, with nothing to show for my lost time. (I could hardly bill the client for that time, could I.)

I phoned the information people to find out why they had misled me. I'll spare you the story of the hour I spent trying to get someone to even answer me, but eventually I found someone who speculated that the folks at the Gilo office probably couldn't read English, so did not understand the authorizations. Lovely.

I few days later, I went to the main office downtown, arriving at seven-thirty to get an early number when they opened at eight. At 8:10, I presented my applications to a clerk who had no idea what to do, so she sent me to the manager. The manager looked askance, shook her head and suggested I try another back-office clerk. It took less than five minutes to get the certificates in hand, once I got to someone who was willing to issue them. (As I left, the manager said to the clerk "You actually gave them to him?!")

At least I know exactly where to go next time.

DESCRIBING THE POLICY
Six years ago, I wrote an article for the Israel Genealogical Society's quarterly Sharsheret Hadorot, which I am please to reproduce here, in part. 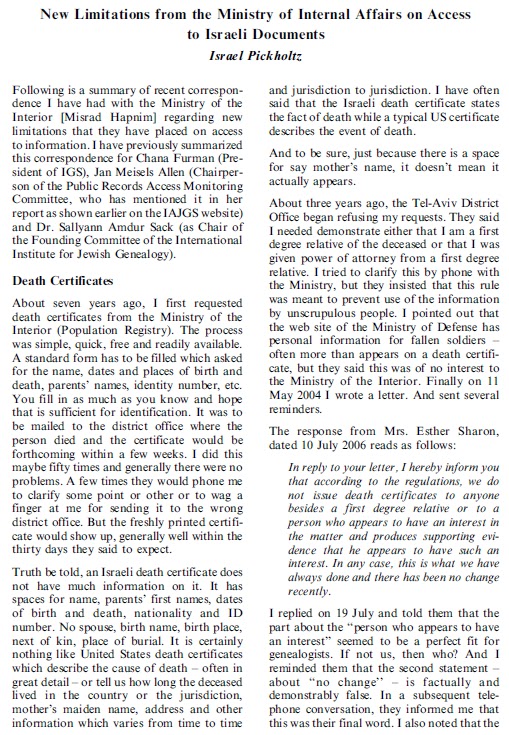 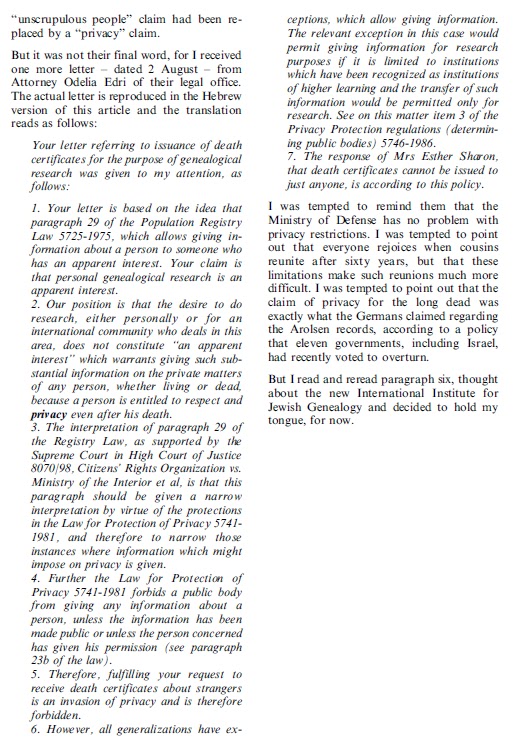 As far as I know, nothing has changed in the last six years.

Housekeeping note
I am speaking (in Hebrew) at the Israel Genealogical Society's Petah Tikva branch on Wednesday evening 29 May.  The subject is
BEYOND A REASONABLE DOUBT: WHAT YOU KNOW vs WHAT YOU CAN PROVE
The meeting will be held at the Kefar Ganim Library, 44 Atzmaut Street. The meeting opens at 6:30.  At 7:00 Dani and Miri Gershuni will give a presentation about the Schifres Family and I am scheduled for 7:30.
Posted by IsraelP at 7:30 AM