Although there were two posts before the beginning of Shevat last year, it is that month when I actually decided to try to do this regularly. Once a week seemed like an enormous task, requiring more discipline than I can usually muster, but I have pretty much done it. I skipped a few holiday weeks, but this post is number fifty-two and we have entered Shevat once again.

Having covered most of the our own personal family yahrzeits last year, I don't really want to do them again, but in case anyone missed them or wants to revisit them, I'll try to link to them at the start of each month, as they come again this time around. There was my grandfather Raymond Gordon, a few of my wife's ancestors (including her father, her maternal grandfather, her paternal grandmother and others), my mother and my sister - all in Shevat.

Now back to our regularly scheduled programming. Most genealogy research includes all kinds of loose ends. People to whom you think might be related, people to whom you know are not related but have similar names, alternate spellings (or alternate identities) of people you know, etc etc. Or, for instance, these three New York graves.


These three are almost certainly women who married Pickholtz men late in life, but I have not been able to determine who those men were. There is one Pikholz in New York who had at least one wife late in life, maybe even two, but his grandchildren do not remember anything about her/them. I have made inquiry about the three women and in at least one case acquired a copy of the death certificate, but there is nothing to solve the puzzle. So I have these three women as loose ends, of no genealogical significance, but, although they belong in our database, I am not going to allocate resources for that. However, since other researchers will run across them and point them out to me from time to time, I should have a record of what I know.

A reverse example is the first wife of my wife's grandfather, Mendel Baum, whose yahrzeit is this week (7 Shevat). He left Hungary - or more properly, Slovakia - for London before WWI, a childless widower in his forties. The family thinks the first wife died in childbirth, but no one has any specifics.

Thanks to the database of the JewishGen Hungarian Special Interest Group, I found the family in the 1869 census, for Vidrany and I ordered the document from LDS in Salt Lake City. 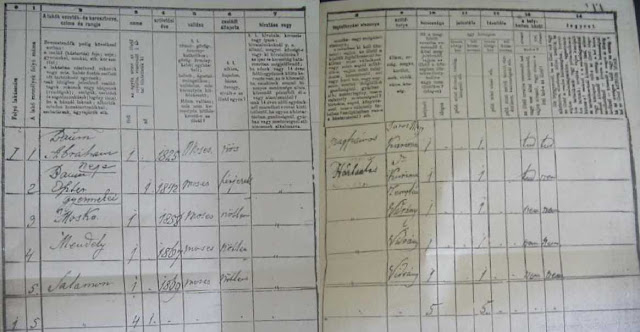 The census record shows two year old Mendel (line 4) with his parents (Abraham and Ester) and brothers. The three brothers were born in Vidrany (column 9) and the parents in Kurima. Inquiries in Kurima showed a number of Baum families, but it is not clear how they are related to one another.

So I figured that he had lived in Tarcal later, as an adult. A few years later, when the database expanded, we found his marriage record to the first wife, in Tarcal.
Reading from the left, we have the groom Emanuel Baum (as he was also known), son of Abraham Baum and Ester Baum. Then towards the center we see the bride Rebeka Weisz, the daughter of Israel Weisz and Fanni BAUM. Some kind of cousin, perhaps? I don't see her in Kurima, but the available records there are not comprehensive.

I have not made much effort to follow up Tarcal records. I have not gone into this deeply - there is always so much else to do. I don't see the death of Rebeka or anything about a child.

One thing for sure, this is not a loose end and this first wife must be considered in a study of the Baums of Kurima. 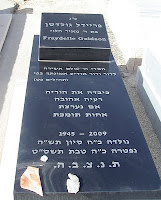 Oh, and while we are on the subject of Baums, last week was the fourth yahrzeit of Fraydelle Goldson, whose husband Jerry is a Baum descendant from the US - a second cousin of my wife. (His grandfather was born after the 1869 census, so does not appear there.) 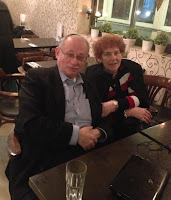 I participated in the graveside memorial and the following evening we went out to dinner with Jerry, his daughter Adina and Adina's daughter Zehava who is just after high school and is here studying not far from us. I expect we will see Zehava from time to time during the coming months.

My mother-in-law was also there - her first time meeting any of the descendants of her father's brother. She thinks that Jerry looks like her brother Uncle Shia. The nose is certainly the same.
Posted by IsraelP at 7:30 AM