A proper genealogy study includes all the records. OK, so my own work doesn't qualify. I do not have birth records for my brother or my sisters. Or my parents. Or my cousins, nieces, nephews, aunts and uncles. Or even my grandchildren - except one.

So you could say I am sloppy. Or cheap. But at least in those cases, I know all the dates and other relevant facts.

In the case of the European records from the 1800s for the Pikholz Project, it is largely a matter of money. We have over four thousand people and when you have couples with seven or eight births in Galicia, it makes sense to order one or two birth records per family and rely on JRI-Poland index listings for the others, especially the stillborns and the deaths of young children.

That is good enough for basic documentation on a limited budget. If all you have are years for births, deaths and marriages, sometimes you have to settle. You can put together a nice piece of work without specific dates of birth and death. The post-1876 Galician births have the names of the mother's parents, but once you have that for one or two births, that's covered. Sure, there are house numbers and causes of death, notes and other miscellaneous information, but you can live without these if necessary. There is also the possibility that there was a transcription error in the index, but those are rare.

On the other hand, as you raise the level of your work, you find that you can develop analytical tools based on some of that information that appears only in the actual records. For instance, some years back, I began recording events in our main towns - Skalat and Rozdol - by house numbers. I was not sure where that would take me, but it turned out to be a useful tool. 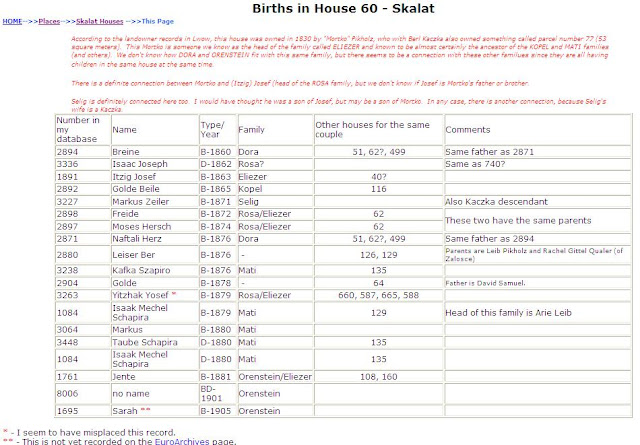 Sometimes this kind of thing can help determine relationships between families or at least hint at the family structure. Below is an example which nailed down a relationship which seemed clear based on naming patterns, but which needed one more piece of evidence. I had already determined that a particular couple named David and Serka Pikholz were almost certainly the parents of a certain Yitzhak Pikholz.

We can see that David and Serka died in house #145 during the years that this Yitzhak and his wife Frimet were having children in that same house.

Not only would I have been less likely to reach my conclusion if I only had one or two births of Yitzhak and Frimet's children - without the full set of birth records, I probably wouldn't have attempted an analysis based on house numbers!

Another example is the family of Peretz and Perl Pikholz of Skalat. They were named in the birth records of the grandchildren that they had from their four daughters - Chaje Nesie Spacierer, Basie Ruchel Scharf, Sure Kornberg and Blime Brandes. Below you can see parts of some of the births which were recorded in Skalat, Zbarazh and Tarnopol.﻿

So we see that these four mothers are the daughters of Peretz and Perl Pikholz. As usual, I ordered a couple of births to each family and aside from those, the only document we have referring to the parents is the death record for Peretz. Therefore, we have no idea if the Pikholz here is Peretz or Perl. (As we know, when the marriage was not recorded with the civil authorities, the children were given the mother's surname and the father often adopted it as well.)

When the Lwow records became available, I saw in the JRI-Poland index that while six of Blime's seven children were born in Tarnopol, one - the fifth - was born in Lwow. It struck me as curious that the family had four children in Tarnopol, then one in Lwow and two more in Tarnopol, so I ordered the record, just to see what would turn up. 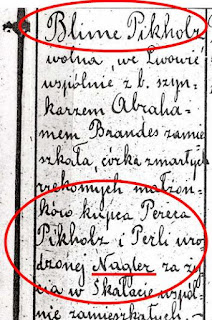 This does not tell us why they were in Lwow - though it does indicate that they were living there, not just visiting - but it does clarify that Peretz is the Pikholz and that Perl's surname is Nagler.

This is the only record that we have on the surnames, including Perl's death record which became available only recently. The name Nagler is, of course, unknown to the living descendants - even to those who know the name Pikholz.

So we know there is value in getting all the records - the issue is the budget.

More on this in two weeks - but with examples from records from the United States.