WHO IS THIS LEA PICKHOLZ?

Lea Pickholz Keller of Drohobycz
After the Second World War, the allies set up an organization called the International Tracing Service (ITS) with headquarters in Bad Arolsen Germany, to deal with all documentation regarding civilians during and after the war. This included deportations, camp records, refugees, people looking for other people, slave labor, etc. Over the years, ITS did lookups for people but did not make records or indecies available for general research, aside from some microfilms which have been available at Yad Vashem since the 1950s. 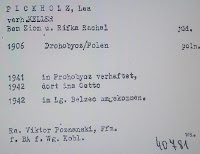 Attitudes began changing a few years ago and in early 2008, a much larger index was made available to the public at Yad Vashem. My first search of the new index showed files of a number of Pikholz descendants whose names I had not known before, among them Lea Pickholz Keller of Drohobycz. She was born in 1906 to Ben Zion and Rifka Rachel, but it was not clear which of her parents was the Pickholz. Lea was killed in Belzec in 1942.

I requested the file from Arolsen and learned that Lea's husband Pinchas had had some post-war correspondence wth the ITS from his Tel-Aviv address. I found two Pinchas Keller buried in Greater Tel-Aviv cemeteries, both of whom were age-appropriate for Lea and both of whom had died within the past fifteen years. I located the son of the right one.

The son was very surprised to receive my letter. He knew that his father had lost a family in Drohobycz, but didn't know any details.  He certainly didn't know anything about the first wife's lineage. But I did learn about the two children that Pinchas and Lea had together and who were killed. A son Shlomo and a daughter Rachel. I found an ITS card at Yad Vashem for Shlomo, but none for Rachel. Shlomo too had been killed in Belzec.

So this is where I was left, with a Lea Pickholz born 1906 in Drohobycz, to Ben Zion and Rifka Rachel. Another unidentified Pikholz descendant, at a time in my research when I'd have thought I'd be solving these questions, not finding new ones.

Identification
Birth, death and marriage records from east Galicia are held in the AGAD archives in Warsaw, but they may not be released from the Civil Records Office to the archives until the last record in the set is a hundred years old. Even then, we cannot order these records until they have been processed, fumigated, microfilmed and indexed. And there are no plans at the moment for additional indexing. AGAD's staff will not do searches, even if there is a precise date, which I didn't have in Lea's case. So the transfer in 2010 of Drohobycz birth records for 1906-09 was not much help.

In the course of some other inquiries, I found a man - I think he is a former AGAD employee - who is able to do searches in the newly transfered records based on surnames, and provide extracts of the records. He charges by the hour but can do several surnames at once. I got a quote from him for a number of record sets and contacted a few other researchers for each town, to spread the costs. (By the time of this writing, I have done this with three groups of record sets.) The extracts came quickly, but since there were dozens from the main Pikholz towns Rozdol and Skalat, Drohbycz took a back seat. (I had not done this project specifically to find Lea's birth.)

The five record sets I had ordered provided extracts of four births from Drohobycz, three from neighboring Boryslaw, thirty from Rozdol and thirteen from Skalat, as well as thirteen Skalat deaths. Lea was born to Ryfka Ruchel Pikholz and Benzion Flam/Kornhaus(l)er (it is not clear which surname comes from Benzion's mother and which came from his father) on 16 August 1909 in Boryslaw. That's 1909, not 1906 and Boryslaw, not Drohobycz. The record further tells us that Ryfka Ruchel's parents are Dawid Samuel and Sara Pikholz, a couple we know well.

We certainly know this couple. Dawid Samuel Pikholz was born in Rozdol in about 1838 to Aron and Chaje Pikholz. Aron was born about 1818 to the original Pikholz couple in Rozdol, Pinkas and Sara Rifka. Dawid Samuel and his wife Sara Thalenberg had four children that we knew of: Schaje, Chaja Lea (m. Samuel Glucksman), Abraham and Iszak. There are a few descendants of Schaja in the US and Canada, but they have no interest in contact. Chaja Lea and Abraham each had a number of children, but I have found no trace of anyone beyond their birth records. Iszak was known as Tallenberg and lived in Budapest and had three children. I am in touch with one of Iszak's two grandsons, who lives here in Jerusalem, and he was interested to hear of his mother's previously unknown first cousin.

I am pleased that Lea now has a place in the Pikholz tree.