To mark twenty years of the Pikholz Project - the goal of which is to identify and reconnect all Pikholz descendant wherever they are - let me revisit one of our first records. Because my older self has some things to say to my younger self.

Dawid Wolf and Rachel
Even before I met Ephraim Pickholz and Jacob Laor twenty years ago, they had ordered forty Pikholz birth records from the Lwow archives with the help of Alex Dunai. Those records covered the period 1829-1868. (Alex missed one more that I found later.)

Two of those records appeared to be the same couple, Dawid Wolf Pikholz and his wife Rachel. Their son Josef was born 3 January 1862 in house 222 and Meilech was born 16 December 1864 in house 65. Dawid Wolf's name appears in full on Josef's birth record but on Meilech's he is called "Wolf." There are no other births to this couple through the end of that set.

Much later we learned that Josef had nine children with his wife Beile Gitel Grunwald. The first two married and had children; the eldest, Rachel, has living descendants. The middle five died in childhood and for the last two we have only birth records (1897 and 1899). Josef died at the end of Passover in 1930, still in Rozdol. All we have for Meilech is his birth record.

We do not know when Rachel died, perhaps due to the absence of Rozdol death records before 1877. As Josef's eldest daughter was born in 1883 and carried the name of his mother, it appeared that Dawid Wolf's wife Rachel died sometime between 1864 and 1883, likely earlier than later.

And perhaps more important, we had nothing to indicate Dawid Wolf's parents, though we were only at the beginning of our research and had yet to understand the structure of the Pikholz family that lived in Rozdol.

Dawid Wolf and Feige Leah
Not long after that, Jacob Laor and I began our own project to acquire Pikholz records from the AGAD archives in Warsaw, particularly those from Rozdol and Skalat. Here we find five Rozdol

birth records with the father (Dawid) Wolf Pikholz and the mother Feige (Lea) Dorf or Friedman. The third and fourth died before the age of two. The birth years are from 1874 to 1883. The birth records before 1877 include less information than the later ones.

(The last of these births appears in the JRI-Poland index with the additional surname "Septimus" but I see no basis for this and I assume it is an error. I was not able to find anything that clarifies whether Feige Lea's surname is Dorf or Friedman - probably one is her father and the other her mother.)

Keep in mind that the first of these findings were nearly twenty years ago, well before I began speaking (preaching, even) about not recording conclusions that were not solidified. I made two assumptions - one that the two Dawid Wolfs are the same person with two marriages. The other was that Dawid Wolf - born probably 1840 or so, based the age of his son Josef who was born in 1862 - is the son of Moshe Pikholz and his wife Sara Steg.

Dawid Wolf's parents
Frankly I do not recall why I recorded Dawid Wolf as the son of Moshe and Sara. I may have noted that someplace. One of their descendants, Dina Ostrower, told me that they had ten children who reached adulthood and with Dawid Wolf, I had those accounted for. I have approximate birth years for some of those ten based on their death records - Fischel 1842, Gittel 1847, Josef and Perla 1854. I have recorded Dawid Wolf as the eldest.

But in my defense, I did not have all those dates when I recorded Dawid Wolf's parents as Moshe. And I had not yet formulated my policy of not recording what I was not sure of. I had not yet realized that once I record something, I will not revisit it unless forced to and my research heirs will likely never review it at all. This policy is the essence of my presentation "BEYOND A REASONABLE DOUBT - WHAT WE KNOW vs. WHAT WE CAN PROVE" which I will presenting in a few weeks in Rishon LeZion.

In the most recent batch of Rozdol records, the matter became settled. 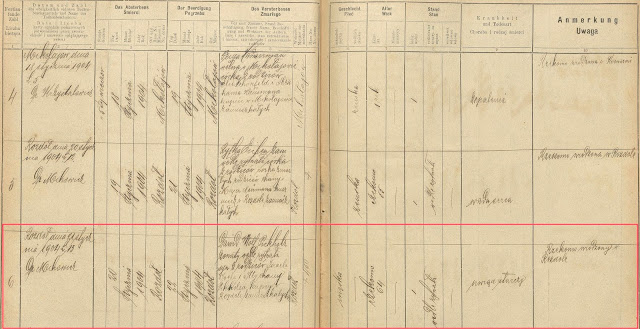 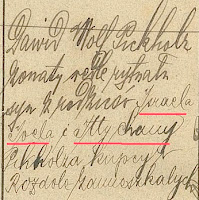 Dawid Wolf Pikholz died on 20 January 1904 at age 64, so was probably born in 1839. His parents are clearly identified, not as Moshe and Sara but Israel Yoel and Jutte Chana, his supposed grandparents. He was not his parents' eldest but probably his parents' second youngest, followed by Juda Gershon (1842) who became the longtime rav of Lysiec. In truth, it makes much more sense. It moves his Chicago and Israeli descendants up one generation.

This leaves me two tasks. One is to make revisions to the Pikholz Project website. We'll see when I get to that. The other is Dina Ostrower's testimony that Moshe and Sara had ten children. Now I have only nine and I shall have to consider whether one of the unconnected Rozdol families fits in as the tenth. 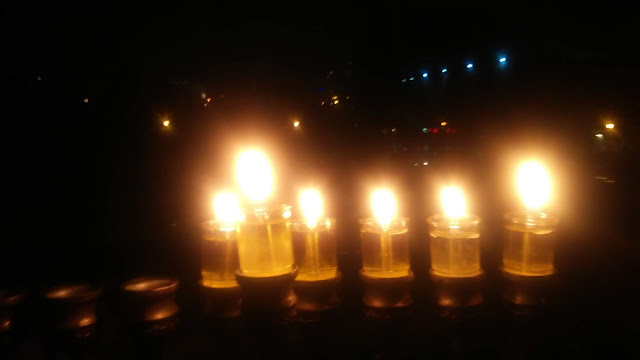