My "toe in the water" moment for DNA was a Y-37 test over seven years ago, but it was a year later that I became serious and ordered a Family Finder and I really don't do much on the Y side. That is mostly done by Rachel Unkefer, whose team is working on the line in which I am a subject.

Nonetheless, my first big success was after another Pikholz descendant from my g-g-gm's town of Skalat tested at my request and our Y-37's matched. His g-g-g-gf Mordecai Pikholz was born about 1805 and my g-g-gf Izaf Fischel Pikholz was probably a bit younger. I am fairly sure that they are brothers.

A third Pikholz descendant from Skalat tested as well. He goes back to Nachman Pikholz, born about 1795. I tend to think that Nachman is a cousin or an uncle of the other two, but I really don't know. What I do know is that all three of us have upgraded to Y-67 and our matches are perfect.


Two years ago at the IAJGS Conference in Seattle, a colleague Madeleine Isenberg Ellen Zyroff told me that her mehutan fits this group as well. His ancestral surname is Spira and they came from Sub-Carpathian Hungary, later Czechoslovakia.

I had previously discussed the possibility that the Pikholz family might have lived in Sub-Carpathian Hungary before arriving in Galicia, so this made sense to me, though I have no actual evidence. Then following the Seattle Conference, I wrote a blog post on the subject, including the following:

The Friday before I left for the US, I received a note from Dr. Jeffrey Paull, who does work on rabbinic Y-DNA lines, that another Spira had tested with results that matched ours perfectly on 37 markers. (Our tests are 67 markers.) This new Spira, who had tested at Jeff's request, claims descendancy from the Megalleh Amukot, Rabbi Natan Neta Spira who was born in Cracow in 1583 and claimed a Sephardic heritage. The paper trail for this man is being verified.

I refer to this second Spira at "the Z-man."

Since then, a third Spira has appeared at a genetic distance of 1, as has a Weinstein descendant. The latter has not replied to my several attempts at contact. He is a "2" to the third Spira, so their mutations are different.

There is also someone with a genetic difference of 2 from us, from that same area. He too has done SNPs and is in haplogroup R-A9700.

Jeff Paull is still working on the Z-man's putative connection to the Megalleh Amukot, whose "known" male line descendants include Rav Pinchas of Korets (1728-1790). But what appears clear, almost beyond a doubt, is that before we were Pikholz, we were Spira. And not so far back either. Now, when we have a Pikholz-side match with someone new, I include Spira as a surname of possible interest.

The Megalleh Amukot angle intrigues me. He was a kabbbalist and the Encyclopedia Judaica says he was

"intoxicated" with numbers; he was concerned less with using the qualities of numbers in order to elucidate matters of Kabbalah and halakha than in employing the Kabbalah as material for showing his great power with different numerical combinations, and there is no doubt that he had an extraordinary mathematical mind. 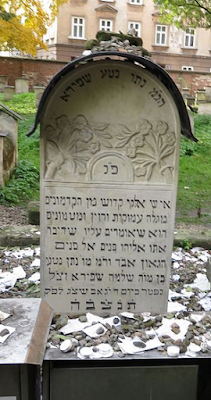 Well, having a great affection for numbers myself, I am willing to accept him as a male-line ancestor, with open arms. Not to mention that I already have a grandson named Neta.

My son's Hassidic rabbi in Chicago says that it is appropriate to mention such an illustrious ancestor on my tombstone. (Note to self...)

Today, the thirteenth of Av is the yahrzeit of the Megalleh Amukot, Rav Natan Neta Spira. Three hundred eighty-five years ago. He is buried in Cracow.

The stone says that it was said of him that the prophet Eliyahu spoke with him face to face.

They say that he wrote two hundred fifty-two commentaries on the word "Vaethanan," which is this week's Torah reading.

I bought his two-volume book on the Torah and don't understand a word of it.


Housekeeping notes
Family Tree DNA sent me a notice last night offering to upgrade me to Y-111 for only $29 and I have taken them up on it.
Posted by IsraelP at 5:15 PM