My mother's mother, Sarah Rosenbloom Gordon, went to the US from Borisov before WWI - as did her two younger sisters and her younger brother. The two sisters were dead by early 1916. An older sister stayed in Russia with her husband and children. There was also a younger half-brother and half-sister who remained in Russia with the father and step-mother. The half-brother was killed in a pogrom of some sort after WWI.

Less than seven moths ago, I reported here that we (=Galit Aviv-Sisto) had found the grandchildren of the older sister Alta Rosenbloom Kaplan. Grandsons in Indiana and New Jersey, a granddaughter in Columbus Ohio, a granddaughter in Nuremberg, a grandson who died here in Israel (I am still looking for his three children) and at least two living granddaughters in Moscow.

The IAJGS Conference in Orlando was three weeks ago (seems more like three months!) and Aeroflot has a nice price from Israel to the US east coast (< $1050), so I booked my flight and arranged to visit one of the Moscow cousins - my second cousin Liya, her husband Gennady and their daughter Katya who has been my Facebook translator these past months. The other, older cousin was not well and her daughter who would have accompanied us, was out of town. 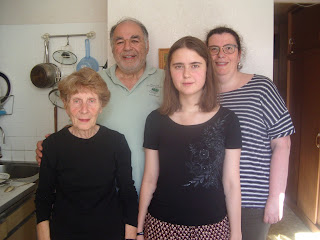 Katya met me at the airport Tuesday evening. Moscow is a huge city, very sprawling - at least that was my impression - and it took about an hour to get to their apartment. The weather was much warmer than I expected. Liya is a retired mathematician, as was her father (my mother's first cousin) and his younger sister. Gennady is a retired professor of electrical engineering.

They have a son, Ilya, who lives in UK but as his daughter Tatiana was already in high school when they went, she stayed behind to finish her schooling in Moscow. Tatiana (twenty-one) is studying mathematics. When I told her I was going to Orlando and identified it with Disney World, she said that all she knows about the US is where people study mathematics. These mathematicians tend to be focused.

Wednesday, we went to the cemeteries, Gennady driving, Liya with her gardening tools, Katya and I. Our Kaplans are all buried in the Vostrikovsky Cemetery. In the best Soviet tradition, it is non-sectarian and perhaps that is the reason it is in such good condition. There is no Hebrew on the tombstones, nor are there any Jewish symbols. Not even the small stones that visitors leave in many countries. Each grave or pair of graves is surrounded by a metal fence.

My great aunt Alta is here as are all of her children. It is not clear where her husband is buried or even when he died, in the early 1920s. Apparently he was never discussed. Uncle Hymen said his name was Berl, but his children are Borisovitch and Borisovna. You will see the problem with that further on.

Most of our Kaplan graves are in section 94. 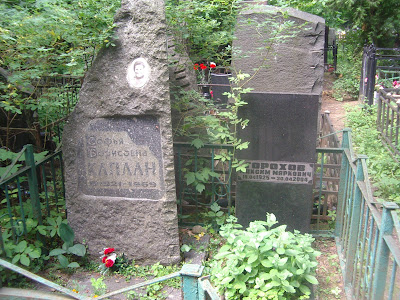 Next to the road is the grave of Sophia (Sonia) Borisovna Kaplan, born 1921, died 1969. I do not have precise dates. She was a mathematician and died of breast cancer.

Her son David (who is almost certainly named for our great-grandfather, as am I) is the one who came to Israel. Next to her is her husband Maksim Markovitch Gorohov, born 18 April 1925, died 30 April 2004.

Maksim's surname was originally Razgon but was "sovietized" to Gorohov. David reverted to Razgon in Israel. 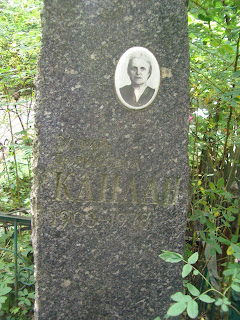 This is the view from the side of Sonia's tombstone.  Sonia shares the grave with her older sister Esfir Borisovna Kaplan, 1903-1978.

Esfir - which I am told is the Russian form of Esther - was named Etta Bryna after her maternal grandmother who died in Borisov in 1896, probably before her fortieth birthday. Etta Bryna's surname is unknown and I have written abut this several times, most recently here.

Esfir's husband was Yosef Gemeyner. She was not able to have children but she raised her husband's son Mark from his previous marriage.

Alta, my grandmother Sarah and Uncle Hymen all had daughters named Etta Bryna for their mother and all three of those daughters adopted after not being able to have children. (My Aunt Ethel had two natural children after adopting.) 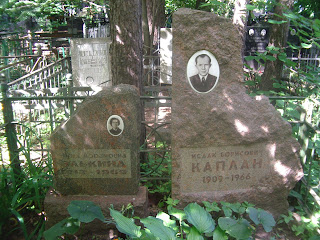 A bit further back from the road, without moving the car, are Liya's parents.

Liya, their only child, ws born in 1939, so she was orphaned of both parents by age thirty. Alta was still alive when her youngest children, Isaak and Sonia, died.

The picture of Isaak on the tombstone - a Russian custom which is practiced in Israel as well - I have never gotten used to it! - is certainly familiar. 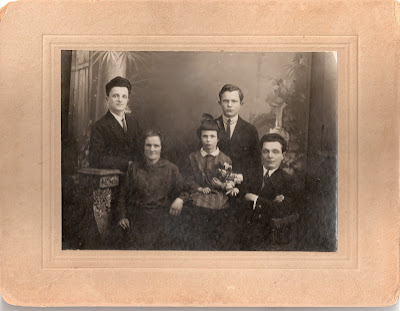 This is the same Isaak, standing on the right. This was the only Kaplan photograph we had until seven months ago, so we thought there were only four children, not six. (The girl is Sonia.)


Below, we see the Kaplan family in 1914, just before Uncle Hymen (standing in the back) sailed to the US on the last ship before WWI. Isaak is the young boy seated on the left. The daughter on the table died and I do not know her name. Esfir is the girl on the right. 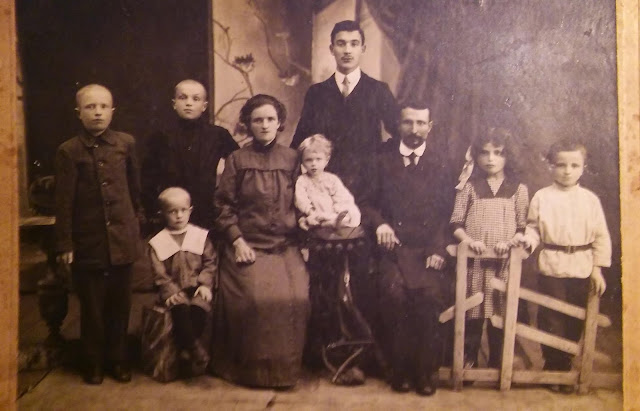 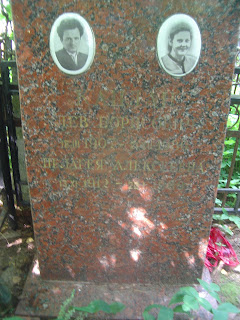 I assume Lev was named for Etta Bryna's father Yehudah. We have no idea when or where he died, but there is a good chance it was after Etta Bryna.

They had three children - one now in new Jersey, one in Columbus and the youngest who died in Moscow ten years ago.


As we visited each set of graves, Liya brought out her gardening tools and went over each one. The clippings were carefully removed. 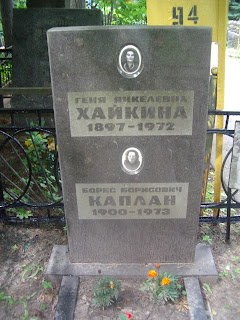 We moved along the road to the corner of the section where we found the grave of Boris Borisovitch Kaplan, 1900-1973. This is where we defer to Uncle Hymen's memory of Alta's husband as Berl, as there is no way Boris would have been given the same name as his father. In fact, Uncle Hymen said that this son, Boris, was named Boruch Yosef.

The fence was freshly painted. Perhaps at the direction of their daughter Dusya. Or Dusya's daughter. Dusya was born in 1929 and is one of the two great-granddaughters mentioned by my great-grandfather Israel David Rosenbloom in a 1929 letter to Uncle Hymen. No one is certain if Dusya is alive as the families are not in contact.

We crossed the main road to the other side of the same cemetery heading for section 116. On the way we encountered an entourage of large men in suits, sunglasses and Mercedes looking for all the world like your stereotypical Russian mafia, straight out of central casting. We carefully found a way around them. 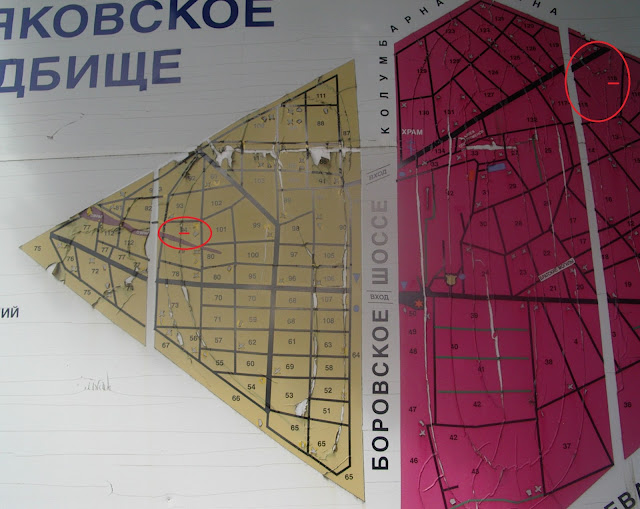 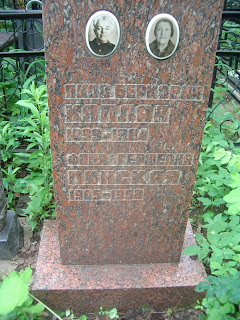 The eldest son Yakov, named for Israel David's father, is in section 116. Yakov was a shoemaker which enabled him and all the family to live in Moscow. This is what saved them during the Holocaust.

Yaakov is not called Borisovitch, but Berkovitch which fits better with Berl as Alta's husband's first name. My mother's first cousin, Yakov Berkovitch Kaplan was born 1899 and died 1984.

His wife Fanya Gershevna Pinskaya is buried in the same grave. She was born 1905 and died 1988. The Soviet regime did not acknowledge marriages at that time and their children have Fanya's Pinsky name.

Fanya was from Penza, where Israel David lived after WWI, and I assume that is how Yakov and Fanya met. Inna in Nuremberg is their daughter.

Within the boundaries of the same fence is Alta. 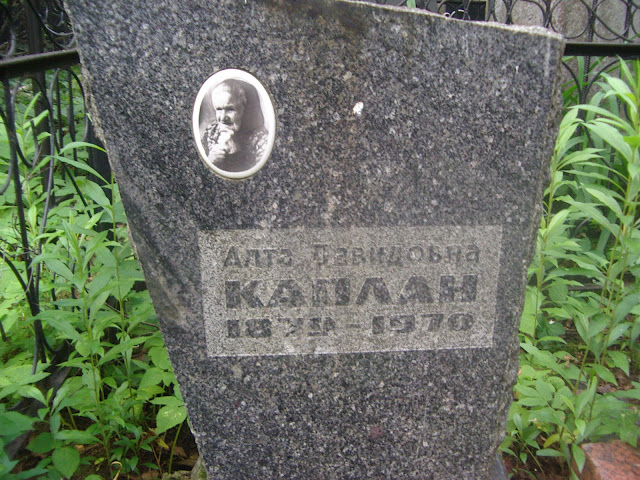 Alta Davidovna (from Israel David) Kaplan, 1879-1970. The family tradition was that she lived to ninety-three, so the stone may be incorrect. Or the tradition.

The family says that the name "Alta" was added during a childhood illness and that her original name may have been Masha - but no one is sure.

There are about six years between Alta and my grandmother Sarah, the second child. That fits with the story that Uncle Hymen was called CHAIM Benzion because several sons died in infancy. Very likely they were born between Alta and Sarah. (Attention family members - Benzion and Masha are probably family names. Chaim and Alta are not.)

Finally - on this day which was beautiful for visiting cemeteries but miserably hot for sitting in traffic - we drove to the Malakhovskoye Cemetery to see Aunt Mera, the half sister with whom Uncle Hymen was particularly close. 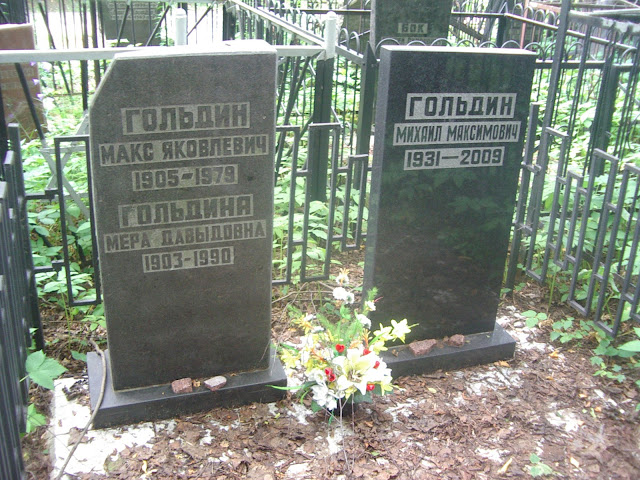 The stone on the left is Maks Yakovlevitch Goldin 1905-1978 and Mera Davidovna Goldina 1903-1990. My grandmother, who died in 1959 in her seventies, had a living sister as recently as twenty-seven years ago. Aunt Mera was a physician and the cemetery records say she was from Penza.

I do not know if here is any symbolism associated with the cut corner on the top left of the tombstone.

This is a Jewish section, rather than standard Soviet, and people leave stones. The flowers are plastic, so could have been there for years.

The grave on the right is Mikhail Maksimovitch Goldin 1931-2009. Aunt Mera's son. The blank space below his name looks like it should be for his wife, so she may well be alive. Maybe children too.

At four in the morning, it's already light that time of year in Moscow. Gennady and Katya drove me to the airport at five thirty Thursday morning for my 9:25 flight to Dulles. There were eight chairs at the gate.

The only people I saw during my Baltimore-area overnight were Uncle Bob and Ro and Friday I was off to Orlando.
Posted by IsraelP at 12:46 PM