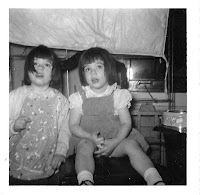 My nephew Eliezer's Family Finder results just came in. That's one of the sons of my sister Judith. Her twin - my sister Carol/Devorah - was killed in an auto accident thirty years ago, but since they are identical, we have her DNA. Except for the astigmatism and later the glasses, you could not tell them apart.

But Judith wanted to know what the DNA would say about their children so we ordered Family Finder tests for Eliezer and for one of Carol/Devorah's sons Avi. Avi's results came in a couple of weeks ago and I discussed them here. 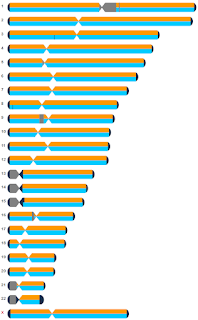 This is the chromosome browser for Judith showing the two boys. There is no difference between the orange and the blue and you cannot tell which is her son and whch is her nephew.

Family Tree DNA says each of the boys shares 3382 centiMorgans with Judith, with a longest segment of 267 cM.

There is, however, one number worth noting. Avi and Eliezer share 1963 cM, based on the FTDNA match page. On GEDmatch, it's even greater, with 2177cM at the standard threshhold of 7 cM, 2223 cM with a threshhold of 1 cM.

The International Society of Genetic Genealogy Wiki says that half siblings share about 1700 cM, so our numbers appear high. Blaine Bettinger's Shared cM Project brings actual statistics showing that half siblings share anywhere from 1320 to 2134 cM with an average of 1753 cM. (His statistics show full siblings to be 2150-3070 cM with an average of about 2600 cM.) He calls the range 2100-2230 cM the "caution area," where you cannot determine the relationship from DNA alone - maybe half siblings, maybe full siblings.

It is tempting to say that the extra-large overall match between Eliezer and Avi may have something to do with the fact that their fathers' families come from the same general area - and both are kohanim, to boot - but no one has an interest in actually checking this out. I showed some of these numbers to Blaine and asked if it is reasonable to say that "there is a good chance their fathers are related" or perhaps "a very good chance." He allowed for the possibility that the fathers are related but "probably not closely." I can go with that.
Posted by IsraelP at 10:36 AM