The Large DNA Matches of My Great-Grandfather

I have written about GEDmatch's Lazarus tool before - most notably here, here and here. (I had quite forgotten about the last of those three and very much enjoyed rediscovering it this week.)

I have also spoken about Lazarus in a talk I gave at the IAJGS Conference in Seattle, "GEDmatch's Lazarus Tool As It Applies to Two Kinds of Endogamy." (I would be happy to give that talk during my coming US trip - see below for available dates.) For that talk, I created a Lazarus kit for my great-grandfather Hersch Pikholz and that kit is the subject of the first of the three links above.

I used that kit to see what I could learn about his relationships with other Pikholz descendants. In one case, it was a big help; in others it was just one more bit of vague, ambiguous evidence.

Now I am ready for the next step. Who else is related to the partial genome which is the Lazarus kit of my great-grandfather Hersch Pikholz?

For that I turned to another of the GEDmatch Tier 1 tools -  the Matching Segment Search. This shows all the matching segments of a given kit, in a very convenient, visual format. 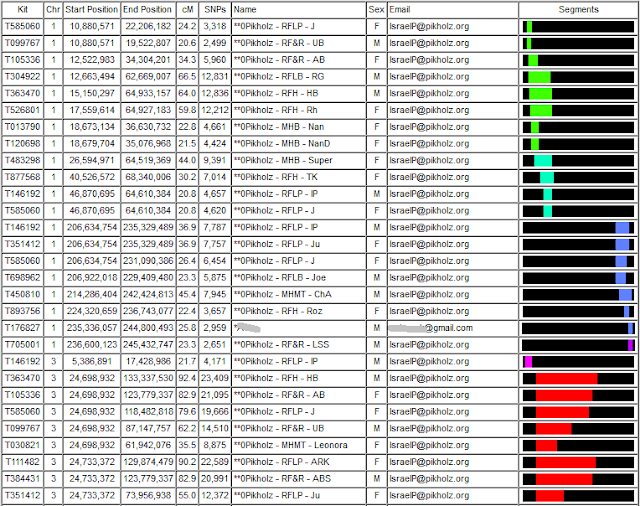 The default for the search is 7 cM, but in order to make it more manageable, I set the threshold at 20 cM. I figured it was likely that the smaller matches would not lead anywhere. Remember, both of Hersch's parents are Pikholz and we have no other surnames in his ancestry. In the results above, 28 of 29 listed matches are known family members of my great grandfather. I have no idea who the other one is - but of course that is the purpose of this exercise.

The Matching Segment Search produced 230 results of 20 cM or more, 179 of which are our own. The remaining fifty one are on twelve segments but the majority of those appear to be "pile up regions."

None of the fifty one segments are as long as 30 cM.. With one exception, all the chromosomes with multiple matches come on the same segment.

There are a few matches where we have no corresponding Pikholz matches - matches that would have been necessary to create the Lazarus kit. I suspect that these are not real segments, at least not that big, but are compounded from smaller segments. Nonetheless, I am following them up.

So far, I have written to twenty-six of these new matches - most of whom are not people I know. We'll see what comes of that. Eight have responded so far. The very first knocked my socks off by saying that her mother was from Berehove, a city in Sub-Carpathian Ukraine where one of my close Y-DNA matches comes from. There is some serious potential here regarding where we were before Galicia.. I hope that before long Lara Diamond will be organizing record acquisition from Berehove.

Another match for my great-grandfather's Lazarus kit has Beinenson ancestors from my maternal grandmother's home town of Borisov (Belarus) and he will be joining our project there.

Actually several of the responding matches have ancestry from Belarus, which is not an area we generally associate with the Pikholz family.

Anyone who cares to do a one-to-one with my great-grandfather is welcome to do so, using his kit LL557686.

Housekeeping notes
I have added a stop at the JGS of Los Angeles to my winter itinerary. See details below. (I did my basic DNA presentation for them fifteen months ago.)

Program chairs - and people who know program chairs - please note. I have some open dates for my US trip in the winter, including Sunday 12 February in the west. Weekdays are available between 23 January and 2 February, in the east and midwest. Several topics are available including the Lazarus-Endogamy talk which I presented in Seattle and a new one where DNA is not the main point of interest. 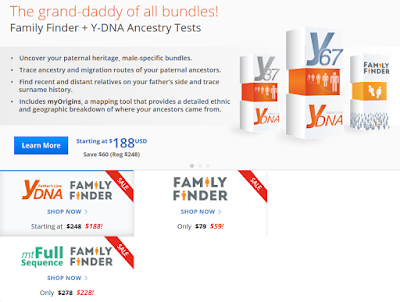 FTDNA's big sale is on, led by the $59 price for Family Finder. Also reduced prices for the Y and MtDNA tests, together with coupons. If you are a family member, talk to me.
Posted by IsraelP at 3:06 AM