Part Three
(Parts One and Two should be up in a few days.)

This chart appears in a different form in Chapter Twenty-Two of my book ENDOGAMY: One Family, One People. Some of the comments below appear there as well, but there is some additional detail.

I did a Big Y test a few months ago and several Y-SEQ tests as part of a Y project organized by Rachel Unkefer and that has resulted in my Y being redefined to R-FCG20748 instead of the simpler R-M269. This is not a subject I understand well and my summer plans include meeting with Rachel in order to get a better handle on what this is all about.

So let's take the column on the right from top to bottom.

1. Isak Fischel Pikholz at the top in bright yellow is a perfect Y-67 match to two other Pikholz descendants whose known ancestors were born about 1795 and 1805. The Most Recent Common Ancestor(s) must be at least a generation before that.

There is one other person with a perfect match but his Family Finder is not a match to us, so the connection is obviously further back.

2. Rivka Feige Pikholz in light orange. Joe and Lillian have perfect matches with ninety-two other people, but we have not been able to do anything with that. Some have not done Family Finder tests, some provide no information, some don't respond and for some - despite all the good will and effort - we don't know enough on either side.

Rivka Feige's father is Isak Josef Pikholz whose yahrzeit is either today (Tuesday) or tomorrow depending on whether he died before or after sunset.
There is no doubt in my mind that Isak Josef has the same Y as the rest of us, but none of his three known sons have male lines to the present, so we cannot verify this.

When I wrote about Rivka Feige's haplogroup in the book, Lillian had not yet tested. She did so last summer and died six months later. Lillian's test has been critical for our project and this reinforces once again the urgency to test everyone you can as soon as you can. No one lives forever.

3. Mordecai Meir Kwoczka of Zalosce, son of Jutte Leah and Jossel. Bruce did a Y-37 test and has twelve matches that are one step away. One of the twelve is as close as a third-fifth cousin according to Family Finder. For our purposes, the Kwoczka family begins in Zalosce in the mid-1790s and for the time being it will stay that way.


4. Basie Pollak of Jezierna, daughter of Shimshon and Chaia Sara. Herb has no perfect matches, but has about thirty matches one mutation away who are all perfect with one another. That one mutation is in an area called the Coding Regions. The mutation itself is known as C6925Y. This showed me that our line had mutated away from theirs, perhaps within the last couple of hundred years. That made them worth following up. Unfortunately nothing has come of that so far. There is another second cousin I'd like to test, to see perhaps if the mutation Herb carries is as recent as his mother.

5. Ignatz Rosenzweig from Trencin County Slovakia. My grandmother had three brothers, but two had no children and the third has only granddaughters. My great-grandfather had three brothers, but we know of no male-line descendants among the survivors. We have no one to test. A newfound fifth cousin once removed who works across the walk from where I live has an all-male line to his grandfather, but that's as close as he gets.

6. Miriam (Mali) Zelinka from Trencin County Slovakia, daughter of Isaak and Sari. Here too we have no test candidates.

7. Shemaya Bauer of Kunszentmiklos Hungary. I have written about the Bauers a few times, including here. My father's second cousin Shabtai tested and has four matches one mutation away and twenty-two two mutations away. We know that the Bauer name goes back at least until the early 1800s and there are quite a few Bauers in Kunszentmiklos (Hungary) where my great-grandmother was born and in Apostag where the Bauers had lived previously.

None of Shabtai's matches have the surname Bauer. This would be almost unthinkable in western, non-Jewish populations, where surnames went back much longer and were more stable.

8. Feige (Fani) Stern of Kalocsa Hungary. I wrote about this family several times, including here. Aunt Betty did this test and found only eleven matches total, only three with zero mutations. All three did Family Finders and none matched. There is nothing remotely familiar in the geography of their ancestors.

9. Mordecai Gordon of Lithuania (Vileika/Myadel), son of Rachmiel and Diska. Leonard has five matches, two from a single family, with zero mutations and ten more one mutation away. Here too, none of them are Gordon. (Our Gordons go back into the early 1700s, according to two distantly-related researchers.)  One of the zero matches is with a Kapelowitsch family and we suspect a connection between a family of that name and our Rosenblooms, who lived not far from the Gordons. That suspicion appears to be supported by autosomal DNA.

The haplogroup for Leonard, Baruch and Shabtai is E-L117, despite the fact that the Gordons are from today's Belarus, the Kwoczkas are from east Galicia and the Bauers are from Hungary. If we look at the thirty-seven markers, the three families share twenty-one of them. The two that are closest genetically are the Bauers and the Gordons.

10. Basya. We know nothing of this woman and her family. My mother carries her name as does the mother of Ruth who tested for #12.

11. Gershon Kugel of Pleshchenitsy. He had at least two sons, but we know nothing of them, so have no one to test.

12. Zelda. My second cousin Ruth did this test and has thirteen perfect matches. One of these, my research colleague Adam Brown, has Kugel ancestors from the same place. But this test looks at Mrs. Kugel, not the Kugel surname. Adam and Ruth are suggested fourth-remote cousins, so there may be something there.

13. Yaakov Rosenbloom of Borisov Belarus. Sam's test has a grand total of three matches, none close.

14. Shayna Liba. We have no one to test as we do not know what siblings my great-grandfather Israel David may have had.

15. Yehudah, the Levi. That is all we know of my great-grandmother's father, mother or siblings.

16. unknown. My great grandmother Etta Bryna died in her late thirties and no one knows anything about her.  We have fifteen perfect matches here, but one stands out. That is a third-fifth cousin according to Family Finder and his great-grandmother is Yenta Bryna. But we don't know enough to take this obvious connection further.

Housekeeping notes
Next up, 13 April in Petah Tiqva at 7 PM, Yad Labanim. In Hebrew. 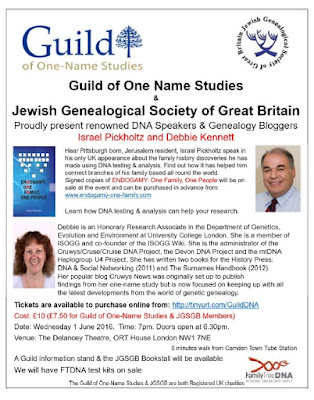 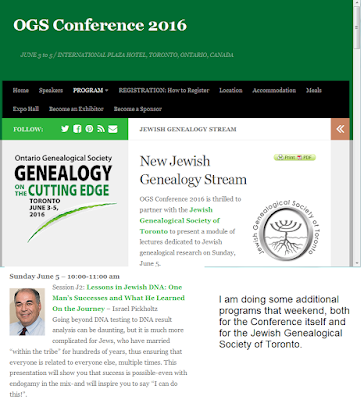 with more planned for the summer.