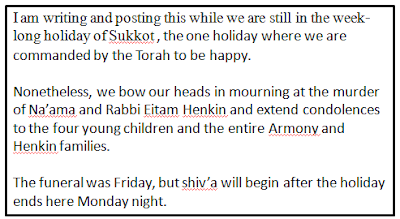 May G-d avenge their blood.
For some additional perspective, see here.

I received an email last week from a man named David Martino. He began as so many others do:


I am writing because I match with three of your kits on gedmatch: ...

I wanted to compare family names and see if we can find the connection.  I also have multiple kits on there.  I wonder if any of your kits connects with multiple of mine.  That could help us narrow down the connection.

Two of my sisters are his closest matches beyond a couple of known famiIy members.

I replied as I do to other inquiries of this sort, that I have some eighty kits and that proper analysis requires looking not only at the closest matches. And that you cannot analyze these matches in the aggregate, but it is necessary to look at the segments on individual chromosomes.

So David gets right to work and came back to me with GEDmatch results which included nearly congruent matches with my four sisters and me.

Amy and Jean match precisely. Sarajoy ends at the same point as they do. Judith and I also match perfectly, starting and ending slightly before the others. Normally, I would just look at that and say that this represents a single match with one of our parents that came down to us with some variation. The task would be to see how we share matching segments with David and our other family members. Are there relevant matches with my father's brother and sister? With our second cousins on the Pikholz side? With the first or second cousins on our mother's side?

Turns out it isn't so simple. First of all, David has only two additional chromosomes with matches of 20 or more cM (represented by yellow bars) or 10-20 cM (represented by green bars). There is a "yellow" match on chromosome 17 with only my sisters and a handful of "green" matches with two of my sisters and some other relatives on chromosome 22. I'll look at chromosome 22 separately, but for now the curiosity in chromosome 3. Our group of five are joined there by two other family members, both on our father's side but not known ro be related to one another.

Fred is the grandson of our grandmother's half sister. Our great-aunt is Fred's only grandparent with Jewish DNA. Our grandmothers' common ancestry is through their father who is a Rosenzweig from Trencin County in western Slovakia.

Ralph's great-great-grandmother is a Pikholz, the sister of our great-grandfather Hersch Pikholz, who is from Skalat in east Galicia.

My immediate reaction was that one of Fred and Ralph matches David together with us and the other matches David via his other parent.

The way to examine this further is by triangulation. Let's revisit the definition of triangulation, according to Kitty Cooper.


If I match A and B on the same segment why is that not enough to prove they match each other and we have a common ancestor?

The reason the ancestor is not proven is that you have two strands of DNA on each chromosome (remember there are 23 pairs of chromosomes) and the testing mechanism cannot differentiate between the two of them. So A could match the piece from your mother and B could match the piece from your father or one of them could even be a false match to a mix of alleles from both parents (see my post on IBC for more on that concept)

The way to prove the common ancestor is to see if A and B match each other in the same place that they match you. This is what we call triangulation. [Emphasis is Kitty's.]

So I triangulated everyone. Amy and Jean match Ralph and not Fred. Sarajoy, Judith and I match Fred and not Ralph. The five of us are not the group that they seem to be vis-a-vis David. I was surprised that Sarajoy is paired with Judith and me, not with Amy and Jean - her end point is the same as theirs not ours.

Just for fun, I ran the GEDmatch "Are your parents related?" function on all five of us. For four of us, the answer on chromosome 3 is negative. Here is the result for Sarajoy.

So somehow or other, Ralph, Amy and Jean match David via one of his parents, while Fred, Sarajoy, Judith and I match David via his other parent. But that cannot be right because it would require David's parents to match on that segment using the "Are your parents related?" tool. Which they do not. In fact, David's father has no known Jewish DNA.

David is in the process of convincing family members to test and as of now, he has test results from his maternal grandmother and the sister of his late maternal grandfather.

Here are his grandmother's matches on Chromosome 3:

Looks familiar, doesn't it! Down to the end point that Sarajoy shares with Amy and Jean.

The grandmother also comes up negative on the "Are your parents related?" tool.

Perhaps some of the experts have some ideas on all of this. I expect that some of them will explain that the start and end points are fuzzy and that some of these 10+ cM segments are likely Identical By State (or By Chance) and not "real" matches. This looks like a circular argument to me, but that's me.

In the meantime, David is doing some homework on Chromosome 22 and perhaps we can look at that next week.
Posted by IsraelP at 6:20 AM