The family
Fifteen years ago, back before JRI-Poland began working with the AGAD archives in Warsaw on east Galician records, Jacob Laor and I had our own project to collect records from from the Pikholz strongholds Rozdol and Skalat. One of the searches we ordered produced a three-page list of records and we ordered all of them.

Among the Skalat families we were able to reconstruct was Jakob Pikholz and his wife Henie Malka Ginsberg, the daughter of Abish and Lea Mariem. In time, we gathered what appears to be the whole set of births for this couple.

Two of those records are for the eldest daughter, Leie Mariem, one dated 22 September 1877 and the other dated 1 November 1877. When we saw the actual records, it turned out that the second was a death record dated 4 November

Third was a daughter Jente Rachel, born 1880. Seven years ago, we learned that she arrived in Jerusalem during WWII and died here in 1970. She has one granddaughter and I have met her several times. The granddaughters of Perec and Jente Rachel are the same age and both work in the legal profession.

Fourth was a daughter whom AGAD listed as Bassie, born 29 August 1882. The actual birth record calls her Bassie Rosa.

Fifth was a daughter whom AGAD called Roze, born 28 July 1884. The conflict between daughters named Roze and Bassie Rosa was obvious and we assumed that Bassie Rosa had died and the name Roze was recycled to the next daughter. Fifteen years ago, I was quite the greenhorn. 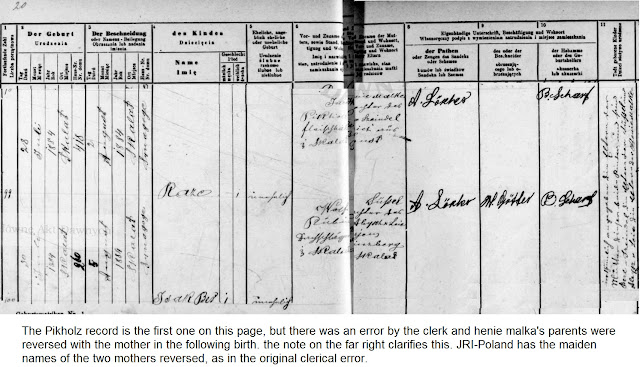 Seventh was a son Szyje Izak, born 30 September 1888. Shammai Segal told me that he knew a butcher by this name, but knew nothing about his family.

Rose in New York
In 1907, Rosa went to New York on the President Lincoln. She is clearly identified on the passenger list as Rosa Pickholz, age 22 from Skalat, daughter of Jakob Pickholz who lived in Skalat.

In 1912, she married Samuel Greenberg, a fellow Skalater. He spelled it Gruenberg in Skalat. The parents' names are correct and she gives her age as 26 instead of 28. 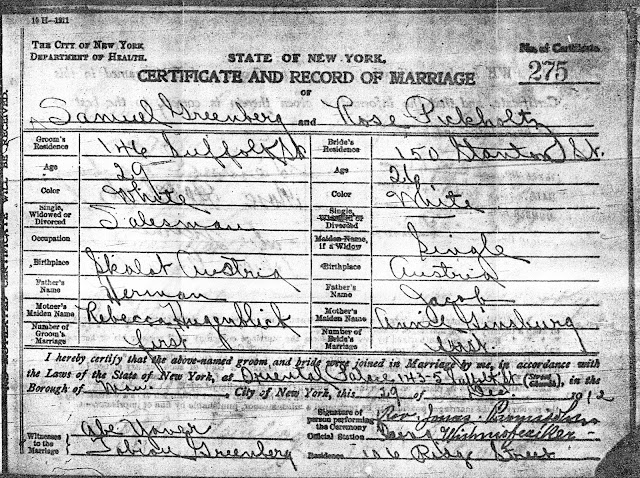 In the 1920 census, they are in the Bronx with a son Max, age four years and some illegible number of months. Rose is thirty-four years old and both she and Samuel are clearly identified as born in Skalat.

And there, dear readers, the story ended for me. I could not find any of the three anywhere, including in the Social Security Death Index. Neither of Rose's great-nieces had ever heard of her or of Max. I would look at records from time to time, but either I was not seeing them or they were not there. Sam, Rose and Max Greenberg are common names and that certainly didn't help. It's not like looking for Pikholz.

Martin
When I had another look at the 1930 census three months ago, I saw Max, age fifteen born in New York, with his widowed mother Rose, age forty-one born in Austria. They were living in Brooklyn.

I moved on to the 1940 census and found them, still in Brooklyn. Max is a twenty-five year old law clerk (the law runs in this family!) and has acquired the middle initial "M." 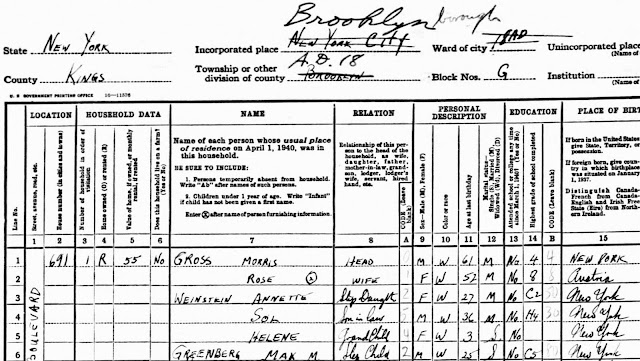 Rose is married to Morris Gross and his daughter, son-in-law and granddaughter are part of the household. Rose is fifty-two. I found the 1937 marriage record of Rose and Morris, which named her parents and thus nailed down Rose's identity.

I enlisted the help of Renee Steinig, who is way better at finding living people in the United States than I will ever be, and she found Morris Gross' granddaughter. The granddaughter did not know Max, but she did know of Martin. She had a name for his wife, who predeceased him by some fifteen years. There is - or was a second wife - before Martin M. Greenberg, the attorney, died in 1991. He had one daughter who died at fifty-six in Montgomery County Maryland. Her son is on Facebook, but has not yet responded to my attempts at contact.

Rose, who died in 1965, Martin and Martin's first wife are buried in adjacent graves in Montefiore Cemetery. Rose's age is seventy-seven. Samuel is elsewhere and I have not yet identified him among the 1920s New York deaths.

I acquired a copy of the probate file and it contains Martin's death certificate, excerpted below. The informant was the second wife. 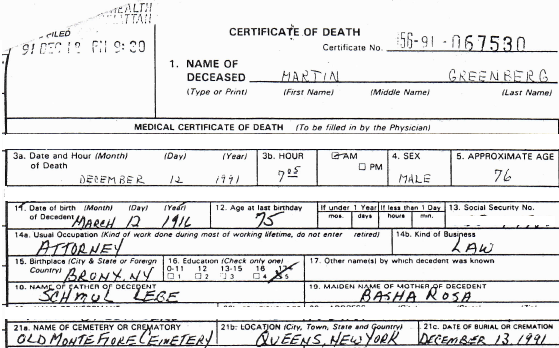 His mother is not Rosa. His mother is Basha Rosa. Bassie Rosa, the older sister born in 1882? But how can this be? If Bassie Rosa was alive, how was the next daughter called Roze?

Similar names
I went back to have a look at Roze's birth record, but rather than rummage through my printed records from fifteen years ago, I went through JRI-Poland. There I saw that the indexer in Warsaw had written "Raze," not "Roze" and that was, in fact a much better transcription of the original. Raze (pronounced "Rah-tze") is not a form of Rosa. It is a distinct Yiddish name. So in fact there is no conflict between the names of the two sisters, Bassie Rosa and Raze. I have no idea what became of Raze.

It is important to work with original documents whenever possible. Judy Russell, The Legal Genealogist, addressed this issue a few weeks ago, and not for the first time.
Of course, it helps  to know what you are talking about. Fifteen years ago, I did not know the name Raze, so looking at the original more carefully would not have prevented my error.

That brings me back to one of my favorite points. I am supposed to know what I am doing. Other members of the family assume that I do and are hardly likely to recheck my work. Heck, if not for Martin's death certificate, I wouldn't have rechecked it either!