Background
Early in our research on the Pikholz families, Jacob Laor obtained a copy of the marriage record of Berl and Dwojre Pikholz, with the help of Alex Dunai. The document was from 1887, but was obvously just a formality, as the couple had been having children together since at least the 1860s.

According to the marriage record, Berl was born in 1816 to Josef and Rojse Pikholz and Dwojre (or as we spell it today, Devorah) was born in 1837 to Motie (=Mordecai) and Taube Pikholz. Everyone was from Skalat.

Is the course of our subsequent research, we learned that Josef was actually Isak Josef, who died in 1862 at age 78 and Mordecai and Taube were born 1805 and 1802, based on their death records. I never found anything else about Rojse, but grandchildren were named for her before Josef's death. 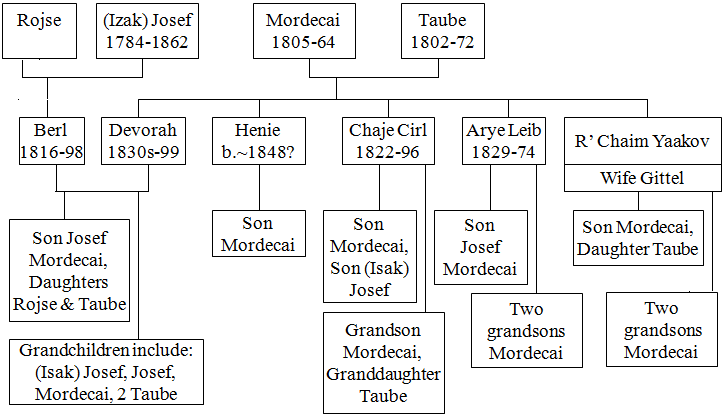 Note that Mordecai has one grandson called (Isak) Josef and another named Josef Mordecai, neither of whom seems to be a descendant of (Isak) Josef the elder.

The other contemporaneous Pikholz men in Skalat were Nachman (1795-1865), Berl (~1789-1877) and Leib (~1780-1844). And of course my own great-great-grandfather Isak Fischel born maybe 1820. Much of Nachman's family is documented to the present. Berl is probably the father of Peretz Pikholz (1820-1873), who has living descendants from all of his five known children. All we know about Leib is from his death record.

We have well-developed lines from Mordecai's children Chaje Cirl, Aryeh Leib and Chaim Yaakov, less so from Henie. Izak Josef's children include my great-great-grandmother Rivka Feige, her brother Selig and very likely Moshe Hersch about whom I have written several times. From Berl and Devorah's three or four died in childhood, one has living descendants and descendants of the others appear to have been murdered in the Holocaust.

Sam's Daughter
There is another family that fits in here someplace. Simon Pikholz was married to Dwojre Waltuch who died in 1861 at age twenty-three leaving two daughters. We have information on descendants of one of those daughters, Lea Pfeffer. Simon then married his late wife's sister Chana Waltuch, with whom he had a number of children, four of whom went to the United States and have living descendants. Chana also went to the US, but Simon did not so we assume he died in Skalat in the 1880s.

Simon had a son and a grandson named Mordecai and at least one granddaughter Taube, so he may well have been the son of Mordecai and Taube. Simon also has a grandson named Shalom (Sam) which is also the name of the great-grandfather of Charles and Leonora from the Moshe Hersch line. That Sam/Shalom assisted Charles' parents in immigrating to the US in 1939 and is listed on their papers as a distant cousin.

Without jumping to conclusions, the more detailed family structure looks like this, where some of the conclusions are based on DNA. 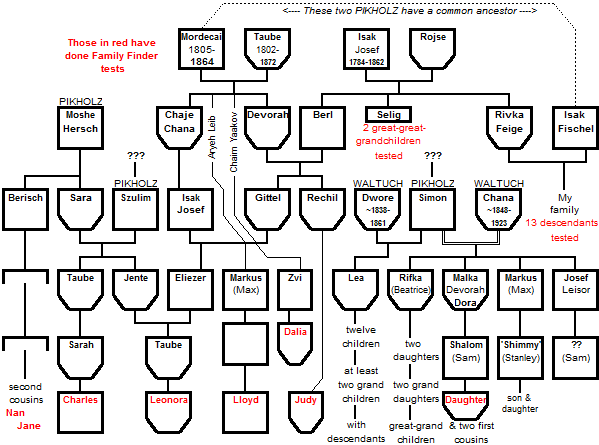 The matches within this group are extensive, to put it mildly. Everyone pretty much matches everyone else. They do not have the same level of matches with the  descendants of Nachman or Peretz. The marriage of Berl and Devorah comes from the two families as does the marriage of Leonora's great-grandparents Isak Josef and Gittel. My own great-grandparents represent a mixture of the DNA from the same two families. And if we make the easy assumption that Simon and Szulim are brothers, sons of Mordecai, then the marriage of Szulim and Sara is another between the families.

Leonora, Judy, Charles and my own family are all clearly products of both Isak Josef and Mordecai or his related DNA.

But the reasons for matches between Nan, Jane and Selig's descendants, on one hand, and Dalia and Lloyd on the other, are less easy to explain. True, we are dealing with the general phenomenon of endogamy, and true as well Mordecai and Isak Josef are almost certainly from a recent common ancestor. But those apply to the descendants of Peretz and Nachman as well, and the matches with them appear weaker than within the Isak Josef-Mordecai complex.

So now we have the matches for Sam's Daughter, the great-granddaughter of Simon. Here are the first twenty-eight, up to the classification "fourth cousin - remote cousin."
The vast majority of Sam's Daughter's matches are from the Mordecai-Isak Josef group, even though Simon seems to have a path to only one of them. As I said above, there are a few possibilities. But from looking at this data, including the individual chromosomes, over the last few weeks and discussing some of it with other people, I am thinking that there may be some other possibilities.

For instance, perhaps Lea Waltuch, the mother of Simon's two wives, was a Pikholz, maybe even the daughter of Isak Josef. That would give Simon's children paths to both Mordecai and Isak Josef. We cannot prove that, of course, even if it is true. All we know about Lea Waltuch is that there is a granddaughter named for her before 1860, so she died not live to old age.

But there is another idea I like better. As I write above, twenty-one years separate Isak Josef and Mordecai, enough that they could have been father and son, but not so much that they could not have been brothers. They could also have been uncle and nephew or first cousins or more distantly related. But what about Mordecai's wife Taube? Maybe she is the daughter of Isak Josef. That would leave any possible relationship between Isak Josef and Mordecai in play, except father and son.

Taube was born when Isak Josef was only about eighteen, but that does not have to be a problem. After all, Mordecai's daughter Chaje Cirl was born when Mordecai was only seventeen.

Taube was considerably older than Isak Josef's known children Berl, Rivka Feige and Selig, but maybe there were others we don't know or others who died in childhood. Or Taube was from an earlier wife of Isak Josef, not Rojse.

If Taube is Josef's daughter, it would certainly explain why Taube's children Chaje Cirl and Aryeh Leib had sons named Josef. That's a question that's been in the back of my mind for many years, and has never been properly addressed.

There is probably no way to prove any of this, but it does execrcise the mind on all matters of genealogy, and that too is useful. It also gives me another opportunity to say that I am happy so many names in that complicated chart are in red, indicating that they have tested - but I'd still like to get more of Simon's descendants to participate in the testing project.