Pikholz in the Land of the Czechs

Those who see my postings on Facebook are aware that I found a new Pikholz branch two weeks ago.

First there was this. The remark about none in the US turned out to be wrong.

(These were all on my personal "status." I also posted on Tracing the Tribe and elsewhere, so there are many more "Likes" and comments than just these.)

So let me share some of what I have learned and what I am thinking.

My starting point was Milton in Australia who had posted a tree on Ancestry. His great-grandparents were Eisig Baar and Sarah Pickholz who lived in Hranice Czechoslovakia (known as Mährisch Weisskirchen in German), 150 miles from Prague. They had twelve children who reached adulthood and there was no mention of any children who died young. Milton shared a photograph taken in 1892 showing the parents and all twelve children, the youngest maybe a year old.

Milton is the grandson of Emil.

The Ancestry tree listed the children in near-alphabetical order, though there were names on the photograph.

The tree on Ancestry was light on specifics, but Milton also forwarded some information recorded by a cousin, with a bit more detail. That cousin said he thought there was a thirteenth child.

My first assumption was that Sarah must have come from east Galicia - near either Skalat or Rozdol, where all the Pikholz families lived in the mid-1800s - and perhaps the Baars' first children were born there.

So I had a look at the JRI-Poland database and turned up three births to Eisig and Sura Baar in Jagielnica, not far from Skalat. Rifka was born in 1865, Roise in 1867 and Juda in 1869. I could not be certain that this was the family we wanted. But when I saw the photograph, it was clear that the four eldest children were Regina, Rosa, Julius and Gustav (who was born in 1874, according to the Ancestry tree), so that looked like an excellent fit.


So far, nothing with the name "Pickholz," but the family's word was good enough. For now. 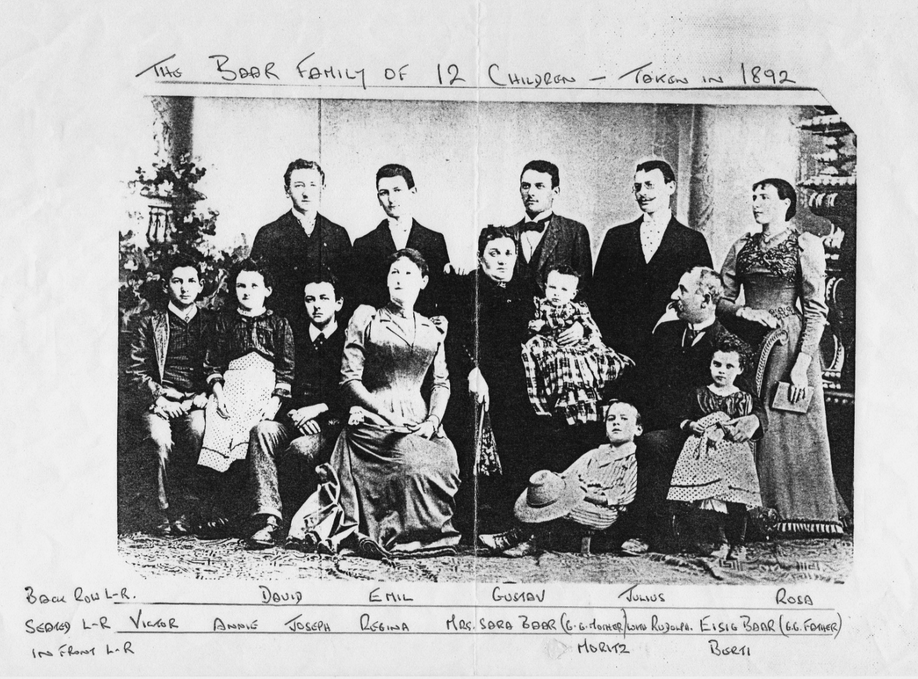 As far as living descendants, Milton knew of three grandchildren of Josef Baar, one in England and two in Canada. For sport, I checked JewishGen's Family Finder and turned up two results, one looking for Baar in Vienna. He had registered with JGFF in March 2011  and hadn't checked back in since April of that year. Not promising.

But in fact, this American is the grandson of Gustav and he is now participating in our discussions. The three grandchildren of Josef are not. Yet.

It was not clear at all who Sarah is within the Pikholz structure. I had a look at my Given Name Analysis and saw only one Sara who was even remotely possible and she was married to an Eisig. They were listed as the parents of a Dwory Pikholz who had children in Skalat in the period 1877-1893. Could this Dwory be the missing thirteenth child? She looked a bit too old for this family. Dwory has children named Sure and Eisig, born while the Baar parents were still alive, so it is unlikely that this is the same couple.

So I see no obvious candidates for Sarah's parents or siblings.

My next step was to find some documentation for Milton's tree. I  contacted Traude Triebel of the Austrian site GenTeam. Traude had helped me with several Viennese questions recently and promptly came up up with marriage records for Gustav and Moritz and several Holocaust-related documents. Gustav's marriage record showed his Jewish name to be Gabriel and his birth year 1872. Moritz was Moshe and he was born 1874 - so the photograph label identifying him as a young boy sitting on the floor was incorrect.

I inquired about Czech records on Tracing the Tribe and Raymond Minkus sent me to Václav Bednář in Hranice who provided me with more than two dozen images. There were no birth records, but a police record for Moritz from 1941 lists his mother as Rosalie Pikholz. I suspect that Sarah died and Rosalie was a second wife of Eisig, but I cannot say for certain. Other documents referred to the family's business and professional lives. Marcel Elias lent a hand in translation.

I found nearly eighty records of interest at Yad Vashem, though some of those were other Baars who might be interesting to that side of the family, not to me. Many of the family - both from Hranice and from Prague - were sent to Theresienstadt. Some remained there and others were killed in Auschwitz, Maly Trostinez and Lodz.

Much of the Baar family did not self-identify as Jews and had intermarried, but that did not save them.

Four of the records from Yad Vashem were for Milton's father Hans Milosch Baar. (The Arolsen records are in a German Soundex, which means among other things that every Hans is listed under Johann, even if Johann is not his actual name.)

Hans grew up to never be sure of what he had, and felt very insecure. This went on into his adult life because of the Depression and later because of the Hitler oppression. He did not believe in thinking of or preparing for "the future". It was "what you had today" that counted. Have it NOW, spend it NOW, enjoy it NOW. For him there was no "tomorrow". That is how he came to have the nick-name "Tobby". He was known by his family and friends to say each day - "Well, is it To be or not To be" - in reference to whether he would be able to eat that day, get or keep a job that day, or later on to survive that day. He was eventually known jocularly as "To be", and he spelt it as Tobby. When he came to Australia he was naturalised as Hans Milosch Baar (known as Tobby Milton Baar) and on all legal documents became Tobias Milton Baar.

We are still working on all these documents and other aspects of the Baar family, but in the meantime, I think I figured out who Sarah is.

Four months ago, I wrote here about the RISS family and the seven children of Breine Riss, the daughter of Gabriel Riss and Ryfka Pikholz. Breine's children were born in the 1860s and 1870s and five of them have names that appear among the twelve Baars. There is nothing remarkable about two families with children named Rifka, Rosa, Josef and Moshe, but when both start with Rifka and both have a Gabriel, it is worth considering that these may be Sarah's parents, not just Breine's.

Add to that the fact that Breine has grandaughters named for her in 1888 and 1889 and Sarah's youngest is Berta.

I am trying to get a few members of both families to do Family Finder tests. We have great-grandchildren of both Sarah and Breine and third cousins is easily within the scope of autosomal DNA.

In addition, there is a family story that the Baars came to Poland from Spain, so I suggested to Milton that he might want to do a Y test as well.
Posted by IsraelP at 7:30 AM