Here is a look at the families of the nine Pikholz descendants of Rozdol families who have tested for our project thusfar.

All nine did Family Finder tests and the three with male lines did Y tests. (Amos, who is our only female line, did an MtDNA test, but for now we have no one to compare him to.)

(We have several Rozdol lines that are not represented here and most of the ones we have could do with additional test participants - particularly the line on the far left. Several people said they would test, both with Family Finder and with Y tests, but did not follow through. A few others simply said "no" or ignored my requests.) 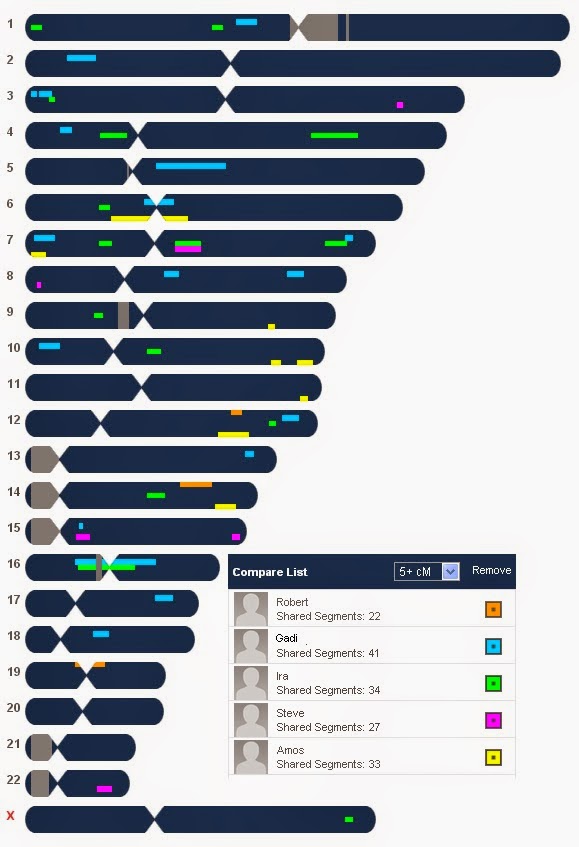 I put the results into the chromosome browser, a tool which shows how up to five people match the person represented by the black background. In this case, the black background is Esther, chosen for that role simply because she matches all the others.

Since the browser can handle only five matches at a time, I did this in two parts - the ones here on the right and the ones just below on the left.

Since Ira (green) and Steve (purple) are fairly close to one another - second cousins - it is not surprising to see that they both match Esther in the same place on chromosome #7.

In fact since a person has two of each chromosome - one from the mother and one from the father -  it is possible that Ira matches Esther's mother's chromosome, while Steve matches her father's (or vice versa) but we shall ignore that for now. 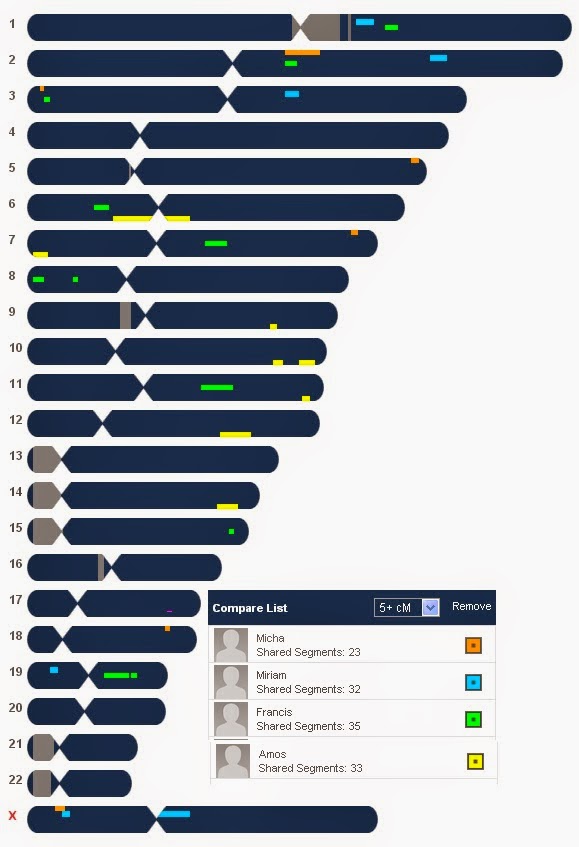 Amos (yellow) and Gadi (blue) match Esther in the same place on chromo- somes #6 and #7.

On the second browser, we have  the three cousins Micha (orange), Miriam (blue) and Francis (green) and I left Amos there as well.

But there are also some matches that include both groups. At the left end of chromosome #3, Gadi, Ira, Micha and Francis all match Esther more or less together.


I have little doubt that we would have a clearer picture if we had additional family members testing, as well as a better grasp of the analytical tools.

While I was at it, I also did chromosome browsers for Esther with the non-Pikholz who match many of us. The left side of the image includes Mark, Lily, Victor, Cynthia and Kenneth. Victor and Cynthia are known to be second cousins. On the right, we have Marla, her uncle, mother and brother - a family I discussed in some detail a few weeks ago.

The matches in Marla's family on chromosome #1 and five others are unremarkable, as we know them to closely related to one another.  What we did not know is that Esther shares these matches with them.

Marla's brother and Victor (both in green) both match Gadi and Esther near the right end of chromosome #12.

When we compare these non-Pikholz matches to the Pikholz marches above, we can see a number of overlapping matches - all with Esther, of course.  We have Amos and Kenneth (chromosome #6), Ira and Marla (#7), Mark and Gadi (#8), Lily and Gadi (#16) and Robert and Marla (#19).

Once again, more data and a better grasp of the tools would help.