A few weeks ago, my friend Marla Raucher Osborn posted on Facebook about a birth record for her grandmother's sister Sime Horn, who died in Rohatyn in childhood. Some discussion ensued about notes of death being recorded on birth records and about the importance of reviewing documents, letters and other papers from time to time because what looked unimportant when we first saw them, may be significant now. 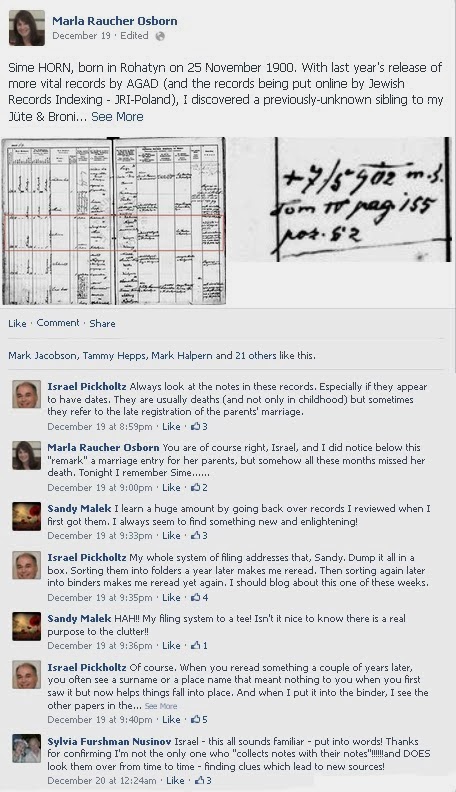 Sandy Malek, the legal counsel of Gesher Galicia, mentioned that she "always seem[s] to find something new and enlightening" when having a second look at documents. Veteran researcher Sylvia Furshman Nusinov said that she "DOES look them over from time to time - finding clues which lead to new sources."

My contribution to the discussion was to explain that this is in fact the way my three-step filing system is designed, at least regarding genealogy-related paper.

Step one
When I have a document, whether it is a vital record or some of my own correspondence or something else, I read it, record whatever seems relevant and put it into a box.

In the case of vital records from Warsaw, I usually make a note of the family on the back.

They stay there for months. At least.

(Non-genealogy-related is another matter, which I'll mention below. Things like utility bills get filed in binders, immediately. Other receipts, insurance and bank documents etc should as well. Sometimes I fall behind. A lot.)

Client papers go in a pile in a drawer and are filed from to time - usually when I need something and can't find it.

Step two
From time to time, I go through the box and put the papers into sectioned cardboard files 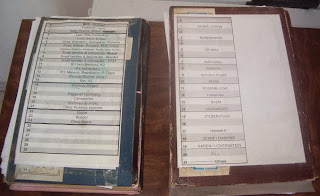 (There must be a name for these - in Hebrew, it's a "sadran.") like those pictured here. The one on the left is my Pikholz filing, the one on the right is everything else.

For the most part, this is not just a matter of putting the paper into the right place. In order to file them properly, I generally have to reread the documents. Often in doing so, I will see something I missed months earlier. Or there will be some piece of information which was meaningless at the time, but has since become a point of interest. The name of a witness, a town or street address, some event that suddenly takes on significance, something else I could not have known when I first touched the particular paper.

A paper like that goes through the recording process, almost as though it were entirely new.

Step three
Every once in a while, I will take the papers from one or more of these sections and and put 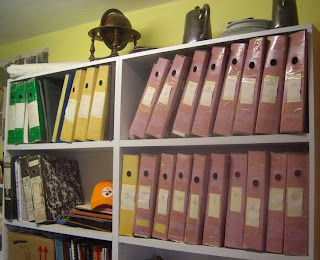 them into the appropriate binders.

As in  step two, moving each piece of paper involves rereading it and  re-evaluating its contents. But there is more because putting the papers into the binders brings me into contact with older papers which are already filed. Sometimes it is those older papers which produces new insights.

Paperless office?
Of course all of this requires paper.  Online-genealogy guru Dick Eastman has been on a "paperless office" crusade for some time. A post last week opened as follows:


On January 1 of this year, I wrote a short article entitled A New Year's Resolution: Going Paperless in which I promised I would stop wasting paper and not file all sorts of paper in piles, nor in binders or filing cabinets. I am happy to report that I have achieved nearly 100% success during 2013.

I now print almost nothing on my computer. Most everything is saved in Evernote or in an appropriate folder in Dropbox. Of course, the same items can be retrieved quickly and viewed not only on my desktop or laptop computers, but also with my iPhone or iPad, wherever I am. (An Android phone or tablet will do the same.) The few pieces of paper that need to be given to others are usually sent by email, never printed and mailed.

He goes on to discuss different types of paper - bills, bank records and of course genealogy. (He also discusses back-ups and is partial to "the cloud" for that.) He concludes his recent piece::


I can report 99% success at being paperless during all of 2013. I no longer have mounds of paper lying around. I can find anything quickly and easily, thanks to the capability of quickly searching the computer's entire hard drive for any words. I can retrieve any item quickly when I need it.

I can see this with utility bills and other expense records and will even give that part of paperless a try in 2014, though the eight-page monthly cell phone invoice is a challenge. . Bank and other type records are a bit more complicated because it means I have to deal with them before they pile up. But genealogy paper?

If I were to go paperless, it would kill my entire filing system as I would never see those documents again unless I went looking for them specifically. I certainly wouldn't leaf through them, as I do with paper files..

Online genealogy
Although it was not my intention in discussing filing, I come back around to online genealogy of the Geni-type, which I discussed at length three weeks ago. But it comes up on its own.

In private correspondence, one of the Geni advocates wrote:


I make a discovery, I enter a branch into Geni, I upload all my photographs and documentation, and phew!, I can rest easy that I have put everything in its place and move on to my next interest.  And when I am looking for it again, I know where it is.

For me that's a negative. I don't want to simply "rest easy...and move on" I want to see old documents and correspondence even when I am not looking for them.  I want to have to review each document and letter in each of the three steps. It doesn't have to be how other people work, but it's my system. My research heir - if I will be fortunate enough to have one - can do it differently if he wants, when the time comes.

1. Today, 4 Shevat is yahrzeit for my grandfather and begins a string of family memorial days during the month, a few of my wife's ancestors (including her father, her maternal grandfather, her paternal grandmother and others), my mother (here and here) and my sister - all in Shevat.


2. I have submitted two proposals for the 34th IAJGS Conference on Jewish Genealogy, to
be held in Salt Lake City next summer. And I made a reservation for the conference hotel. None of this means a commitment, just yet.


3. The following was written to me by a possible non-Jewish DNA match. The last sentence is hilarious. (Emphasis mine.)


Anyway, it's more than a little difficult to find the common thread between everyone in my search for a place of origin, but it seems *very* safe to assume that my "epicenter" for this would be the Pale of Settlement/Congress Poland... basically the [east] Galicia region you mentioned. And judging by the tiny sliver of it involved, I'm also guessing a birth from around 1700. But how/when/why they got to America is a complete mystery to me.