ALL A MATTER OF TIMING


In late June, I received an inquiry from a woman named Louise, living somewhere in Israel. She was looking for information on her father's line and had been referred to me by Stanley Diamond of JRI-Poland.

Recently I have found the Gnivish family in Canada. They say we are related. There was a 17 th century Rabbi that took the name of his town Gnivishow. All the Gnivisch's stem from him. He is on the geneological tree of the Baal Shem Tov. His granddaughter married a grandson of the Rabbi Noam Elimelech.
So how do I find out if this is my family?
I need to find out about my great grandfather Samuel Gnivish from Poland.

How do I do that - cant find anything in Jewish geneology as records for Krosno are from 1900 or so - too late.
What do you think?
I have documents if there is anything you think might give a clue.

A couple of days later, she added that the 17th century rabbi's name was R' Pinchas.

A few days later, I replied:

I did a bit of looking around without turning on the meter and I am not
encouraged.

I see that your great-grandfather and his wife Debora Hollander has stillborn twins in Krosno in 1893, the record being for the town of Korcyna.

You are correct that there do not seem to be earlier vital records from
Krosno, but do you know how long that had been their home? Perhaps thirty years earlier they lived someplace else.

The Central Archives for the History of the Jewish People is being integrated into the National Library here in Jerusalem and there are a few earlier microfilmed records for Krosno, but these are not vital records. These would be community records rather than individual records. Even if an ancestor might be on a list of melamdim, there would likely be nothing attaching him to either previous or subsequent generations. Even so, most of these records are later - the earlier ones are from about 1877.

I did not mention that I do not have any particular expertise in rabbinic genealogy.

Louise replied that she wanted to meet, but would be going abroad for six weeks. As I was planning to go to the US in August, I suggested that we start from scratch after the holidays. I figured that by then we would need to start from scratch as I would not remember any of this correspondence by then. But I opened a file with her name on it and made a note on my calendar to drop her a note after the holidays.

For some reason, it was 24 October – four weeks after the end of the holidays – that I sent her a note and we made an appointment to meet in my office on 7 November. At this point I had no recollection of what she wanted, but we were going to start from scratch so it didn't matter. I did note the subject ine that accompanied all our emails "Gnivish family tree."

The following Monday, 28 October, I attended a seminar at the National Library – the staff there is trying to get involved in genealogy and invites genealogists to lectures from time to time. They want to make their resources aavailable to genealogy researchers on one hand and to learn how to best serve the genealogy community on the other.

Several of the speakers emphasized errors in rabbinic genealogies, often as a result of misunderstandings or ambiguities that get copied from one person to another. This is a matter in which I have some interest, as my regular readers know. 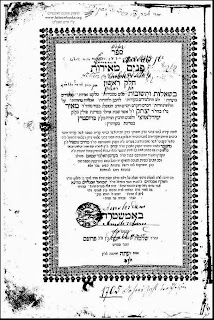 One of the speakers was Rav Yehiel Goldhaber, who works at the National Library. I did not realize at the time that he is American-born, as his accent is what we call yishivish. Goldhaber spoke about the family of Rav Meir ben Yitzhak Eisenshtat (1670-1744), who is known by the name of his major work Panim Meirot.

As Goldhaber ran through the names of R' Meir's children – not all of whom appear in the published genealogies – he mentioned that one of his daughters had married R' Pinchas Gnivish. Well, that was a name I had seen just a few days earlier, in the subject line of my correspondence with Louise. So I took his personal email address and  dropped him a note the next day. He said he would be pleased to hear from her.

So the next week, I met Louise in my office.  She was aware of the connection of R' Pinchas Gnivish to the Panim Meirot and in fact had a copy of the book itself. She was delighted to hear that I had made a contact with someone who had been doing serious research on the family and she called R' Goldhaber right then. They set to meet at his home later that afternoon. (She lives more that hour from Jerusalem and wanted to get as much done on this trip as possible.)

While she was here, the subject of Louise's Kushelewitz line came up so we had a look at the JewishGenFamily Finder, my resource of first resort. There we saw that this the husband of a friend of mine is doing that family, so I called the friend on the spot and I let the two women discuss that.

I understand that the meeting between Louise and R' Goldhaber was very productive, for both of them. She wrote the following:

Was wonderful - like a dream - to meet Rav Yehiel Goldhaber - so thankful you went to his lecture
Will meet him again on his return and will put him in contact with the lovely Canadian Gnivishes .

It turns out my copy of Panim Meirot is very rare and of great interest to Rav Yechiel as it has much added handwritten text.

You never know exactly when you should be paying attention, but sometimes it's all in the timing.
Posted by IsraelP at 7:30 AM