THE ROSENBLOOM FAMILIES OF BORISOV

I have referred to my maternal grandmother's Rosenbloom family on several occasions here, but neither recently nor in great detail. The truth is, there isn't much detail at hand. In fact, we have several Rosenbloom families from Borisov but we have no idea how they fit together or even if they do.

My Great-Grandfather's Family
This week, with the yahrzeit of the younger of my mother's two older sisters coming up Thursday, seems a good time to see where we stand on this family.


Aunt Sadie Gordon - Shayna Liba bat Yerahmiel and Sarah - died twenty-one years ago at the age of seventy. She was born in Vandergrift Pennsylvania and lived her entire adult life in Pittsburgh where she was a secretary to an attorney. She never married. When I was very young we saw her frequently, then she pretty much disappeared from our lives until after my grandfather died. I don't think I saw her after his funeral, but we did exchange letters a few times a year.

Aunt Sadie was named after my grandmother's sister who died at about age twenty-seven in New York. She was married and had no children. Her husband disappeared, perhaps returning to Russia.

My grandmother's sister Shayna Liba was the daughter of my namesake Israel David Rosenbloom and was named for his mother. Aside from the fact that her husband's name was Yaakov, we know nothing further about the family. No ages, no parents, not even if they had children other than Israel David.

Israel David Rosenbloom died in Penza sometime after 1929. The family had moved there after WWI. Or perhaps had been sent there. I exchanged a bit of correspondence with the Jewish community of Penza, but they could tell me nothing about his death or burial.

I have spent very little time and effort on Rosenbloom research in the last few years and that part of my family history seems to be walled off. My DNA tests are out there, but nothing obvious showed up thusfar. I approached two of my six male Rosenbloom second cousins about doing a Y-37 test , but neither was inclined to do so. We never got as far as Family Finder, as the Y-chromosome is more valuable here.. 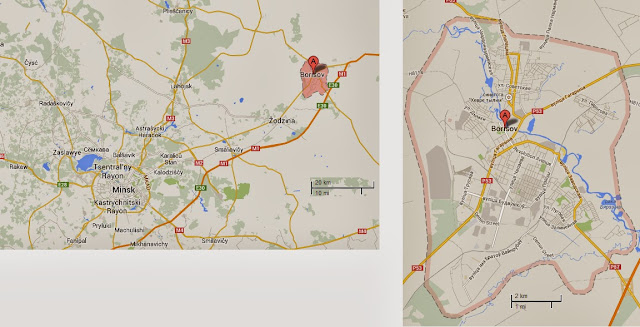 There were other Rosenbloom families in town, in addition to that of Israel David ben Yaakov. there was Zalman Rosenbloom and his wife Esther (Friedland), who had nine sons. The family went to France in the first decade of the 1900s, and I had some correspondence with a grandson, Edouard, seventeen years ago.

Zalman died in 1937 and Esther is 1935 and both are buried in Paris. The cemetery records do not include their parents' names and Edouard told me that the parents names are not on the tombstones. The cemetery records say that Esther was eighty-one, meaning she was born about 1854, So Zalman was probably born in the early or mid-1850s, only a few years after Israel David. Maybe even a bit earlier.

There are, however, voter records for the 1906 Duma, the Russian parliament, which include two listings for Zalman Rosenblium of Borisov. In one his patronymic is Beniaminovich, in the other Bonevich. I don't know if these two are the same person but Zalman is clearly not a brother to Israel David, whose father is Yaakov.

Then there is the family of Alexander Rosenbloom, who lived in Borisov until the late 1990s, when he and his family came to Israel. We met him and his wife Lilla at their home in Ariel. previously we had met his daughter Rosa and her husband at my sister's home in Elkanah.

Alexander knew his family in Borisov through his father Boris (b.1897), his grandfather Shaya (b.1869), his great-grandfather Tanhum and his great-great-grandfather Moshe. There is no place on this line where Israel David ben Yaakov or Zalman ben Binyamin could possibly fit in.
In the course of preparing this blog, I received an eighteen page pdf from Alexander's son Felix with a much more detailed tree. The additions are all in the descendants of Mordecai and Tanhum, so for the purposes of determining the relationships among the families, the sketch above is adequate.

So we are still clearly talking about either distinct families or a single family that goes back quite far.

There is no question that I need to go over all my notes and papers and see what the
databases have added these past years. I had a look at the JewishGen Family Finder a few days ago and saw that there are four researchers registered and all four have logged in during October, so we are talking about people with an active interest.

It is my understanding that Zalman's French family does not have many descendants, even fewer who are Jewish. Three of Zalman's nine sons were deported to their deaths during the Holocaust. My contact Edouard was born in 1915 and his first cousin the well-known research Bernard Kouchel, who made the introduction,  died a few months ago.

Tuesday and Thursday evenings this week, I'll be participating in webinars on DNA analysis - one for project administrators.

I plan to attend an afternoon-long seminar "Sources of Rabbinical Genealogy Research in the National Library" at the Library, on the university campus next Monday.