THE PROBLEM
The state of my home office is kind of getting to me. 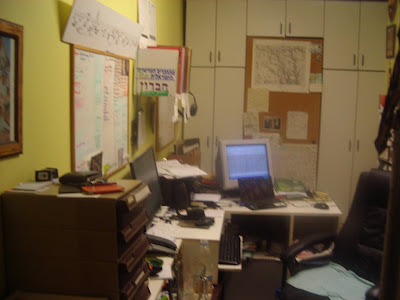 It's two meters wide and four meters long, not counting the closet at the far end. 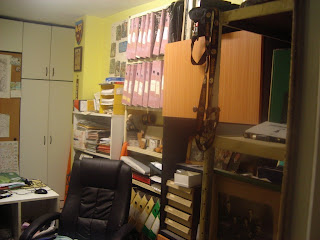 It has no window.

It's furnished with whatever I had at hand when we moved in, nearly five years ago. At the time, I had just left my drudge job and begun taking genealogy clients. I had no idea what I needed, so I set up based on what I had.

These two photos were taken from the doorway, leading from a closed-in porch which serves as a laundry room and spare bedroom.  It has a very large window overlooking a main street and generously lets in lots of noise.

The closet on the far wall came with the apartment. The cork-covered door in the middle leads to a bathroom, but I rarely use that doorway. I had the cork put on. Previously the door had been covered with a full-length mirror.
The office chair faces my desktop computer which now uses a 24" screen. After I bought the tablet three years ago, I realized that it can serve as a bulletin board, as well as allowing me to have more things going on at once. When the 24" screen arrived, the older screen went to my son's room and his old clunky monitor came to me and the tablet is now attached to it. (When I have a chance to find a used flat-screen, I'll solve part of that problem.)

The wall I face when working has a couple of bulletin boards - one I hardly use anymore - and a small bookshelf for dictionaries, Bibles, a Hammond's World Atlas that I had been in print ten years when I got it for my bar mitzvah, and my Concordance. And a thesaurus that I also got for my bar mitzvah.

The second photograph shows four shelving units. The furthest one is something I made for Devir's toys when he was young and it fits here very well. The wooden cabinet is something I picked up at a second-hand store, seven or eight years ago. It has served it's purpose well, but it's really ugly and in very poor condition. The two sets of metal shelves have been with me for forty years, reassembled more times than I'd care to count as I moved from place to place. Despite their history, I think I am ready to part with them.

To the right of the door at the top of the wall is a heating / air-conditioning unit. It's definitely a necessity, though I'm usually too cheap to use it.

The two shelves of purple files in the top center are all Pikholz Project. The box of papers on the far end of the top white shelf are Pikholz Project papers waiting to be filed. Waiting is part of my system, but it's been too long. 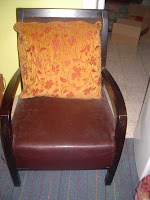 There is also a large arm chair on the right as you enter the room. It's just below what you can see in the second picture. It's too big for the space, but I really really like it and when we moved here it was probably less than a year old.

And if that was everything, it wouldn't be half bad. But soon after we moved, we realized we didn't have enough refrigerator space and I like to have a few bottles of cold water close at hand. So we bought this, used, of course, and it found a place between the white table and the far closet. 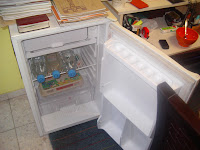 When Mother moved out of her independent apartment, I added her desk to my collection. Mother brought that desk with her from Skokie twenty-six years ago.

There was no place for that but between the white table and the closet - where I almost never use it - so the refrigerator moved over next to the door. Now it's really crowded. 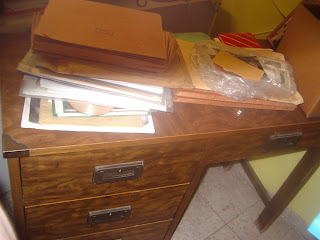 It's crowded, inefficient, with "to do" piles scattered all around and it's making me a bit nuts. (The Hebrew expression is that it gives me "harara" - a skin rash.)

THE SOLUTION
So I asked Anat Gertner to come and have a look. Anat is an interior decorator whom I met back when I went to weekly meetings of a business networking group. I figured that an hour of her time was worth it to get me started on dealing with it.

Anat had a lot of questions, most beginning with "Do you really need..." Clearly the bulky screen had to go. She liked the big armchair, but it has to be placed better.
How about if I turn around and face the corner to the right of the door? I'm not sure I can handle that as it would disconnect me even more from the window on the porch. besides, facing a corner seems more confining. And then I'd have to rearrange all the electricity. And the phone line. But Anat likes the idea of shelving along the long left wall. She says that sitting in the middle of the room is inefficient.
Do I really need the refrigerator? I think so. I really like to have three bottles of cold water at hand.
Do I need the desk? Well, it's my mother's desk. And who will want it after me? One of my kids, I'd hope. They were all close with Mother.

Devir returned from a three-day class trip and saw I was doing things in my office. He asked what is going on and I told him I was making some changes, changing some furniture. He said "Not Savta's desk." So that settles that.

Anat took a look at a shelf full of odd items and pointed to a small plaster building. The conversation went something like this: 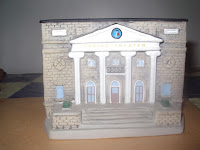 That's the Casino Theater a landmark building in Vandergrift, where my mother grew up. It was across from my grandfather's store.
Why do you have it? Do you really need it?

Well, I bought it from the local historical society when I visited three years ago.

Where in Europe is Vandergrift?

Europe? It's about an hour from Pittsburgh.

Anat wants to get rid of all the shelves and tables. Things should be even and uniform. And she says I need real drawers, not just those plastic sets of four that I have all around. And I do have six real drawers - one with stamps, one with drivers and software manuals, one with computer cords, phone cords and such, one with pills and stuff. Plus the drawers in Mother's desk, which have mostly unsorted photographs.

She also wants me to move the scanner/printer further away from where I sit. She says it takes up prime real estate. (In the picture at the top, it's that black thing between the two computers, with the papers on top.)  I am sure she is right about that, but if I use that space for the tablet & screen, thus opening up space on my right for work, I may not be able to see that screen as easily.

On top of the shelves to the right of the door are a couple of teapots and some plates from my wife's great-grandfather's restaurant in England. After her father finally shut it down, we ended up holding on to a vast quantity of plates, cutlery etc. Most of that is gone, but I insisted on holding onto a few pieces. Anat says they should go on a special glass shelf on the wall. That way maybe I'll polish them more than once a year.

Anat really doesn't like the small alarm clock but I want an analog clock with numbers, where I can see it. Not just the numbers on my computer or cell phone.﻿
﻿Jewish Law requires an unfinished patch in a home, as a zecher lemikdash - a reminder of the destruction of the Temple and the glory of Jerusalem. Mine is in my office, on the right wall above the white shelves. It stays where it is.

The center says "If I forget you, Jerusalem, may my right hand lose its cunning. The pictures are from an old Passover Haggaddah or the sort we used at my grandfather's seder.

What about all the files, Anat wants to know. Can't they be scanned? I'm sure they can. Dick Eastman goes on about that all the time. But the scanning is alot of work and I'm still from the older generation who feels more comfortable with paper. And I'm not sure I trust the computer to keep it all safe, back-ups or no. Well, Anat has a suggestion for that - a friend who helps people organize themselves. Basically another pair of hands, though my brain sometimes has trouble controlling the pair that I have. And if she is going to scan files, she needs access to the computer, right?

So I concluded our meeting having tentatively decided on a a three-step process. First I would get rid of or consolidate everything I can. That includes getting things into temporary storage boxes for the duration of the process as well as getting rid of some of the furniture.

Second, I should talk with Anat's organizer and determine what she can do for me. And do it.

Third, go back to Anat for more specific advice about replacement shelving etc and arranging the room.

PROGRESS
I am not going to keep you informed as I go along, but I'll probably give you a peek at the final results.