It has been a busy week, what with the holiday preparations and a few other things going on, so I considered taking a break from blogging this week. But I didn't want to leave last week's uncomfortable blog on the front page for another week, so I will briefly introduce those who have not seen it to the PIKHOLZ PIONEERS page.

Why that? Well, we will be telling our children Monday evening about our ancient exodus from Egypt, so I thought it appropriate to show the page that documents those Pikholz descendants who left eastern Galicia before the Holocaust, whether to the United States, to Palestine or to other supposed safe havens. For had our forefathers not left when they did, we know what have happened. For we know what happened to most of those who didn't.

You reach the Pikholz Pioneers page from a link on the main Pikholz Project page and that bring up this: 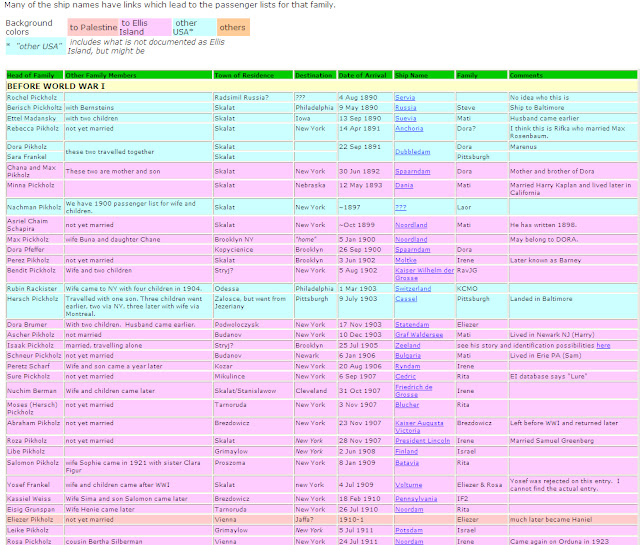 The page is arranged chronologically, according to the dates of arrival of the various heads of the families, regardless of whether other family members arrived earlier or later.

Like almost everything I do, the chart looks to me to be self-explanatory, but since other people rarely see it that way, let me lead you across the green row of headings. The first column is the head of the family - whichever of the husband and wife is the Pikholz - or in some cases an unmarried individual, usually travelling alone. Other family members are mentioned in the second column.

The third column is the town of most recent residence, usually as listed on the passenger manifest. That is followed by the destination and the date of arrival. The sixth column is the name of the ship that carried the person listed in the first column and that is linked to a page which generally shows the passenger list itself, as well as the manifests of other family members. Sometimes we do not have the ship name, so it is blank.

The next column is the family identification name. I did not link those, but you can find them on the Tree page. The last column is comments.

The list goes until the spring of 1940 and is color-coded by destination: New York, other US, Palestine and "others."

Of course, what would the run-up to Passover be without some
Housekeeping Notes:

I had submitted two proposals for talks at the Boston Conference and one was accepted, that being the one that discusses the Pikholz DNA Project, which I have described here on several occasions. My previous two talks at IAJGS conferences were scheduled for early the first day, before many of the antendees had arrived. Nonetheless, I had full rooms both times. This time they have not yet announced the schedule so I have no idea when I'll be speaking.

The extract for the lecture reads as follows:

As a genealogy research tool, is very tempting because it tests the scientific genealogical makeup of possible family members, but at the same time uses analysis based on statistics and probability that can lead to incorrect or unfounded conclusions. The experts' explanations often confuse more than they illuminate, especially when you consider that some of these experts are the ones selling the testing services. So what is the lay researcher to do?

This talk will tell the story of one researcher, strictly a layman, who – despite his skepticism – used testing to turn his basic family structure on its head, with more plans on the way. And despite his intentions to continue with this kind of research, remains something of a skeptic.

I have also begun to schedule my travel plans. I arrive in Boston on 1 August and have a friend who is arranging me a place for Shabbat. If anyone in the area wants to meet Thursday evening or Friday during the day, let me know.

I'm planning on sharing a hotel room at the Conference with a third cousin of my wife's. He is from Monument Colorado and we found each other a couple of years ago.

The next Friday, after the Conference ends, I'll be flying to Miami, where I have never been before. I want to have a chance to visit the various Pikholz descendants there, including my father's cousin Herb whom I met only once before, when I was fourteen. There are a number of other Pikholz descendants in the area, mostly from the Rozdolers. I hope to meet as many of them as possible, but I'll leave the organizing to them.

There are also at least twenty-four Pikholz graves in six south Florida cemeteries and I have photographs of only five of them. So visiting those is also on my list. I'm guessing I'll leave Florida on Tuesday for points unknown.

Everything between then and my return home 26 August (from Chicago) is open, as there are some family matters which have yet to fall into place.
Posted by IsraelP at 8:30 AM