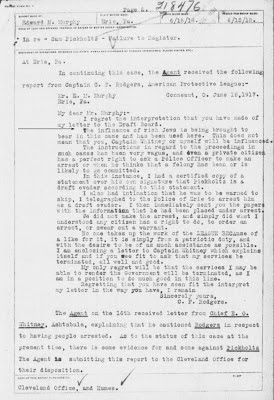 (An earlier version of this was published in The Galizianer, May 2009.)

I was really looking forward to the 27th Annual IAJGS Conference in 2007.  I had never been to Salt Lake City.  In fact, I had never done any research at any of the Mormons' Family History Centers, since their missionary work precludes their having any public facilities here in Israel.  So although I looked forward to my visit, I had no idea what to expect.  I accomplished much, both at the Conference and at the Family History Library, but my first discovery came from an entirely different type of source.

On Monday morning I attended a lecture by Beau Sharbrough about a new company called footnote.com (since renamed  Fold3, with a specialization in US military records), which had acquired rights to film and make available records from the National Archives, among other sources.  The basic information on the website is available at no charge, but seeing the documents themselves requires either a paid subscription or a per-document payment.  During the Conference, we had free access.  The lecturer made much of the fact that in addition to standard documents such as naturalization papers and alien reporting, they would also be making available federal investigations that resulted from anything from organized labor to nosey neighbors.  Those investigations included not just the charges, but the responses, documentation and references provided by the accused.

I did a search on the various spellings of Pikholz and found an eleven page file for Sam (originally Schneier), the son of Szama Pikholz and Minnie Fried from Budzanow.  Sam was almost certainly a third cousin of my father, though thirty-odd years older. (None of our Pittsburgh seemed to be aware of a cousin not far away.) 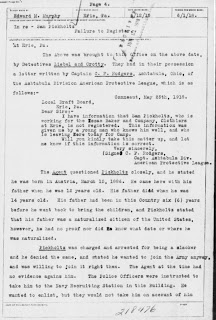 It seems that in 1917, while Sam was living in Erie PA, one Capt. C.F. Rodgers of the American Protective League in Ashtabula Ohio charged that Sam was a draft dodger.  Sam was arrested and upon interrogation related parts of his personal and family history, including the claim that he was too old for the draft.


As part of his defense and in the presence of the investigators, Sam attempted to join both the army and the navy, but was rejected.  The agent determined that Sam had voted in June 1917 and “gave his age then as 31 years and 4 months.”  Despite the fact that Sam's defense was not based on any documentation, he was released from custody.

Rodgers had Sam arrested a second time on the same charge, but through the investigative office in Erie PA.  This second investigation revolved around a birth date of March 15, 1888 that appeared on Sam's application to join the Elks Club, a date which Sam himself claimed was false.  Rodgers also claimed that in an application for an urance policy, Sam gave his birth date as , supposedly supported by a birth certificate.

In the course of the investigation, Rodgers wrote to his APL superior saying that if the local investigator did not act as Rodgers thought he should, he (Rodgers) would "take the matter up with …the U.S. Attorney at (sic) Pittsburgh, who is an old personal friend."  Rodgers closed by saying "I hear that rich Jewish influence is being brought to bear in this case…"  This theme appears in several subsequent letters from Rodgers.

Eventually the case was closed and Rodgers was criticized from all quarters, with recommendations that his commission be terminated.  They also determined that Sam was ineligible for service in the US Army, as he was an "Austrian Alien Enemy."


Much of Sam's defense was based on claims which could not be proven one way or another, for lack of documentation.  But some can be proven – or rather disproven - by what we know now.

Sam’s mother Minnie died in New Jersey on 9 May 1938, so the statement about both his parents’ being dead was absolutely false.

We have no indication that Sam’s father, Szama (sometimes Schama), was ever in the , much less became a citizen.

On his marriage license application (1919) he says he was thirty-one.

So unless Sam and his brother Harry had actually exchanged identities, it seems that Captain Rodgers was on to something. Here he speaks at length. (The arrow is mine.) 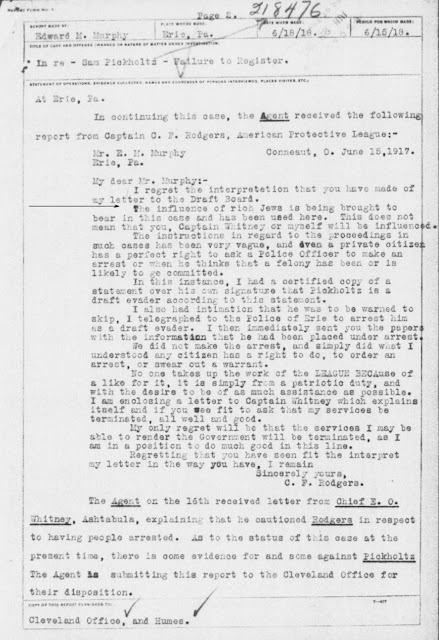