Twelve and a half years ago, I found a Page of Testimony for Salomon Shemuel (Klar) Mensz of Lwow, born 1865. The Page was submitted by his daughter Yehudit Mensz Benari of Petah Tiqva, in 1957. Salomon's wife was identified as Sara Rivka Pickholz, age 77.
﻿
﻿
I pressed the link for other pages submitted by the same person (complicated by the fact that sometimes Yehudit's name was transcribed "Benari" and sometimes "Ben Ari) and found the Page for Sara Rivka, which did not mention her maiden name Pickholz.

It did tell us that she had been born in Rozdol in 1864 and that her parents were Aharon and Gittel. Sara Rivka is, as I have mentioned before, the name of the matriarch of the Rozdol Pikholz families and the dates are such that this new Sara Rivka could have been a granddaughter, but was more likely a great-granddaughter.

Although we have the Rozdol birth records for that period, I do not see a birth record for Sara Rivka. Nor do I see any other references to her parents Aron and Gittel or to any brothers and sisters she may have had.

The Page also said that Sara Rivka had five children and Yehudit submitted Pages of Testimony for the other four - Arnold (Aron) and his wife Ella, Jetty Roza/Rachel and her husband Natan Lew, Marek (Mordecai) and his wife Sara and Pawel (Pinchas). She also submitted a page for an undefined cousin, Fanka Pikholz-Kranter, who had been born about 1900, supposedly in Lwow, though I have not found a birth record in Lwow or anywhere else.

I continued to search the Yad Vashem website and found that additional pages had been submitted in 1997 by Uriella Eran, apparently Yehudit's daughter. (Here too, many of the Pages had been transcribed as Ariella, which complicated the search.) I located Uriella and her husband in a retirement home and went to see them. Her brother Amos and his wife joined us.

None of them had ever heard the name Pickholz and they could not tell me anything about Sara Rivka's family, neither her parents nor her siblings (if she had any).

Uriella told me that she had a younger brother Rafi who had been killed the day before Pesach 1948, in the War of Independence at age twenty-one. Rafi is buried in Kiryat Anavim, near Jerusalem. 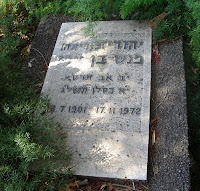 Yehudit died 11 Kislev 5732 and I am posting this exactly forty years later. She is buried on Kibbutz Ein Harod, where she had lived for most of her adult life.

It turns out that one of the three sons of Yehudit's eldest brother Arnold survived the Holocaust and he has three children living in Poland.

In the meantime, I have acquired the birth records for all five of Sara Rivka's children. They were all born in Lwow, which is good, because Lwow birth records list not just the mother's parents, but also the mother's mother's maiden name.
Here is the birth record for Yehudit, using her birth name Josefa. Her children did not know that given name, but did know that she was sometimes called Pepi, which can be a nickname for Josefa. Her mother is Sara Pikholz, daughter of Gittel Pikholz and the late Aron Kranter. No mention of Rozdol.

The birth record for Aron (Arnold) from 1890 lists his mother as Sara Kranter, daughter of Aron Kranter and Gittel Kranter of Rozdol.

Finally, the birth for the youngest brother Pawel from 1904 says Sara Kranter, daughter of Aron Kranter of Rozdol and Gittel Pikholz.

So despite the variations in the records, we know that Sara Rivka's parents are Aron Kranter and Gittel Pikholz. Fanka, the undefined cousin whom I mentioned above seems to be a niece of Sara Rivka, as she uses both of those surnames.

This is the only Rozdol family where the top couple is a Pikholz woman and a non-Pikholz man. It is clear from the names that they are descendants of the known couple Pinchas and Sara Rivka, but how they might be connected is anyone's guess. We may never know.

We are working on a December date for a Jerusalem talk on:
A DNA SKEPTIC TURNS HIS FAMILY ON ITS HEAD AND REMAINS A SKEPTIC
Details to follow.
Posted by IsraelP at 7:30 AM