SOMETIMES THE ERROR IN THE DATABASE COMES FROM THE RECORD ITSELF

I wrote a few weeks ago about errors in online databases and promised there would be a few more examples. The example then was based on transcription of the original record and policy about approximating ages. This time it's something different.

A few years ago, I found a set of records in JRI-Poland for the children of Jakob Pikholz and his wife Henie Malka Ginsberg of Skalat - ten in all.

There are actually nine children here - the first one has two records, six weeks apart. That has to be some kind of error. Perhaps the second was meant to be a death record, as we have nothing further on this daughter. But that's not the one that prompted this post. 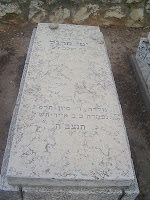 Of the remaining eight, Jente came to Israel in 1943 after her husband was killed. She had a daughter who chose to live out her days in Poland and another daughter here in Jerusalem. The daughter here in town has a daughter whom I know and who was, in fact, here in my office last week. Here Jente was known as Jetty and her documents show her to have been born 12 June 1883, rather than the 18 June 1880 that is on the birth record. Using the date on her birth record, she was a few weeks short of ninety when she died.

The seventh child, Szyje Isak, was a butcher in Skalat and was killed in the Holocaust. I know nothing about his family. In fact the only information I have beyond the birth record is from a Skalater who lived here and mentioned him among the people he had known. 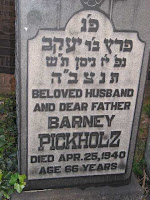 The sixth child, Abysch Abraham, died in Skalat before his fourth birthday.

The second child, Perec, who was named for his paternal grandfather, went to the United States in 1902 and was known there as Barney. He married and had a son and a daughter and I am in touch with his granddaughter. Barney died in 1940 in his sixty-second year, but the gravestone says "Age 66 years."

We have a 1912 New York marriage record for another daughter, called Rose, who could be either Bassie Rosa or Raze. The marriage record has her as twenty-six years old, which is closer to the age of Raze, so I have recorded her that way. 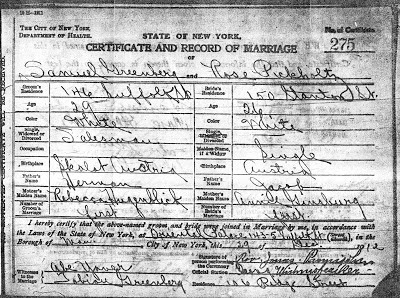 She also appears in a 1907 passenger list as Rosa, age twenty-two. We know that she and her husband Sam Greenberg had a son Max in about 1915, but we know nothing further of them. The curse of common names.

For the other children of Jakob and Henie Malka, we have nothing but birth records, so we have no idea what happened to any of them. Had they died in childhood, there would likely be notes on the birth records. So their lives are a large question mark, with no good prospect for solution.

Back to the results from the JRI-Poland search, where we see a few inconsistencies in spelling and in the names themselves, but nothing noteworthy - with one exception. Raze's mother is not listed as Henie Malka Ginsberg, but as Henie Malka BLEICH of Touste. Normally, I would guess that Henie Malka's parents were Ginsberg and Bleich, but we learned from the first births that she was from Skalat, so Touste is a problem.

At first I acquired only one or two births from each family, but as my budget allowed, I ordered the others.
This is what came for Raze. (Click to enlarge.) Sorry for the quality, that's what there is. 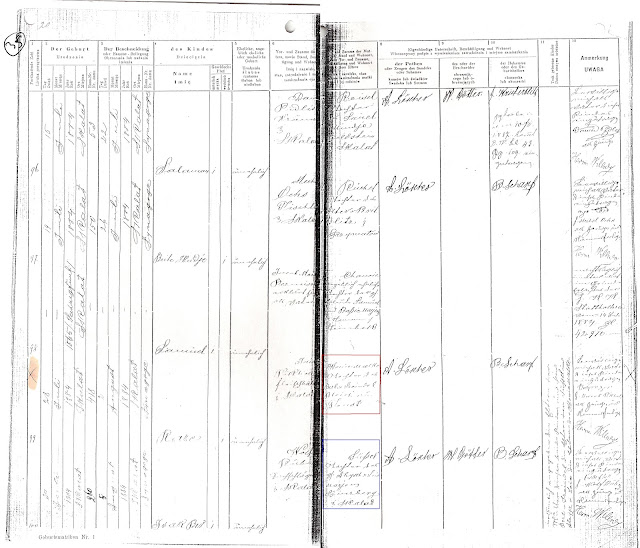 There are five births on this page. (It's a ledger, so some of the center is lost in the spine.) Raze the daughter of Jakob Pikholz and his wife Henie Malka is the fourth, the one with the X in orange on the left. She was born 28 July 1884. The mother's name is in the red box near the center. I cannot make out Henie Malka's father's name, but her mother is Szeindel Bleich of Touste. Our Henia Malka is the daughter of Abysch and Leie Marjem Ginsberg of Skalat.

The solution is on the next line, where we have the birth on 30 July of Isak Ber, the son of Wolf Rubin and his wife Sussel. Susse's parents (in the blue box) are Abysch and Leie Marjem Ginsberg of Skalat.

The recording clerk simply mixed up the mothers' parents of the two newborns.